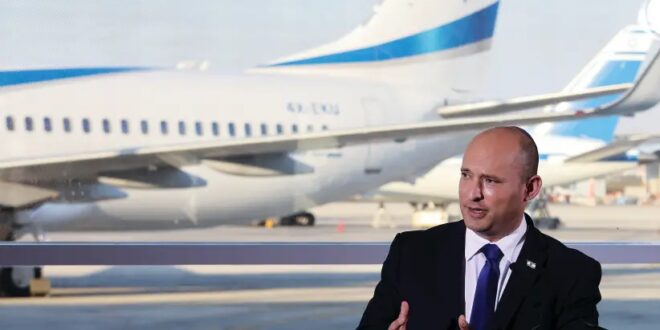 Prime Minister Naftali Bennett is expected to meet with US President Joe Biden at the White House in July or August, Bennett’s spokesman said on Monday.

The White House and the Prime Minister’s Office have been in talks to set a date for Bennett’s visit, likely to be his first trip abroad since becoming prime minister two weeks ago.

The planned visit, so early in Bennett’s term, indicates the Biden administration’s embrace of the new government, made up of parties that span much of the Israeli political spectrum.

The trip is unlikely to take place before July 18, while Congress is in recess.

President Reuven Rivlin landed in Washington on Monday and was expected to meet with Biden in the White House after press time. Rivlin also plans to meet with Speaker of the House Nancy Pelosi.

Bennett views Rivlin’s trip as a sort of test of how he and his views will be accepted in Washington. Both he and Rivlin oppose a two-state solution but are in favor of humanitarian gestures toward the Palestinians and are right-wingers, but they support working with a diverse coalition, a source close to the prime minister said.

Bennett views the Biden administration’s persistence in bringing Rivlin to Washington in his last days in office as a good sign, being that President-elect Isaac Herzog’s views, especially on a two-state solution, are more in line with Biden’s.

Rivlin is expected to convey to Biden that Israel seeks to be part of the conversation as the US and Iran indirectly negotiate their return to the 2015 nuclear deal, specifically on issues of enforcement and defense if Tehran violates the agreement.

Foreign Minister Yair Lapid is set to depart for the United Arab Emirates on Tuesday morning for the first state visit by an Israeli minister and the first since Israel and the UAE entered the Abraham Accords.

Lapid is scheduled to meet several ministers during his trip, including his Emirati counterpart, Abdullah bin Zayed Al Nahyan, State Minister for Economic Matters Ahmed Al Sayegh and Culture Minister Noura Al Kaabi. He will also meet with representatives of the Jewish communities in Abu Dhabi and Dubai.

Lapid is set to dedicate the Israeli Embassy in Abu Dhabi and the Israeli Consulate in Dubai. Emirati government officials and Jewish community representatives will attend the events.

In addition, Lapid will visit Israel’s pavilion at the Expo 2020 world exposition, which will begin in October.
Ambassador to the US and UN Gilad Erdan on Sunday announced he was resigning his post in Washington and would leave as soon as Bennett appointed a replacement.

Erdan’s time in Washington was supposed to end in November.

“It was a true honor to represent Israel to our closest ally,” he said. “During my tenure, I worked to establish ties with the Biden administration, as well as to strengthen the bipartisan support. Those ties were proven during the Gaza operation when the US halted anti-Israel initiatives in the [UN Security Council] and approved additional funding for the Iron Dome.”

Erdan said he plans to continue to represent Israel at the UN.

Post Views: 91
Previous New Issue Of Al-Qaeda In The Arabian Peninsula (AQAP) ‘Inspire’ Magazine – The First Since April 2017 – Calls Colorado Shooter Ahmad Al-Issa ‘Mujahid,’ Urges Muslims To Follow In His Path And Target ‘The American Enemy’ Inside And Outside The U.S.
Next Bennett, Sisi discuss Israeli captives in Gaza, agree to meet