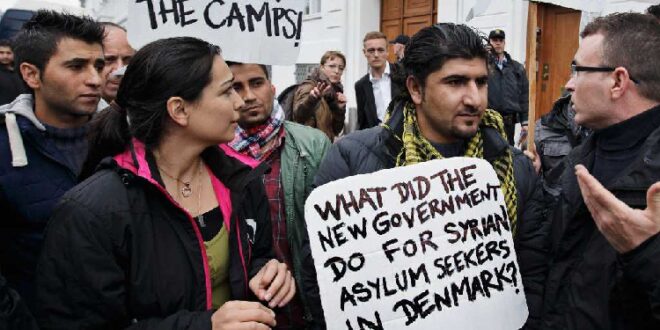 The Syrians of Denmark…An Experience that Hurts Twice

Our colleague Odai Al Zoubi wrote the following on his Facebook page: “The real tragedy for the Syrians in Denmark is that not being expelled back to Syria means that they will remain imprisoned in Denmark, under the mercy of a fascist, ignorant and chauvinistic group of politicians. The Syrians in Denmark’s tragedy is not their expulsion to Syria; it is their lives in Denmark!”

Firstly, Denmark is not in the middle of an economic crisis. It is among the world’s richest and least crisis-ridden countries. It is not a country with a tyrannical or totalitarian regime either. It is among the most liberal and freedom-valuing counties in the world. However, Denmark is also among the most racist countries in Europe, if not the absolute most racist among them. These characteristics are summed up in a formula that would be comical if people weren’t paying its price: the Danish regime refuses, on the one hand, to engage or negotiate with the Bashar al-Assad regime in any way because of the inhumane treatment of his people. However, on the other hand, it intends to expel 94 Syrians to their “sunny” country under the pretext that security is stable in some areas in Syria.

What the Syrians in Denmark are going through warns of a problem that recurs in different frameworks and forms in other countries: the transformation of liberalism and democracy into something akin to religion, whereby there is a demarcation line between insiders who belong and others who are on the outside. The former is entitled to democracy and liberalism, and the latter is deprived of them or only sees little of their fruit, with their share determined by the identity and origin they had inherited.

The values of progress were indeed born in colonial and semi-colonial countries, but the many experiences that followed have taught us that when this progressiveness does not embrace democracy, humanitarianism, and egalitarianism, it can lead to the kind of barbarism that had been crowned by fascism. The theory of an inside that is entitled and outside that is not was shunned by the ideology of human rights that emerged with the defeat of fascism after the Second World War. It suffices, for a reminder, to read the first and second articles of the 1948 Universal Declaration of Human Rights.

The theory of splitting the inside from the outside emerged before the declaration, and it continued to be acted upon subsequently. It expressed itself flauntingly in white South Africa before the nineties. Israel, empowered by being “the only democracy in the Middle East” and that it “turned the desert green,” presented another model. What is happening in the Sheikh Jarrah neighborhood in East Jerusalem is the latest example.

Denmark was the first country to sign the UN Refugee Convention in 1951.

The political game that is supposed to clean up public life is precisely what is dragging it to this swamp: it is the ruling Socialist Democratic Party and the racist Danish People’s Party’s populist attempts at outbidding one another as they compete for the working class’s votes.

All of this despite the fact that Denmark has hosted the lowest number of refugees in 30 years, and the number of Syrians among them, those “imprisoned in it,” as Zoubi wrote, is no more than 32,000 when Denmark has a population of 6 million.

Post Views: 68
Previous Russia and Turkey Agree on Military Free Zone
Next Israel and the Emirates Are the Middle East’s New Best Friends