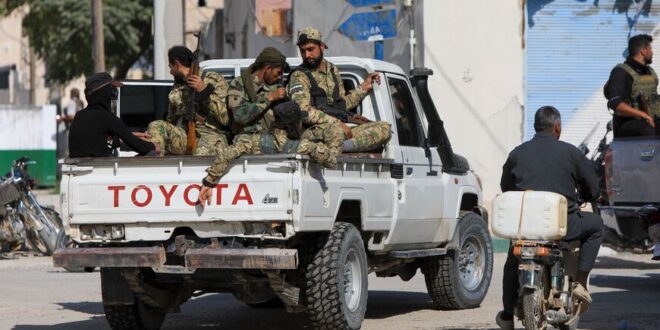 Turkey’s illegal renditions of Syrian nationals back in spotlight

Critics say the arrest of Syrian citizens and their extradition to Turkey violates Turkish and international humanitarian law.

The rendition of Syrian nationals to Turkey, where they are prosecuted and jailed on thinly evidenced terror charges, has returned to the spotlight with the life sentencing by a Turkish court of three men of the Syriac Orthodox Christian faith to life in prison. Lawyers say the June 22 verdict violates Turkish and international humanitarian law and reflects the unlawful actions of Turkish forces and their Sunni rebel proxies in the large swaths of territory that Turkey occupies in northern Syria.

Jamil Gorges, Amad Jassim Suud and Muhsin Garbhi Ahli were detained in their village outside the northern Syrian town of Ras al-Ain soon after Turkish forces invaded the area in October 2019, part of an operation codenamed Peace Spring that was approved by then-US President Donald Trump. They are among at least 63 Syrian nationals — some rights monitors say there could be as many as 200 — who were apprehended by the Turkish-backed Syrian National Army forces on charges of membership in a terrorist organization, namely the Syrian Kurdish People’s Protection Units. The YPG operates under the umbrella of the Syrian Democratic Forces, the United States’ lead partner in the battle against the Islamic State. Most of the SDF are ethnic Arabs.

SDF spokesperson Kino Gabriel told Al-Monitor that some 75 SDF fighters had been detained and illegally transferred to Turkey. “There are also others who worked in the civilian administration who were also arrested, tortured and tried in Turkish courts. This is a massive violation and comes on top of widespread abuses by Turkey’s proxies in the Syrian National Army who are looting, robbing, killing, raping in Syrian lands occupied by Turkey,” Gabriel said.

The State Department did not respond to Al-Monitor’s request for comment on the treatment of members of its SDF-linked partners.

UN investigators said in a March report that the Syrian National Army was involved in abductions, hostage-taking and rape of women in northeast Syria, primarily targeting civilians and Yazidis.

Human Rights Watch said in a February report that it had obtained documents that showed “detainees were arrested in Syria and transferred to Turkey in violation of Turkey’s obligations under the Fourth Geneva Convention as an occupying power in northeast Syria.”

The report went on, “A Human Rights Watch review of the documents shows that in most cases, the Turkish authorities have not produced evidence that the detainees were active fighters with the Kurdish-led authorities or that they committed crimes. Family members and relatives said that those detained held administrative or low-level roles within the party.”

The Christians who were sentenced this week were affiliated with a Syriac Christian militia that also fought under the SDF’s command against the Islamic State. In their testimony, which was seen by Al-Monitor, two of the men denied any connection to the YPG and said they were protecting their village called Al-Qasemiya, which lies 39 kilometers (24 miles) south of Ras al-Ain. A third said he had been “forced” to join the YPG. All three denied the prosecutor’s charges of membership in a terrorist organization, premeditated murder and seeking to undermine the unity of state and country.

Aram Hanna, a spokesperson for the Syriac Military Council contacted via WhatsApp, told Al-Monitor, “Our fighters were defending our village from Turkish occupation. Three of them were kidnapped and taken to Turkey.”

Mustafa Vefa, a lawyer who represents the Christians, said Syrian National Army forces had demanded $3,000 from fighters they captured. “Those who could pay were freed. My clients did not pay the money and were handed over to Turkish forces.”

Vefa said the men had been badly beaten and tortured by the Syrian National Army forces and had photographic evidence to prove it. Vefa said most Syrian detainees faced similar abuse at the hands of Turkish security forces during their interrogation, which is typically conducted through translators. “The defendants just sign what’s put before them. They have no idea what they are even signing, and it’s then used against them in court,” Vefa said.

Ibrahim Etki, who represents several Syrian nationals illegally rendered to Turkey, corroborated Vefa’s depiction of their treatment. Most of these people stayed behind when YPG forces withdrew from the areas invaded by Turkey during Operation Peace Spring. Some of them hid out of fear and others responded to calls by local mukhtars to present themselves “only to be asked to cough up 7,000 Turkish liras [about $1,000 at the time] if they wanted their freedom. Those who couldn’t pay got carted off,” Etki told Al-Monitor. He said Turkey’s actions were in breach of Turkish and international law at several levels.

“These people were detained by foreign forces in a foreign country and were deemed suspect on the basis of testimony provided by foreign forces, much of it manufactured or distorted. Under Turkish law, Turkish security forces are required to provide cause for detention to the authorities,” Etki explained.

Moreover, in many cases defendants underwent interrogation without the presence of a lawyer. “Many of these people were tortured into making false statements out of fear of further physical punishment,” Etki said.

In an unusual move, the court reviewing the case of the three Syriac Christians demanded that the Turkish security forces involved take the witness stand.

Vefa said they told the court they had never seen the three men, thereby confirming that they had been arrested by foreign forces. As a result, the presiding judge reduced their sentences. But the prosecutor’s office appealed the ruling and the court eventually sentenced them to life. “The court was unable to resist pressure from above,” Etki said.

The Turkish Embassy in Washington did not respond to Al-Monitor’s request for comment.

Post Views: 151
Previous Israel and the Emirates Are the Middle East’s New Best Friends
Next Turkey stalls on withdrawal of foreign forces from Libya