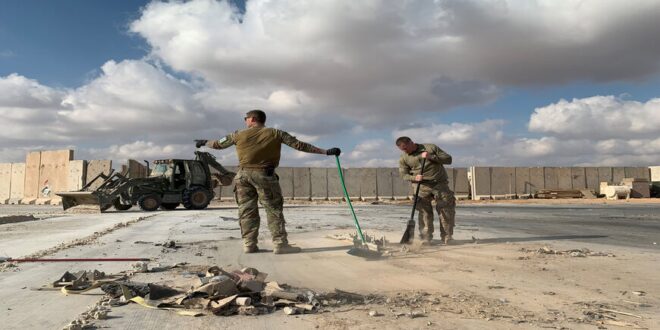 US Embassy, Ain al-Asad base targeted in Iraq as militias up tension

Following the US strike on militias’ bases last week, the US Embassy and Ain al-Asad base were targeted by a drone and rockets.

The US Embassy in Baghdad, in the heart of the Iraqi capital’s Green Zone, was the intended target of an armed drone the night of July 6. The C-RAM defense system of the embassy was able to bring it down before an attack.

Just hours before, Ain al-Asad base in Anbar province of western Iraq was hit by three rockets. The attack left no casualities.

The drone was launched from a residential area near the airport in Baghdad. This is the first time that militias have used a public place for launching an attack against US sites.

This comes a few days after US airstrikes were carried out against targets belonging to Iran-backed militias along the Iraqi border with Syria. The airstrikes — targeting two sites in Syria and one in Iraq just before dawn June 28 — left several militia members dead and came in response to continued attacks by the militias against US bases and convoys.

In a strong reaction to the US airstrikes, militias declared open war against the United States, according to a statement issued by the Coordinating Committee of the Iraqi Resistance.

In the near future, the escalation can be expected to increase based on the current circumstances, due to the following reasons.

First, the militias are not willing to stop the attack against the US interests, despite the previous promise of their leaders to the government of Prime Minister Mustafa al-Kadhimi to allow him to reach an agreement for the withdrawal of US troops within a set period of time. Although over 2,500 US troops have left Iraq during three rounds of strategic dialogue that began last year, the militias’ attacks continued without pause. This includes even during the time that the Coordinating Committee of the Iraqi Resistance declared a cease-fire with the United States last year following mediation by UN representative Jeanine Hennis-Plasschaert in a meeting with the Popular Mobilization Units chief of staff Abo Fadak.

Second, the attacks put renewed focus on the US force deployment in Iraq, as Washington considers next steps in a drawdown of combat troops at the request of the Iraqi government. Although the attacks have yet to lead to serious causalities — which is a red line for Washington — the circle of attacks has expanded to include a variety of targets in different parts of Iraq, including in the semi-autonomous Kurdistan Region, and the United States, as well as NATO and the Iraqi government, will need to consider measures both to respond to and deter future attacks.

Third, the negotiations among the parties to the Joint Comprehensive Plan of Action (JCPOA) and the United States have yet to begin the seventh round of talks on a new Iran nuclear deal. The provocations by Iran-backed militias in Iraq can be linked to tensions and developments in US-Iran relations.

In such circumstances, Iraq faces a very sensitive time, as the government is trying to promote calm in advance of the upcoming elections scheduled for October. An escalation in US-Iran hostilities will be felt in Iraq.