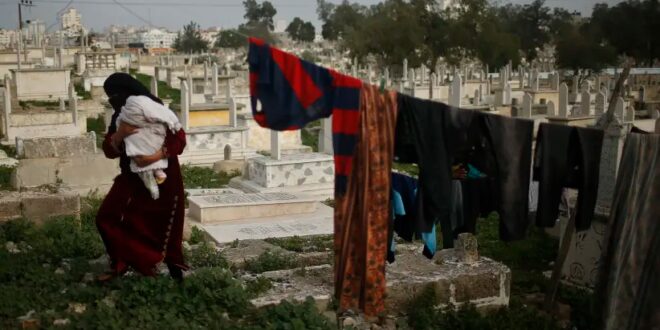 Operation Guardian of the Walls caused millions of dollars in damages to Gaza, claimed the World Bank, which is hoping to mobilize donors.

The Gaza war in May caused structural and economic damage to the coastal enclave valued at $570 million, the World Bank said in a preliminary report published on Tuesday.

It proposed that $485 million should be spent on rebuilding efforts over the next two years.

“With this assessment, we hope to mobilize donors’ support to help restore dignified living conditions and livelihoods in Gaza and lead the way to recovery.” said Kanthan Shankar, World Bank Country Director for the West Bank and Gaza.

The bank’s Rapid Damage and Needs Assessment (RDNA) report was presented to the Ad Hoc Liaison Committee, which met virtually on Tuesday to discuss donor funding for the Palestinians.

The 15-member body includes representatives from Israel, the Palestinian Authority, the United Nations and the United States. It typically meets twice a year, in the spring and fall.

The AHLD parley comes as the international community seeks a safe mechanism to prevent Hamas from confiscating for military use cash and material assistance intended for civilian humanitarian aid in Gaza.

“We are committed to seeing to it that humanitarian aid gets to the Palestinian people for humanitarian relief” without “empowering Hamas,” US State Department spokesman Ned Price said.

“We will continue to work with our partners, whether that’s Egypt, whether that’s the UN and its institutions, to see to it that we can do those two things: to provide that relief to the Palestinian people without it making its way into Hamas coffers,” he added.

At issue in particular is dual use items needed to rebuild homes and roads, but which could also be used by Hamas for terror tunnels. Israel has also linked the entry of dual-use items into Gaza with the Hamas release of the remains of two soldiers killed in the 2014 war and two Israeli citizens held captive there.

Foreign Ministry Deputy Director-General for Middle East Affairs and the Peace Process, Haim Regev, told the AHLC meetings that the release of the soldiers and captives would advance Gaza reconstruction.

He blamed Hamas, which forcibly rules the Gaza Strip, for the dire economic situation there, explaining that it preferred to invest in terror then improving life for its own citizens.

Israel also presented projects to advance the Palestinian economy in the West Bank. The World Bank report, however focused exclusively on Gaza and the impact of the 11-day war in May, known as Operation Guardian of the Walls. It found that the war cost Gaza $380 million in physical damage and $190 million in economic losses.

The World Bank’s damage assessment of Gaza is the most extensive on the impact of the war on the enclave and detailed a wide ranging assessment of the damage caused to homes, road and infrastructure, as well as to medical facilities and schools.

Israel has spoken of the terrorist targets it leveled with its 1,500 retaliatory airstrikes on Gaza and of the damage to Israel by the 4,300 rockets Hamas launched against it.

This report, published together with the UN and the European Union, listed the civilian damage and the harm caused to the impoverished enclave where before the war unemployment was at 48% and 57% of the population lived below the poverty line.
The 2.1 million Palestinians living in Gaza were already in a vulnerable economic situation when the COVID-19 pandemic broke out and their situation worsened as the enclave’s GDP contracted by 12.3%, according to the World Bank.

Prior to the war, the bank had projected that the Gaza GDP would grow by 2.5% this year but it may contract by 0.3%, Shankar said. Unemployment is now at 50% and 60% of the population is living below the poverty line, the Bank added.

Its report showed that 4,100 housing units were damaged in the war, of which 1,600 were totally destroyed.

The remaining 2,500 abodes were partially impacted. Some 91% of the damaged homes were apartments.

The report call for $40-60 million for immediate interim housing, including rentals and the start of the repair process which it estimated will take longer than 24 months.

In addition, the report said that seven hospitals, six clinics and one laboratory sustained damage; 116 kindergartens were damaged, as were 140 buildings housing public schools. Nine colleges and universities were also harmed.

Some 41 schools run by the UN Relief and Works Agency were also harmed by bombings and explosions and an additional 61 UNRWA educational structures were damaged where 700,000 Palestinians temporarily displaced by the bombings were given refuge.

Sites of significant cultural importance sustained damage, such as the Anthedon Harbor and the Byzantine Church in Jabaliya, according to the Bank, but no description was given of the destruction.

On the issue of roads, the Bank stated that 264 meters of road were destroyed and that obstructions to traffic were present along 366 meters of those arteries. Detours have increased travel time and transportation costs, the Bank said.

Water shortages have increased, the Bank said and there was a “damaged water pipeline across 135 locations and 1,500 domestic water connections,” the Bank said. This includes water meters, 30 water wells, three water reservoirs in Gaza and Rafah cities and one water pumping station in Khan Younis, it added.

Damage to the wastewater infrastructure includes sewage pipelines across 1010 locations five wastewater pumping stations, “including the Beit Lahia station, which was completely destroyed and is no longer operations,” the Bank said.

Gaza electricity, also in crisis prior to the war, is now held together with “temporary connections” and “stop-gap measures,” the Bank said, adding that recovery costs are estimated at $20 to $30 million. It includes the reconnection of power lines and upgrades to the power grid.

Repairs to the electricity, water and sanitation systems as well as recovery steps for the health system, should have top priority. The bank also advocated for the immediate creation of 20,000 full-time jobs.

UN Special Coordinator for the Middle East Peace Process Tor Wennesland said that everything must expedite the Gaza recovery.
“The cessation of hostilities reached last month has largely held but remains fragile. The UN is continuing its diplomatic engagements with all concerned parties to solidify the ceasefire,” he said.

“In the meantime, we are also ensuring that we do everything we can to meet the most urgent needs that would allow Palestinians in Gaza to begin the process of recovery as quickly as possible,” Wennesland said.

EU Representative Sven Kuhn von Burgsdorff said that “the recovery of Gaza must be backed by a meaningful peace process that will bring security and dignity for all. Gaza’s recovery will depend much on the progress of the political process and a negotiated solution. Palestinian unity and democratic renewal through free and fair elections are as well of crucial importance.”