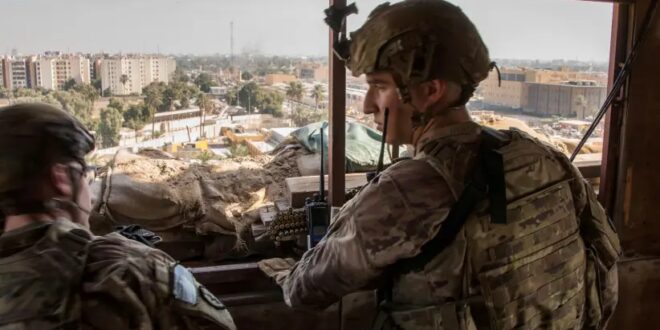 Iran has done this before, using pro-Iranian groups in Iraq to wage an insurgency against America after the US-led 2003 invasion of Iraq.

Daily rocket and drone attacks on the US in Iraq are no longer just the harassment that began in May 2019. The targeted attacks are increasing, and they also involve more sophisticated drones than in the past.

While there have been no American deaths from these attacks since the spring of 2020, the overall picture is of a rising conflict in which Iran has declared war on the US in Iraq.

The latest attack took place Thursday morning on the US Embassy in Baghdad. It followed daily attacks against US forces in Erbil, capital of the Kurdistan Region in Iraq; Al Asad base in western Iraq and the targeting of US forces in Syria since July 4.

Iran has done this before, using pro-Iranian groups in Iraq to wage an insurgency against the US after the US-led 2003 invasion of Iraq. In a twist of irony, Washington had gone into Iraq to remove Saddam Hussein. Saddam was a vicious opponent of Iran, who also committed genocide against Iraqis, targeting Kurds and Shi’ites.

Once he was gone, however, the Iranians moved into Iraq, using pro-Iran Shi’ite groups, such as the Badr Organization. They then mobilized proxies to attack the US. This resulted in hundreds of American soldiers being killed. But the US did not retaliate, preferring the illusion that these were some kind of indigenous attacks.

Iran aided its pro-Iranian militias in Iraq with weapons, including 107-mm. rockets and explosively formed penetrators (EFPs). The EFPs killed at least 196 American troops, according to reports.

That appeared to end in 2011 when the US left Iraq. It returned in 2014 to fight ISIS, and for a while, the US was not targeted. However, in 2017, the pro-Iran militias, led by Kataib Hezbollah, Asaib Ahl al-Haq and others, said the US should leave Iraq. It did not leave, since it had been invited by the Iraqi government.

The official line of the US-led coalition is that the attacks against its forces in Iraq endanger Iraqis. This is true; some Iraqis have been wounded and even killed.

“Each attack against the Government of Iraq, Kurdistan Region of Iraq and the Coalition undermines the authority of Iraqi institutions, the rule of law and Iraqi National sovereignty,” coalition spokesman Col. Wayne Marotto tweeted Thursday. “These attacks endanger the lives of Iraqi civilians, and the partner forces from the Iraqi Security Forces, Peshmerga and Coalition.”

However, the larger context is that it is not just harming Iraqis. This is a concerted and coordinated campaign against the US. It is not a simple campaign, either. The use of drones in attacks is part of a new strategy. So far, the strategy appears to be designed not to inflict many casualties on the US. In fact, the rocket barrages have been relatively small, sometimes up to a dozen rockets, but usually just a few.

A drone struck a CIA hangar in Erbil in April, appearing to send a message that Iran knows where America’s secrets are hidden. Drones also targeted an area where the new US Consulate is being built near Erbil in the Kurdistan Region. The message is that the US is not safe in Kurdistan, a peaceful and usually safe area.

Iran’s use of drones and rockets provided to the militias in Iraq against diplomatic sites and also against the US military is unprecedented. While Iran has supplied rockets and drones to Hamas and Hezbollah, in Iraq, the role of the Islamic Revolutionary Guard Corps and Iran’s guidance appears more closely linked to Tehran.

This is because it is clear that Tehran can dial up the attacks when it wants to. This time the escalation began on July 4. It was a message that coincided with the US leaving Bagram Air Base in Afghanistan. Iran thinks it can push the US out of Iraq at the same time.