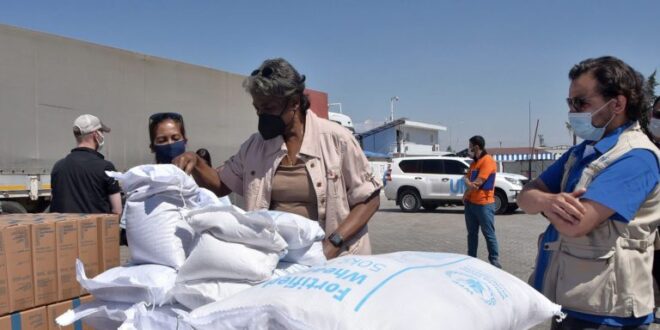 The Point of No Return? Cross-Border Aid in Syria Under Threat

The Security Council will vote today on two resolutions to extend Syria’s cross-border aid, after deliberations over the number of approved border crossings, time frames, and potential vetoes.

This negotiation will pose a test following the Biden-Putin summit, as Russia has consistently used its veto power to support Syrian President Assad.

This pressure point comes amidst economic crisis, water crisis, and escalating COVID-19 concerns, as well as a massive increase in humanitarian needs.

Nearly 3.4 million Syrians are at risk of imminently losing access to humanitarian aid currently delivered through multiple border crossings and facilitated through United Nations Security Council Resolution 2533 (2020), which is set to expire on July 10. Since Resolution 2165 (2014) enshrined a process enabling legal cross-border humanitarian assistance to opposition-controlled areas of Syria, aid has been hamstrung by subsequent short-term authorizations. The initial resolution approved four crossing points—Bab al-Salam, Bab al-Hawa, Al Yarubiyah, and Al-Ramtha. However, Russia has progressively limited the process through the Security Council in defense of sovereignty claims by Syrian President Bashar al-Assad’s regime, and consequently, the current resolution only permits aid across one border crossing, at Bab al-Hawa in Idlib governorate on the Syria-Turkey border. The Council recently debated a resolution drafted by Ireland and Norway to renew the mechanism for cross-border humanitarian aid by UN agencies and partner organizations into northern Syria; this proposal aimed to sustain use of Bab al-Hawa in addition to resuming use of al-Yaarubiyah border crossing to Iraq to address humanitarian needs in the northeast. However, due to push back from Russia and China, a new resolution was put forward Wednesday to ostensibly renew the existing process for another year, using only one crossing at Bab al-Hawa. On Thursday, Russia reportedly proposed a separate resolution for the same single crossing but only for six months, with the potential for extension. Both resolutions are expected to go to a vote today. In a recent Security Council briefing, Acting Under-Secretary-General for Humanitarian Affairs and Emergency Relief Coordinator (USG/ERC) Ramesh Rajasingham asserted, “With ninety percent of people in need requiring assistance for their survival, they would face a truly catastrophic situation [without a new resolution]. There is simply no substitute for the cross-border operation.”

According to the UN Office for the Coordination of Humanitarian Affairs (OCHA), close to 44,000 trucks have crossed the Syrian border through these UN operations since July 2014 from Turkey, home to over 3.6 million Syrian refugees. Highlighting the crucial nature of such operations, over eighty percent of Syrians in northwest are in need of humanitarian assistance. Yet, China and Russia reinforce the Assad regime’s ironclad grip on all aid within Syria’s national borders through the capital city, Damascus. While some aid from regime-controlled to opposition-control areas is logistically feasible, albeit dangerous for aid workers and politically contentious, it is not viable at scale. The regime only permits aid delivery under certain conditions that sacrifice humanitarian principles of impartiality and independence, limiting the response to opposition-controlled areas to bolster its own political influence. “Cross-line operations can complement, not substitute for, a well-funded cross-border operation to north-west Syria,” affirmed USG Ramasingham.

The debate in the Security Council on humanitarian access in Syria is yet another snapshot of the dynamics of great power competition between the United States, Russia, and China, and how this shapes international security and humanitarian efforts. Russia has consistently used its veto to support the Assad regime. President Joseph Biden reaffirmed the U.S. position, emphasizing the necessity of such humanitarian assistance, at his recent summit in Geneva with Russian President Vladimir Putin, though the U.S. remains wary of lifting counterterrorism measures in several places, which have been reportedly impeding impartial humanitarian efforts. U.S. Ambassador to the UN, Linda Thomas-Greenfield, recently traveled to the Turkish-Syrian border and argued for the necessity of three approved crossings for aid delivery. Yet, her Russian counterpart, Vasily Nebenzya, has stated that calls to reopen additional border crossings, beyond the one remaining at Bab al-Hawa, are a non-starter, in addition to reportedly asserting Russia’s disapproval of a year-long (as opposed to shorter) authorization. Furthermore, Russia weaponizes counterterrorism concerns for aid reaching the jihadist group, Hayat Tahrir Al-Sham (HTS), in Idlib to preclude assistance for millions of civilians in need. In closed Council consultations on Syria on Tuesday, Russia reportedly skipped negotiations, while China expressed openness to extending cross-border assistance in return for the easing of unilateral sanctions on the Assad regime, a consistent ask that remains challenging for other Council members.

Russia has also argued that the Syrian presidential election in May reaffirmed Assad’s legitimacy, and that aid should consequently be centralized through the regime. Yet, American and European leaders called the election “neither free nor fair.” Assad claimed ninety-five percent of votes, which only took place in his areas of territorial control, using the election as a show of strength and domination. Syria was appointed to the World Health Organization’s Executive Board in May—a symbolic affront given the scale of attacks on medical centers and health workers by the Assad regime and its partners throughout the conflict—a move that prompted opprobrium from the international community. This pressure point for humanitarian assistance comes at a time of severe economic crisis, water crisis, and escalating COVID-19 concerns, as well as a twenty percent increase in humanitarian needs in the past year. Basic goods have increased in price by 313 percent since March 2020, tied to the volatile value of the Syrian pound. After a decade of war in Syria, 13.4 million people rely on aid. If the authorization for cross-border humanitarian access lapses, aid organizations will need to shift to solely operating through local partners and limited cross-line operations in Syria, debilitating the scale of aid delivery and leaving the response utterly insufficient to the need. The impetus is now on the Security Council to race against the clock to reach an agreement facilitating cross-border humanitarian operations in northern Syria.

Post Views: 110
Previous The Changing Nature of Espionage & Intelligence during the Pandemic
Next Erdogan: ‘We are present in Libya, Iraq, Syria, Azerbaijan, and will remain there’