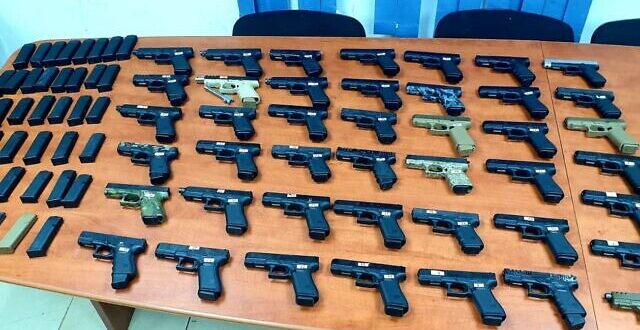 Police investigating whether the terror group played role in thwarted bid to bring 43 guns and ammunition worth around $800,000 over Israel’s northern border

Israeli security forces foiled an attempt to smuggle dozens of weapons from Lebanon into northern Israel overnight Friday, with police and the Israel Defense Forces announcing on Saturday that they were investigating whether it was carried out with the help of the Hezbollah terror group.

In a statement, police said the 43 weapons and ammunition seized were worth NIS 2.7 million (approximately $820,000).

According to Hebrew media reports, it was the largest stash of weapons intercepted in recent years. There were no reports of any arrests.

The smuggling attempt near the village of Ghajar was carried out using both “overt and covert methods,” the army said, without giving further details.

Hezbollah has long maintained control over the area adjacent to the border with Israel and is unlikely to have been unaware of such smuggling operations.

The IDF released video footage it said was of the smugglers during the incident.

Last month Israel arrested a suspect and seized a number of weapons during an apparently similar smuggling attempt.

According to the police, a resident of Ein Qiniyye, a Druze village in the Golan Heights, was arrested in a field near the town of Metula, adjacent to the border with Lebanon, as he was attempting to smuggle the supply of weapons in a tractor, under the guise of agricultural activity. In the tractor the suspect was driving, 12 pistols, worth around half a million shekels ($140,000), were found and seized.

Also last month, Israeli security forces arrested an Arab Israeli father and son suspected of smuggling a large amount of hashish and firearms into Israel from Lebanon, potentially on behalf of the Hezbollah terrorist organization, according to the military.

The terror group is known to fund its activities through drug sales around the world, including producing large amounts of hashish in eastern Lebanon.

Post Views: 189
Previous CPC : Not the Party of Mao and Revolution… But of Counterrevolution and Capitalism-Imperialism
Next Oman’s foreign minister: We won’t be 3rd Gulf country to normalize Israel ties