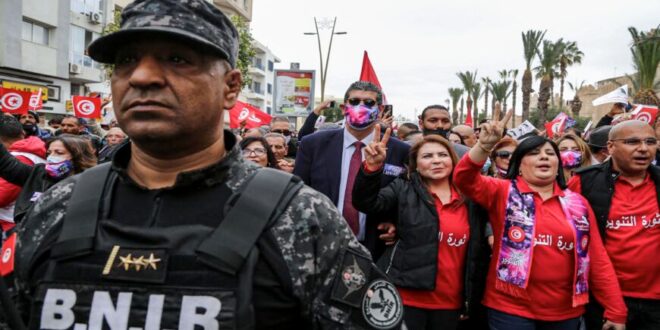 On the evening of the same day, Moussi was physically attacked by Seif el-Din Makhlouf, head of the right-wing Karama coalition, which is close to the Islamic Ennahda movement, during a parliamentary session scheduled to discuss a draft basic law to approve an agreement that would allow the opening of a Qatar Fund for Development office in Tunisia.

The attacks against Moussi raised the ire of Tunisian parties and organizations. The premiership condemned the incidents in a statement on June 30 as an attack on women and the gains they have achieved thanks to the struggles of Tunisian women. The premiership further stressed its “absolute rejection of all practices that disrupt the democratic system and affect the stability of the state and the normal functioning of its institutions.”

In a statement issued on July 2, speaker of parliament Rachid Ghannouchi, who is also the leader of Ennahda, expressed his shock at the attack and condemned it, and he dismissed the behavior as an irresponsible act that fails to honor the parliamentary institution that enacted legislation criminalizing all forms of violence, especially against Tunisian women.

In a statement on July 1, the National Observatory for the Prevention of Violence against Women called on the Public Prosecution to track the perpetrators of what it described as a crime, and condemned the violent attacks on Moussi that compromised her dignity inside the parliament in front of everyone.

For its part, the Tunisian General Labor Union — Tunisia’s largest trade union organization — condemned the attack in a statement on June 30 on the part of the “terror bloc.”

Radhia Jerbi, president of the National Union of Tunisian Women, said in a post on the union’s Facebook page on July 1 that the behavior of the two parliament members against Moussi does not represent the Tunisian people, who preserve the dignity of women and their rights. She called for lifting their immunity and referring them to the judiciary on charges of severe assault and insulting the sanctity of parliament.

Moussi and her party had staged a sit-in inside parliament on June 29 in protest of the draft law on the agreement to establish an office for the Qatar Fund for Development in Tunis. Despite the opposition, parliament approved the law late on June 30.

On July 1, Ghannouchi filed a complaint against the parliament members of the Free Destourian Party bloc for disrupting the plenary session on June 29-30. He called on the Public Prosecution to authorize the use of the public force to disperse the sit-in.

Moussi and her party are staunch opponents of Islamic currents, including Ennahda and the Tunisian branch of the International Union of Muslim Scholars.

This is not the first time the Tunisia parliament’s image is shaken, as the building has witnessed previous quarrels and exchange of insults among rival parliament members.

On June 14, Minister of Higher Education and Scientific Research Olfa Ben Ouda felt unwell and required a medical examination after she was forcibly expelled from the session hall by the Free Destourian Party. Members of the party used loudspeakers and shouted the French slogan “Degage” (Leave) in the face of Ben Ouda, which the head of the plenary session, Samira al-Shawashi, considered “an unacceptable attack against the minister.”

On Jan. 27, Moussi published a video showing Makhlouf (head of the Karama coalition) deliberately seizing her phone as she filmed him without permission inside parliament.

A video clip published on Oct. 2, 2020, showed Makhlouf attacking Moussi and insulting her under the dome of parliament.

Munira al-Ayari, a parliament member from the Democratic Current, believes that what is happening in parliament are shameful scenes that have offended parliament, Tunisia and all of its people. She told Al-Monitor the recent incidents are a systematic and deliberate policy on the part of the parliamentary majority — in reference to the Ennahda movement, an ally of the Karama coalition. She accused Ghannouchi of remaining silent and avoiding an official position against these aspects of violence.

For his part, Ennahda parliament member Salim Basbas told Al-Monitor the scenes of violence in the Tunisian parliament are the result of the continued provocative approach of Moussi. He said some parties that ascended to parliament after the 2019 elections do not have moral controls that would allow them to coexist with those they disagree with. He pointed out that such scenes greatly harm the image of parliament as the first authority in the country.