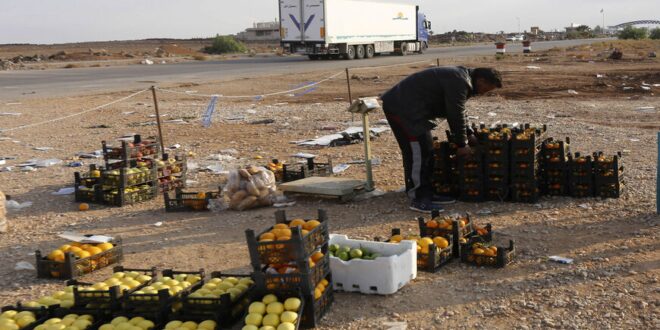 What does Saudi ban on Syrian produce mean for Assad’s government?

The kingdom’s decision to ban the import of produce from the government-held areas is viewed as a sign that the kingdom has not changed its position toward the Syrian government.

Speaking to the local Al-Watan newspaper July 6, Fayez Qassuma, vice president of the Export Committee in the Damascus Chamber of Commerce, said that Saudi Arabia banned the entry of fruit and vegetable trucks coming from Syria, because the boxes lacked a label identifying the type, weights and harvesting date of the goods. The Saudi ban came in light of the recent amendments of Saudi import rules.

Qassuma noted that the Chamber of Commerce addressed the chairman of the Federation of Saudi Chambers in a letter in this regard, so as to resolve the problem and facilitate the entry of Syrian trucks in order to save their owners heavy losses.

Trucks have been waiting for more than 15 days on the Jordanian side of the Nassib border crossing to be permitted to enter into Saudi Arabia.

Truck drivers have been waiting in very hot weather, and they lack enough fuel to cool the produce in the refrigerators for an extended period, putting the crops at risk.

In September 2020, Saudi Arabia allowed entry of Syrian trucks into its territory after an eight-year ban, by granting Syrian drivers an entry visa at the Jordan-Saudi Haditha border crossing, entitling them to cross into the Gulf countries through Saudi territory.

The Saudi ban on imports of fruits originating from the Syrian government-held areas came amid fears of finding drugs hidden in the hollowed-out vegetables and fruits that Saudi Arabia has been recently intercepting at the border, which resulted in tougher rules on imports, especially those coming from Lebanon and Syria.

Muhannad al-Katee, a Syrian opposition leader based in Saudi Arabia, told Al-Monitor, “Never before has Saudi Arabia prevented Syrian trucks from entering its soil, particularly since the trucks are for the private sector — and more precisely, they consist of personal properties. The Jordanian side usually prevents the entry of Syrian trucks.”

He said, “The recent ban is probably linked to the ban on Lebanese imports after [Saudi authorities] seized a drug cargo that Hezbollah tried to bring into Saudi Arabia, or because Lebanon is transporting its products in Syrian trucks.”

Katee, who is close to Saudi Arabia, noted, “Away from the Syrian regime propaganda, Saudi Arabia is officially, publicly and clearly in favor of United Nations Resolution 2254 regarding Syria, and the political transition.’

‘We have to differentiate between the Saudi position and the Omani or UAE position [regarding the Syrian regime]. Saudi Arabia, which sponsors the [opposition’s] High Negotiations Committee, cannot approve the regime nor make it afloat.”

He stressed that the Saudi rapprochement with the Syrian government, if this ever happens, will exacerbate the Syrian opposition crisis, which is already failing to gain the trust of the Syrian people and international community, for subjective and objective reasons.

In the same vein, Ahmad Hassan, a Syrian journalist residing in Turkey, told Al-Monitor that banning entry to Syrian trucks is part of the Saudi measures to counter the smuggling of drugs from Lebanon and Syria, because there is no joint Saudi-Syrian coordination mechanism that ensures Saudi knowledge of the government’s import procedures. Lately, the number of cargos containing drugs coming from Syria into Saudi Arabia has increased, he said.

He noted, “Despite the Saudi warnings to the Syrian authorities in this regard, the situation has not changed. The trucks have been stopped, in the wait of measures that would guarantee [policy] changes in Syria that would be also accepted by Saudi Arabia.”

Hassan added, “The Saudi position toward the Syrian regime is centered on maintaining the same position unless Saudi Arabia receives signs indicating that the regime is ready to make radical changes as part of Resolution 2254. Saudi Arabia considers that this change cannot be limited to promises. Rather, there should be concrete practical measures as part of the solution. Saudi Arabia has repeatedly stressed that there will be no change in the Saudi position as long as there is no fundamental change by the regime. The information provided by the regime in this regard has been denied, [in reference to reports that there are security meetings with Saudi Arabia]. The regime is circulating in the media rumors that there is rapprochement with Saudi Arabia, as a pressure tool on Saudi Arabia, but it is useless at the moment.”

He stressed that the United Arab Emirates tried to persuade Saudi Arabia to normalize ties with the Syrian government, but the Emirati attempts have so far failed.

He pointed out that there economic relations between the Syrian government and Saudi Arabia are minimal.

Syrian opposition Gen. Asad al-Zoubia, who is close to Saudi Arabia and is based there, told Al-Monitor, “Saudi Arabia continues to reassure us. It stresses its support for the Syrian people in their revolution against the regime, and for a political solution under Resolution 2254. All Russian attempts to keep the regime afloat and bring it closer to Saudi Arabia have failed.”