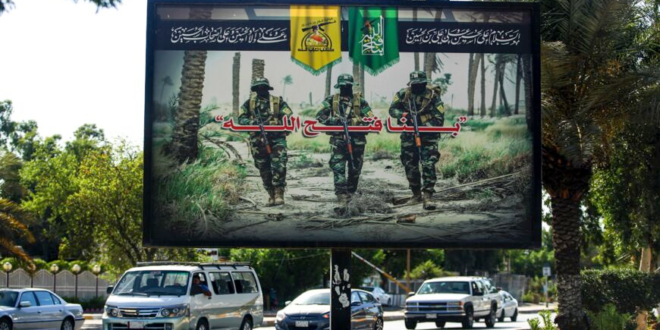 The intelligence chief of Iran’s Islamic Revolutionary Guard Corps (IRGC) encouraged local militia leaders during a recent meeting in Iraq to increase their small-scale attacks against US positions in the country, Reuters reported today.

Militias launched a series of attacks against sites used by US forces in both Iraq and Syria surrounding Taeb’s visit, according to Reuters, which cited three militia sources and two Iraqi security sources familiar with the meeting.

Taeb reportedly encouraged militia officials to continue striking US forces in retaliation for the US airstrikes, but he urged them not to spark a major escalation.

Iran denies it supports attacks on US forces in Iraq and Syria.

Reuters’ report follows at least four attacks with rockets and one with an armed drone against facilities that house US personnel in Iraq and Syria last week. The unusually rapid series of attacks came amid a lull in indirect talks between the United States and Iran over Tehran’s nuclear program.

The Pentagon on Tuesday reiterated its warnings that US forces retain the right to respond.

“We always retain the right of self-defense,” press secretary John Kirby told reporters, noting that “how and when” the United States chooses to respond “are up to the commander in chief,” President Joe Biden.

Kirby offered no confirmation on subsequent local reports about additional attacks with projectiles against bases used by US forces at al-Omar oilfield and Conoco gas field in Syria’s eastern Deir ez-Zor province.

Taeb’s visit followed a visit to Iraq by IRGC commander Ismail Ghaani. The Associated Press reported last week that Ghaani urged calm among militia leaders until indirect talks with the United States over Iran’s nuclear program are able to relieve pressure on his government and the units under his command.

Neither of the contrasting reports have been independently confirmed by Al-Monitor.

Iraqi militia officials have vowed revenge against US forces for last month’s deaths. The trickle of attacks began after the previous US administration abandoned the international nuclear deal with Iran and enacted sweeping sanctions on Tehran’s government.

The Biden administration is seeking to return to the 2015 nuclear agreement, but that has not stopped tense run-ins between US forces and the IRGC and its proxies in the region.

IRGC naval vessels at least twice harassed US Navy and Coast Guard ships in the Gulf earlier this year, which Iran denied.

Both the Pentagon and head of US forces in the Middle East Gen. Kenneth “Frank” McKenzie were scrupulously careful to avoid directly blaming Iranian leaders for the IRGC’s actions.

However, other Biden administration officials have said the administration will hold Iran accountable for hostile activities by its proxies in the region.

The militias have put Iraqi Prime Minister Mustafa al-Kadhimi under intense pressure to urge the forces out. Kadhimi is set to visit Washington later this month to continue discussions with US officials, including about the presence of American forces in his country.