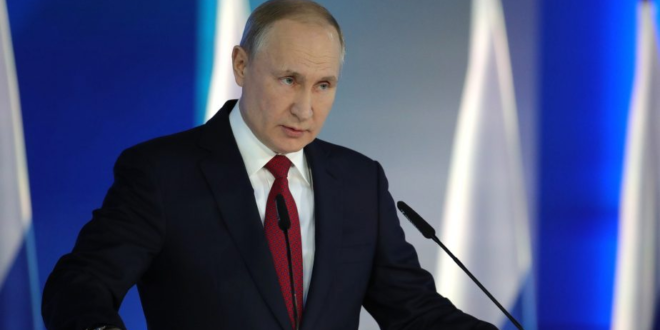 What Russia’s National Security Strategy Has to Say About Asia

The new NSS has some notable differences from the 2015 version on Russia’s approach to the Asia-Pacific – and China in particular.

For the first time since 2015, Russian President Vladimir Putin has updated the National Security Strategy (NSS).

On July 2, Putin signed an Executive Order “On the National Security Strategy.” In a pile of Russian state concepts and strategies, NSS is a key policy document in the security realm, which, according to the law on strategic planning, must be adjusted at least once every six years. Like the U.S. National Security Strategy, it is based on an analysis of external and internal security threats, and lists national interests and strategic priorities in the field of domestic and foreign policy.

The range of the challenges to Russia’s stability addressed in the NSS is wide, from hard security to biosecurity. Curiously enough, the previous strategy foresaw the COVID-19 pandemic, or a similar occurrence: Among the global threats noted in 2015 was the “spread of epidemics, many of which are caused by new, previously unknown viruses.”

The 2021 NSS mirrors Russia’s deteriorating relations with the West, which is mentioned in the text exclusively in negative terms. The current document notes the desire of Western powers to maintain their hegemony in global politics, deliberately erode Russian “traditional values,” and even reconsider Russia’s role and place in world history. The intensity of the confrontation is so high that it significantly narrows the room for maneuver in Russia’s relations with the collective West. Thus, the foreign policy section of the NSS has been greatly reduced. Detailed provisions on Russia’s relations with the United States and the European Union have entirely disappeared in the 2021 version (unlike the previous NSS, which even contained a clause on a possible cooperation with NATO).

Against this background, Moscow’s relations with the two major Asian powers – China and India – are viewed more from pragmatic positions and designated as one of Russia’s foreign policy priorities. At the same time, the drafters of the NSS do not explicitly mention either China or India when talking about Russia’s struggle with the West for moral leadership and competition for the creation of an attractive ideological basis for the future world order. Thus, the RIC (Russia-India-China) triangle is seen in the Kremlin through a regional rather than a global lens.

As highlighted in the strategy, the partnership with Beijing and New Delhi is necessary for Moscow to create reliable mechanisms in the Asia-Pacific region, to ensure regional stability and security on a non-bloc basis. The 2021 NSS consistently mentions the Asia-Pacific region, which suggests that Russia at the highest level rejects the concept of the Indo-Pacific – or, more specifically, its U.S.-centered version.

This more nuanced and selective approach to the Indo-Pacific in general was demonstrated by Putin during the Q&A session at the 16th Annual Meeting of the Valdai Discussion Club in October 2019. When asked about the “Japanese concept of a free and open Indo-Pacific strategy,” the Russian president stated that it would make sense to “pool the efforts of the already established agencies, organizations and even concepts” aimed at creating a large Eurasian partnership.

As pointed out in my recent co-authored paper, Putin effectively put the “Indo-Pacific development strategy” on par with the Shanghai Cooperation Organization (SCO) and other multilateral institutions. At the same time, many Russian official statements reject the military component of the Indo-Pacific Strategy and “rules-based order” narrative, which Moscow believes is being pushed by the United States to contain China and Russia. We argued in our paper that the further development of the Russia’s position toward the Indo-Pacific will very much be determined on which interpretation – U.S.-centered or regional – of the concept will prevail.

Given the conservative nature of the NSS, one change looks groundbreaking. Relations with India and China are combined in just one paragraph in the 2021 NSS, while in the 2009 and 2015 versions they were treated separately, with China preceding India. This suggests that balancing relations with China is becoming increasingly important for the Russian political elite.

The attempt to avoid overdependence on Beijing dictates the way relations with China are characterized in the strategy. While describing the China-Russia strategic partnership, there is no mention of a “new era” (this term from Xi Jinping’s diplospeak has been used in bilateral documents since 2019). Cooperation with China is no longer seen as a “key factor in maintaining global and regional stability” – at least, this is not emphasized publicly. The deletion of the “key factor” formula, which featured in the two previous versions of the NSS, will have political implications, but it is premature as of now to measure the reach of this changed narrative.

Wherever there is something crossed out, there is something written in. The Greater Eurasian Partnership (GEP) prominently made its debut in the 2021 National Security Strategy, although Putin first introduced the term in the 2015 Presidential Address to the Federal Assembly. There is no doubt about the stability and longevity of the concept, which in recent years has become part of the official Russian discourse; however, it still needs to be filled with political and economic substance.

While the goal of the GEP is still rather vaguely formulated in the NSS – “Ensuring the integration of economic systems and the development of multilateral cooperation” – its strategic rationale is crystal clear. Moscow is insisting that no single national economic system should dominate Eurasia. While not overtly stated, the GEP inter alia is an attempt to avoid a Chinese monopoly in Eurasia, by building interaction mechanisms between China’s Belt and Road and various multilateral initiatives. The lack of concrete details leaves Russia with room to maneuver when interpreting the partnership in the future. Still, the most challenging task will be to sell the idea of a Eurasian “spaghetti bowl” to China. Elevating this issue to a strategic level means that the GEP is not just about economic integration, but also a matter of geopolitics with a central question: Who will have the lead in determining the rules of the game across Eurasia?

The NSS lacks a detailed forecast of security developments in Asia, but identifies key regional hotspots of tension that could have an impact on global security. For the first time (in addition to the Korean Peninsula), Afghanistan appeared on the list of such problem areas, which underscores Russia’s view of the situation in the country after the withdrawal of U.S. troops. Indirectly, the strategy expresses concern about Sino-Indian tensions without naming these countries. The NSS states that “the risk of armed conflicts escalating into local and regional wars, including those involving nuclear powers, is increasing.”

As in the past versions, the strategy makes no mention of the South China Sea or Taiwan even though dangerous developments have taken place in these areas in recent years. Russia consistently emphasizes that it is not a party to the territorial disputes in the South China Sea and does not intend to become involved in them. The same can be applied to a potential military conflict around Taiwan, which is apparently outside Russian strategic interests, since Moscow, as in the South China Sea case, is neither an actual nor a potential stakeholder. Discussing the Taiwan problem with the NBC correspondent Keir Simmons, Putin made illuminating remarks that received less scrutiny than it should have from analysts: “There are different assessments [of the situation]. The U.S. has its own assessment. China has its own assessment. Taiwan may have its own assessment.”

This statement allows us to summarize Russia’s Asian policy as seen through the prism of the NSS. To cite this concrete case, Moscow looks at a potential conflict situation over Taiwan from the outside and does not consider it necessary to adjoin to one apex of the triangle. While deepening its partnership with Beijing, Moscow will retain the non-bloc character of its partnership as long as possible, balancing China-Russia relations with the development of ties with other non-Western centers of power. Despite its own increasingly tough current relations with the West, Russia will try not to get involved in the Sino-American rivalry, the main source of dividing lines on the global scene. In the technological sphere, Russia remains on guard with respect to both China and the West, if the use of products or service relates to national security issues.

Dmitri Trenin, director of the Carnegie Moscow Center, aptly notes that the 2021 NSS “seeks to adapt the country to a still interconnected world of fragmentation and sharpening divisions.” He also argues that the main feature of the updated Strategy is its focus on Russia itself. However, the outward view has also undergone changes. In the subheading of the NSS section outlining foreign policy objectives, the former formula “equal strategic partnership” is replaced by “mutually beneficial international cooperation.” This can be regarded as a downplaying of the strategic content of the network of partnerships. But Russian strategists probably had another point in mind: That the stability of strategic partnerships in today’s fluid world is no longer an axiom, but is to be proven through individual and carefully calculated transactions.

For the Asia-Pacific countries, it is important to understand that Russia is not sliding into autarky, but at the same time is giving up illusions that it can join one or another center of power on an equal footing This means that in the possible struggle for a new bipolarity in Asia, Russia will not be on the side of any of the rival camps. It is a challenging task to predict whether such a strategy will be effective, but it coincides remarkably with the idea of one of Asia’s most brilliant diplomats, Minister of External Affairs of India Subrahmanyam Jaishankar: “convergence with many but congruence with none.”