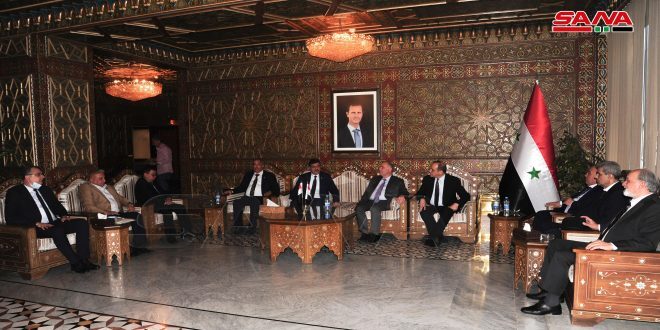 The two sides discussed laying the foundations for cooperation in different domains, particularly fighting terrorism targeting them, with emphasis on its economic form represented by unilateral coercive measures imposed on both countries.

Mekdad expressed the gratitude of the Syrian people, government and leadership to Iran for the important role it played in the economic, military and political fields to support Syria in its war on terrorism.

He affirmed the Syrian-Iranian deep strategic relations, hailing the high level of cooperation between the two sides in different domains.

Mekdad said that mutual visits help in strengthening relations between the two countries, in activating coordination and consultation between the two ministries of foreign affairs and in finding ways to enhance this cooperation, as required by the current stages.

The Syrian top diplomat reaffirmed Syria’s support for Iran in the negotiations currently held in Vienna on the Iranian nuclear deal.

On his part, Najafi said that his visit to Syria aims at holding talks with Syrian officials to bolster cooperation and coordination with the Syrian Foreign Ministry.

The relations between Syria and Iran are deep and important and they meet the aspirations of the peoples of the two countries, Najafi stressed, noting Iran’s firm support for Syria’s just stances, particularly as regards to combating terrorism to restore security and stability to the entire Syrian territory.

Earlier, Deputy Minister of Foreign Affairs and Expatriates Bashar al-Jaafari met with Najafi and discussed with him the need for cooperation and coordination on all issues of common concern at international forums in the light of the continuous attempts by the United States and some western countries to interfere in the internal affairs of Syria and Iran.

Water rights for the two countries

In a relevant event, Iraqi Minister of Water Resources, Mehdi Rashid al-Hamdani, affirmed on Wednesday the work to boost cooperation between Syria and Iraq in the fields of water and water energies and to unify stances to obtain the water rights of the two countries.

“The visit comes to complete the discussions and work to enhance cooperation between the two countries in the field of water,” Minister Hamdani said in a statement to SANA upon his arrival at the Damascus international airport on a visit to Syria.

For his part, Minister of Water Resources, Tammam Ra’ad, stressed the importance of cooperation between Syria and neighboring countries in the water sector and to share the damage affected by climate change and its direct effects on the region.

Post Views: 154
Previous Why Have Iran’s Militias Stepped Up Attacks Against U.S. Forces in Syria?
Next Russia Halves Salaries of Daraa Fighters, Amid International Calls to End Siege