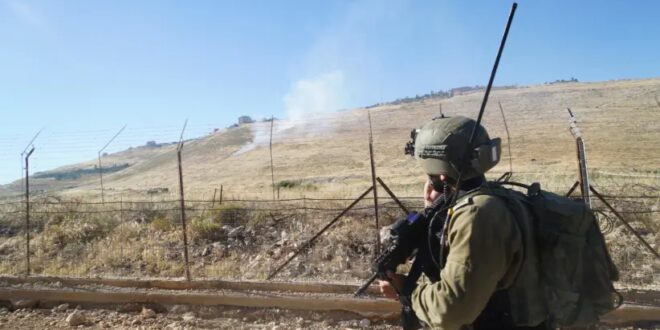 IDF arrests two suspects who infiltrated into Israel from Lebanon

Residents near border initially told to remain indoors. Soldiers have blocked some roads in effort to nab infiltrators.

IDF soldiers arrested two suspects in northern Israel Thursday morning after they were spotted crossing the border from Lebanon into Israel overnight, the military said in a statement. The two were reportedly migrant workers and were questioned at the site where they were arrested.

During about five hours of searches, IDF soldiers isolated the area where the suspects crossed until the suspects were caught. Residents of nearby towns were at first instructed to remain in their homes, but were then told that they could leave even though searches were ongoing.

“The ease with which a fence is passed in such a sensitive place must lead to immediate treatment that includes the completion of the construction of the wall and the fence that has not yet been completed,” said Likud MK Ofir Sofer on Twitter in response to the incident.

In June, two suspects believed to be job-seekers from Lebanon managed to hide from IDF soldiers for over 12 hours after they infiltrated through the border fence. The two were arrested near the border in an overgrown area where they were hiding. The infiltration in June was not suspected to be terror-related.

The infiltration on Thursday came just two days after rockets were fired from Lebanon into northern Israel, setting off sirens throughout the area. One of the rockets was intercepted by Iron Dome.

In response to the rocket fire, the IDF fired tank shells toward Hamoul Valley from where the rockets had been fired on Tuesday morning.

IDF Chief of Staff Lt.-Gen. Aviv Kohavi warned after the rocket fire that Israel “will respond in an overt or covert way, or both together, to all violations of our sovereignty from Lebanon – whoever it is.”

In May, during Operation Guardian of the Walls, a dozen rockets were fired into Israel from the same area in Lebanon. The IDF responded with artillery fire after those rocket attacks as well.

As Lebanon continues to suffer from a worsening economic crisis, the IDF has expressed concerns there may be an increase of drug smuggling and infiltrations of migrant workers or refugees along the northern border.