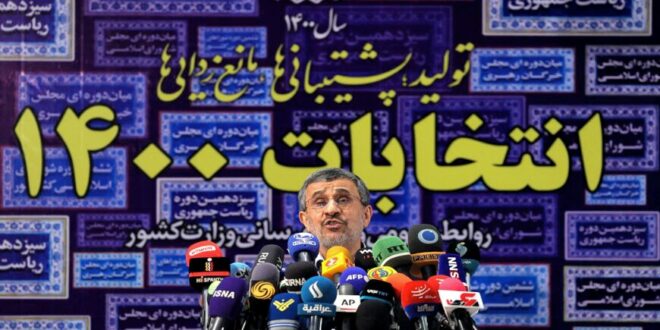 The serious allegation marked a new episode in the ex-president’s confrontations with the Revolutionary Guards and its powerful intelligence branch.

“They have to brace for trials,” Ahmadinejad, who served as head of state from 2005-2013, warned the group, without naming its members. But the former president left more than enough signs in his video message that “the ring” in question was within the Intelligence Organization of the Islamic Revolutionary Guard Corps (IRGC). In recent months, the once conservative politician favored by the ruling elite, who is now seen as a dissident, has not shied away from revealing his frictions with the intelligence agency as well as the entire hard-line ruling establishment.

Ahmadinejad stated that the group was “committing treason by carrying out espionage” for enemies. Only in April, after Iran’s key Natanz nuclear site came under an Israel-blamed attack, Ahmadinejad told a cheering crowd of supporters in the southern city of Bandar Abbas of how “the enemy’s agents have infiltrated” the intelligence apparatus. In his fiery speech, he noted that Iran’s intelligence has been fixating on its own ordinary people by cracking down on their popular protests.

Picking up on the same line in his new speech, Ahmadinejad once again pointed the finger of blame toward the same group for suppressing the “legitimate demands” of the ongoing demonstrations in Khuzestan province. The rallies by the Arab-majority region over a worsening water crisis have now entered their eighth consecutive day. Activists say at least five people have been killed while IRGC-linked media blame Arab separatist groups for the killings and accuse “foreign enemies” of exploiting the demonstrations.

“As soon as people are out on the streets to have their voices heard, they have to face the same corrupt intelligence ring … who links them to foreigners and treats them with brutality,” Ahmadinejad said as a message of solidarity with Khuzestan protesters.

Ahmadinejad’s own two-term presidency was a period marked by stifling media freedoms and a deterioration of the Iranian economy. His contested reelection in 2009 sparked weeks of angry marches nationwide. The response from security forces and the IRGC, which openly supported him at the time, left scores of protesters dead while thousands had to languish under inhumane conditions in such notorious facilities as Kahrizak.

While he had the unequivocal backing from the IRGC and Supreme Leader Ayatollah Ali Khamenei in his first term, his second term led to more fractious relations with both. Tensions with Khamenei reached boiling points. The supreme leader rejected Ahmadinejad’s pick for vice presidency as well as his decision to sack a Khamenei-favored intelligence minister.

In his latest speech, Ahmadinejad also warned about serious consequences of suppressing people’s will and highlighted “eroding public trust” in the establishment in what seemed to be a reference to the June 18 presidential election, which was marred by the lowest turnout in the Islamic Republic’s history. Ahmadinejad — still a member of the top decision-making Expediency Council — is the only sitting Iranian official who publicly boycotted the one-sided election.