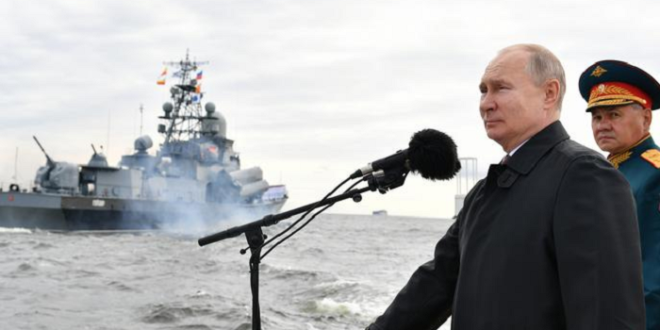 The Russian president’s warning comes amid tensions between London and Moscow after a British warship entered waters close to Crimea.

Russian President Vladimir Putin on Sunday warned that its navy is ready to carry out an “unpreventable strike” on enemy targets if it was in the country’s “national interests.”

Putin was speaking in Saint Petersburg during a parade of warships, just a few weeks after the UK angered Russia by sending a British warship close to the annexed Crimea peninsula.

“The Russian navy today has everything it needs to guarantee the protection of our country and our national interests,” he said.

We are capable of detecting any underwater, above-water, airborne enemy and, if required, carry out an unpreventable strike against it.”

His remarks follow an incident in the Black Sea in June when Russia said it had fired warning shots and dropped bombs in the path of a British warship to chase it out of Crimea waters.

The British government dismissed Russia’s account of the incident.

The country’s Defense Ministry said any shots fired were a pre-announced Russian “gunnery exercise,” and that no bombs had been dropped.

What is the background to the row over Crimea?

Russia annexed Crimea from Ukraine in 2014 but Britain and most of the world recognize the Black Sea peninsula as part of Ukraine, not Russia.

Putin said last month Russia could have sunk the British warship HMS Defender, that it accused of illegally entering its territorial waters, without starting World War Three and said the United States played a role in the “provocation.”

The Russian leader added that Russia had secured its place among the world’s leading naval powers, including by developing “the latest hypersonic precision weapons still unrivaled in the world.”

There are several other major powers that are planning to develop similar technology.

They include the United States, China, and France, who say they will soon catch up.

Russia already has the second-largest arsenal of nuclear weapons in the world and a huge cache of ballistic missiles.

On Monday, the Kremlin said it had carried out another successful test launch of a new Zircon hypersonic cruise missile.

The missile was reportedly launched from an Admiral Gorshkov frigate located in the White Sea in northern Russia on Monday, and hit a land-based target close to the coast on the Barents Sea.

Russia says the Zircon missile will be capable of flying at nine times the speed of sound and have a range of 1,000 kilometers (621 miles).