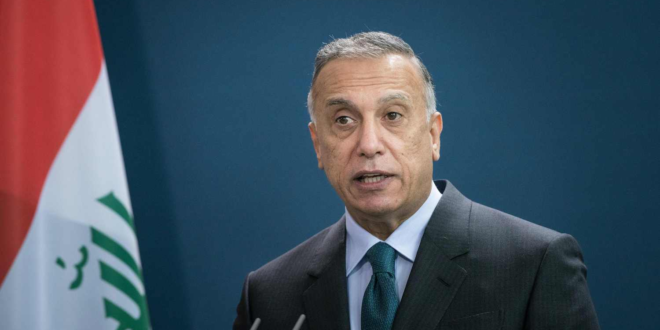 Iraqi Prime Minister Prime Minister Mustafa al-Kadhimi and U.S. President Joe Biden are expected to announce the full withdrawal of U.S. combat troops from Iraq by the end of this year. The announcement is set to be made as Biden hosts Kadhimi at the White House today.

While the U.S. withdrawal from Afghanistan has become a fraught topic in Washington, the Iraq withdrawal is unlikely to cause the same headaches—not least because the announcement is unlikely in practice to remove many of the 2,500 U.S. troops currently stationed there. As the New York Times reports, the withdrawal will mostly take place on paper, with many U.S. service members reclassified as serving in an advisory or training capacity.

As Mina Al-Oraibi writes in Foreign Policy, Kadhimi’s visit comes as he is caught between both Washington and Tehran—and on the verge of losing balance.

The troop announcement may allow some breathing room for Kadhimi ahead of national elections in October. Only in power since last May, Kadhimi seeks to placate a large pro-Iran element in parliament, many of whom opposed his appointment following the deaths of Iraqi militia leader Abu Mahdi al-Muhandis and Iranian General Qassem Suleimani in a January 2020 U.S. airstrike at Baghdad’s international airport. Iraq’s parliament swiftly voted to expel U.S. troops following the assassinations.

Like many governments still dealing with the worst of the COVID-19 pandemic, Iraqi leaders have had to ride waves of public indignation as the death toll mounts and tragedy strikes. Earlier in July, Kadhimi suspended a number of officials following a lethal hospital fire in a coronavirus ward that killed at least 86 people. It followed a similar coronavirus ward fire in a Baghdad hospital in April which killed 82 people.

Still targets. Biden will be aware that the change in U.S. troop designation is unlikely to halt the barrage of rocket and drone attacks—attributed to Iran-backed militias—that have plagued U.S. personnel. Targets have ranged from clandestine CIA warehouses to private U.S. contractors, making any official U.S. withdrawal unlikely to limit the many options available to U.S. adversaries.

Lebanon on the horizon. Kadhimi’s visit comes soon after the White House hosted another Arab leader, Jordan’s King Abdullah II. Speaking to CNN Sunday, the king lauded his “family friendship” with the U.S. president, and mentioned that his discussions with Biden included the latest country facing a crisis in the region: Lebanon. “When the bottom does fall out—and it will happen in weeks—what can we do as the international community to step in?” the king asked.

Writing from Beirut, Foreign Policy columnist Anchal Vora explores the options in a country where hope seems to be lost, and as President Michel Aoun considers who to nominate as Lebanon’s next prime minister.