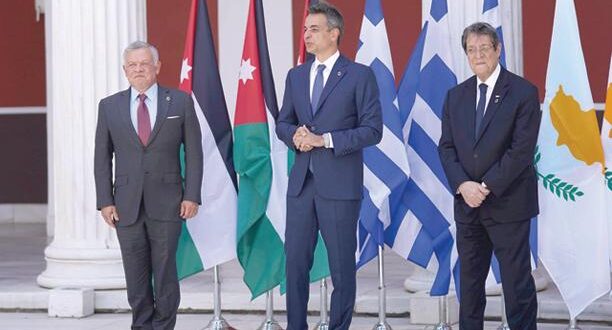 The summit, convening for the third time, focused on the importance of the deep-rooted ties and partnership between the three countries, leading to expanding cooperation prospects across all sectors, and contributing to achieving peace and enhancing security and stability in the region and beyond, according to a Royal Court statement.

In addition, the summit covered Jordan’s relations with the European Union, the refugees and migration crises, as well as efforts to reach political solutions to regional crises.

At the beginning of the summit, His Majesty expressed appreciation of the warm welcome at Athens, and congratulated Prime Minister Mitsotakis on the 200th anniversary of his country’s independence.

The King noted the importance of the trilateral summit as an expanding partnership since the first summit in 2018, which is an opportunity to maintain friendly relations, enhance cooperation and follow up on the two previous summits.

“COVID was a challenge that really reminded us how interconnected our nations are, and of the importance to enhance the cooperation,” His Majesty said.

“We look forward to seeing how we as three countries could tap into many opportunities, whether it is trade, security, tourism, energy, agriculture, water, the environment, healthcare, investment and ICT, as well as what I really think has a relationship between our three countries, in culture and education,” the King added.

The King stressed the importance of capitalising on the special partnership with Iraq and Egypt, noting that Jordan recently held the fourth trilateral summit with these two countries.

“I hope that these meetings today will allow us to also discuss those two countries as part of the greater regional integration,” His Majesty said.

On the Palestinian issue and the latest escalation, His Majesty said: “We can discuss the role that we can all play in trying to bring peoples together and to relaunch peace negotiations.”

The King pointed to discussions with the Cypriot and Greek governments on Jordan’s role in safeguarding Islamic holy sites in Jerusalem and the role of Christianity in Jerusalem and in the West Bank.

For his part, Greek Prime Minister Kyriakos Mitsotakis welcomed His Majesty and the Cypriot president, noting the importance of this year to Greece and Jordan, as Greece celebrates the 200th anniversary of its War of Independence, and Jordan celebrates its centennial.

Prime Minister Mitsotakis noted the progress all three countries made within the trilateral framework, stressing the importance of promoting this partnership in economy and security, especially in light of the ramifications of the COVID-19 pandemic on various sectors.

The Greek prime minister highlighted the summit’s agenda, which includes means to bolster Jordan’s partnership with the European Union, in addition to the latest regional and Euro-Mediterranean developments, noting the summit’s role in enhancing stability and security, and achieving peace in the region.

Cypriot President Anastasiades commended the convening of the third trilateral summit, saying it reflects keenness on enhancing the partnership between the three countries, especially in culture, trade and digital transformation.

President Anastasiades said the summit is covering the recent developments in the Middle East and the situation in Iraq, Libya, Syria and Cyprus, emphasising the importance of cooperation among the three countries in enhancing security and stability in the Eastern Mediterranean region, and continuing efforts to combat terrorism and extremism within the Aqaba Process initiative, launched by His Majesty.

He also stressed Cyprus’ and Greece’s interest in strengthening the European Union’s partnership with Jordan within the Kingdom’s priority sectors, and thanked the King for Jordan’s balanced position on the Cyprus issue.

The King returned to Jordan later on Wednesday.