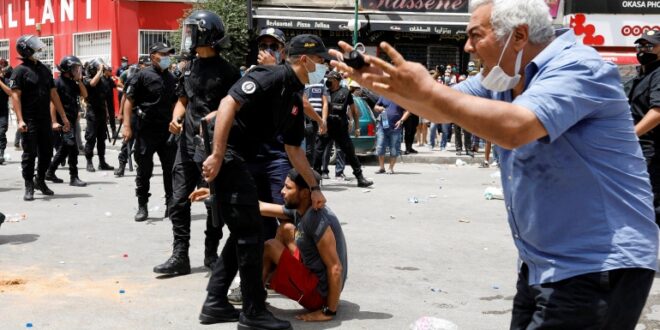 What we know so far about Tunisia’s political crisis

Often celebrated as the Arab Spring’s so-called success model, Tunisia is facing its biggest political crisis since the 2011 revolution that introduced democracy.

On Sunday, President Kais Saied removed Prime Minister Hichem Mechichi, who was also in charge of the interior ministry, and suspended Parliament.

He also suspended the immunity of members of parliament, insisting his actions were in line with the constitution.

In his speech, Saied said he would assume executive authority with the assistance of a new prime minister.

The announcement was condemned as an attack on democracy by his rivals but was greeted by others with celebrations on the streets across the country.

Parliament speaker Rached Ghannouchi, who heads Parliament’s biggest party, Ennahdha, accused Saied of launching “a coup against the revolution and constitution”.
How long will Parliament be suspended?

The presidency said the parliament would be suspended for 30 days, though Saied told reporters the 30-day period can be extended if needed “until the situation settles down”.

Saied based his decisions on Article 80 in the constitution, which allows the president to take extraordinary measures if there is “imminent danger threatening the nation”.

However, it also states that Parliament is to be deemed in a state of continuous session.

Who else has been removed?

They will not act as caretaker ministers, as Saied ordered lower-ranking administrative and finance officials at each ministry to carry out any needed tasks until a new prime minister and cabinet are appointed.

Saied assigned Khaled Yahyaoui, director-general of the presidential security unit, to supervise the ministry of the interior, two security sources said on Monday.
Why now?

Protesters demanded the government’s removal after a spike in COVID-19 cases that aggravated economic troubles. Offices of the Ennahdha party were also attacked.

Throwing stones and shouting slogans, the protesters demanded the resignation of Prime Minister Hichem Mechichi and the dissolution of Parliament.

Witnesses said protesters stormed or tried to storm Ennahdha offices in Monastir, Sfax, El Kef and Sousse, while in Touzeur they set fire to the party’s local headquarters.

The growing political schisms and Tunisia’s weary economy are in line with an ongoing struggle for dominance in Tunisia’s parliament.

Saied says he is trying to avert a looming fiscal crisis amid a weeks-long spike in COVID cases and increased death rates.

Earlier this month, Tunisia’s health ministry said the country’ healthcare system had “collapsed” under the weight of the pandemic, which has caused more than 17,000 deaths in a population of about 12 million.
A decade of challenges

Saied and the parliament were elected in separate popular votes in 2019, while Mechichi took office last year, replacing another short-lived government.

But it is not the first time a government has been short-lived in Tunisia since the 2011 revolution that led to the overthrow of longtime President Zine El Abidine Ben Ali.

After months of failed attempts to form a government, Elyes Fakhfakh became PM in January 2020 but was forced out within months over a corruption scandal.

Months later, Mechichi was named prime minister but has been enmeshed in political disputes with Saied for more than a year. His fragile government lurched from crisis to crisis as it struggled to deal with the pandemic and the need for urgent reforms.

Over the past decade, the country has faced a series of challenges, including recurring attacks by ISIL (ISIS) that devastated the country’s vital tourism sector and were a major contributor to the economic decline, which approached a crisis point in 2017.