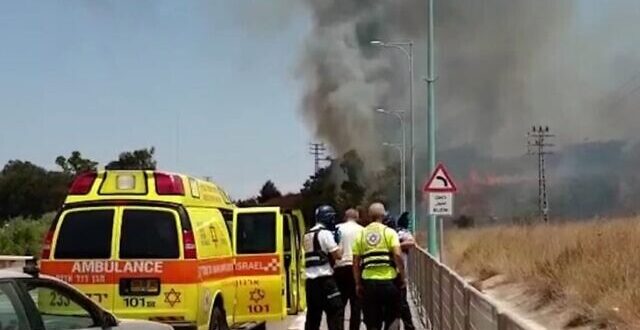 Three rockets were fired into northern Israel from Lebanon Wednesday shortly after noon, causing warning sirens to sound in the Kiryat Shmona area. Two rockets hit open areas, while the third fell short of the border.

There were no reports of casualties in the attack, though the Magen David Adom emergency medical service treated four people for anxiety attacks.

In response, the Israel Defense Forces fired artillery shells at targets in Lebanon just after the attack. Some two hours later it followed up with a second and a third round.

Israel conveyed to Lebanon via UN peacekeepers that it could intensify its response if calm were not returned to the border.

Defense Minister Benny Gantz said in a statement that he had sent a “strong message to UNIFIL over the rocket fire from Lebanon.”

According to Hebrew media reports, Israel believes local armed Palestinian groups and not the Hezbollah terror organization had fired the rockets.

The alarms sounded shortly after 12 p.m. in Kiryat Shmona, Kfar Giladi, and Tel Hai, near Israel’s northern border with Lebanon. The IDF said it identified three launches from Lebanon. One failed and fell inside Lebanese territory, while two others hit open areas inside Israel.

The surprise sirens sent residents scrambling to shelters in the frontier town. Explosions were heard in the area and videos showed smoke rising from an impact site. One of the rockets caused a large fire in a field near Kiryat Shmona.

The local municipality said it had opened shelters in the city but that residents could continue with their daily routines. The military said there was no immediate change in instructions for residents of towns near the border.

When the sirens began to sound, Avichai Danino was in the cemetery in Kiryat Shmona to visit his father’s grave on his birthday.

“We kissed the grave and lay down on the floor,” he told the Ynet news site. “The rocket fell near the cemetery and close to our car — I don’t know how it wasn’t destroyed.”

Local resident Yair Elgrably told Kan news that he did not have much warning as one of the rockets landed close to him just as the sirens began to wail.

“I was just carrying on with my day when suddenly there was a siren and an impact, both at the same time,” he said. “Yesterday there were all kinds of explosions at night and now a rocket fell 200 meters from us.”

During May’s 11-day war in Gaza, as well as last month, a number of rockets were launched from Lebanon into northern Israel. The military assessed at the time the rockets, too, had been launched by a local Palestinian group, not by Hezbollah.