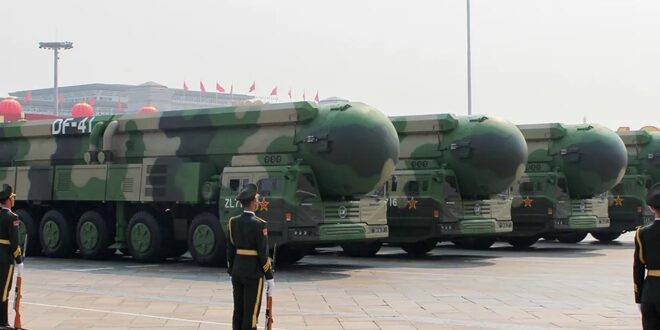 Recent discoveries of missile silo construction in China in 2021 have turned the international spotlight on Beijing’s nuclear ambitions. The findings (three so far) are all drawn from open-source commercial satellite imagery. They include 16 silos in Jilantai in Inner Mongolia reported by Hans Kristensen in February; followed by 120 silos in the north-western city of Yumen, identified by Jeffrey Lewis and Decker Eveleth in June; and a third site in Hami (near Yumen), earlier in development but with the potential to house 110 silos, spotted by Matt Korda and Hans Kristensen in late July. In response, Beijing has been unsurprisingly silent while the Chinese media have come out in defence. Meanwhile, the Western nuclear weapons community has been abuzz as it tries to decipher what these discoveries mean: why build so many silos, so quickly? Does it represent a definitive break away from a relatively restrained nuclear arsenal? Is arms control between China, the US and Russia now even more unlikely?

Let us deal with the time/scale question first. Most analysts have expressed shock at the rapid pace and massive scale of construction. Before 2021, it was understood that China had around 16 silos, mostly for old DF-5 missiles. According to Kristensen, building silos in Jilantai has been on the cards for around five years. Moreover, Jilantai, the site discovered in February, was likely a test-ground for construction elsewhere. But the shock over scale remains. Viewed in their totality, China might eventually have around 250 missile silos – more than Russia’s 100 but still less than the US’s 400. The easy lesson here is not to underestimate China. Still, a more important lesson can be drawn: outside the nuclear domain, with global projects like the Belt and Road, China has quickly become an infrastructure powerhouse. Building so many silos so quickly is perhaps not quite as big a feat.

Answers to the other questions are a bit more complicated. The authors of these discoveries share an open mind as to what the silos might mean for China’s nuclear posture. They point out, reasonably, that decision-makers in Beijing may or may not fill all the silos with missiles like the DF-41. Unless there are images of missiles being placed in the silos (and even then, the missiles might be dummies), one cannot tell. A popular, and persuasive, view though is that many silos will be empty, acting as decoys. If many remain empty, China might be tactically playing a ‘shell game’, considered but discarded by the US in the 1970s. Yet, China does not need to copy foreign strategies to increase the survivability of its strategic assets. China already has its own traditions of using decoys and countermeasures to circumvent the enemy, including the practice of hiding strategic assets in inaccessible and remote areas. For example, in the 1990s China built a massive underground network of tunnels inside mountains to safeguard its nuclear missiles, including constructing multiple dummy entry/exit sites to frustrate the enemy. Outside the nuclear context, in the 1960s, China employed the ‘Third Line/Front’, relocating massive strategic industries inland to increase their survivability against Soviet attack. The idea and practice of a ‘shell game’ is therefore not new to China.

But what if China intends to fill all the silos with missiles, not now, but within a decade or so? What would it mean for China’s No First Use (NFU) pledge? The filled silos might increase the number of survivable missiles for a retaliatory strike, ironically bolstering China’s confidence in maintaining NFU. Yet Matthew Kroenig questions why China has focused on building silos for missiles like the DF-41 that can be used more quickly in a crisis than the mobile DF-31 or DF-31A. Two potential changes to nuclear posture come to mind. At the softer end of the spectrum, China might be seeking a Launch on Warning (LOW) capability that it did not have before. LOW comes at a high price: shortening nuclear decision-making time and increasing the likelihood of accidents. At the harder end of the spectrum, one needs to consider whether the silos indicate an emerging first-strike capability, or at least the ambition of one in Beijing. Neither change would be good. Whatever the strategic purpose of the silos, one thing is certain: China is not confident in its nuclear arsenal.

Whichever way one views China’s massive silo construction this year, it spells trouble. But, on the bright side, we should be comforted by the massive dividends of pursuing open-source intelligence on nuclear matters. The discoveries this year build on path-breaking use of satellite imagery and 3D imaging by experts like Melissa Hanham and Tamara Patton in the wider nuclear field. The bigger lesson here is perhaps this: we should not rely on the many US and few Chinese official accounts of each other to inform the nuclear debate. Open sources (and excellent researchers) do a pretty good job already.