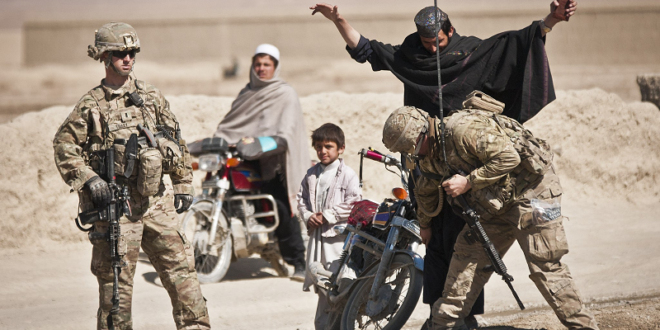 Unlike primacists, this ‘coalition’ actually embraces an internationalism that respects the rule of law, and diplomacy.

In their recent journal article, political scientists John Ikenberry and Daniel Deudney laid out a critique of what they call the “Quincy Coalition” — a loose alliance of libertarians, neo-realists, and the progressive left.

A centerpiece of their assessment was that the coalition is “united in opposing the project of American liberal internationalism, manifest in a system of rules, institutions and partnerships that the United States has built and led over the last 70 years.” The “Quincy Coalition,” in their eyes, is “profoundly deficient” in its understanding of the liberal-internationalist projects that contributed to American success in the twentieth century. However, the reality is that this couldn’t be further from the truth.

Much of this “coalition” sees international engagement and restraint as, well, perfectly compatible. Rather than closing its eyes and wearing noise-cancelling headphones, the coalition envisions an America that engages with the world by working with other nations through diplomacy. Diplomacy, not military engagement, is conducive to respecting established international law and norms.

In his book “Republic in Peril,” Professor Emeritus of Colorado College David Hendrickson argues that “the restrictions on the use of force inherent in the UN Charter, once closely identified with liberalism, fit today’s realist prescriptions as the hand fits on the glove.” It’s mainly for this one simple reason that this “odd coalition” makes natural allies of international law; international law is against intervention.

The problem “Quincy Coalition” has is not with international law, but that the United States is inconsistent in upholding it. University of Birmingham professor Patrick Porter calls this the “selective liberal order.” If America itself frequently disrespects international law, it becomes meaningless when imploring others to uphold it. The CATO Institute’s John Glaser writes that “saving the liberal order means adhering to the UN Charter’s prohibition on the use of force except in self-defense or unless authorized by the Security Council.” Thus, unauthorized intervention isn’t just bad because it’s not in the national interest, but also because it violates international principles. Oftentimes, the two coincide.

The post-9/11 wars demonstrate this dynamic. The Iraq War was largely executed unilaterally with little regard for international principles; by 2004, then Secretary-General of the United Nations Kofi Annan even said outright that the war was illegal and breached the UN Charter. Though the war in Afghanistan did have the support of the U.N. Security Council in the form of Resolution 1368 and 1373, the NATO invasion was arguably illegal because the U.N. resolutions “did not expressly permit an aggressive approach in tackling international terrorism.” Article 2(3) and Article 2(4) of the U.N. Charter were disregarded, since peaceful means to resolve the issue were not sufficiently considered. Similarly, the intervention in Libya exceeded the U.N. Security Council mandate.

The Quincy coalition as Ikenberry and Deudney describe it, has called for ending these wars, in part on the basis of international law. Carnegie Fellow (and Quincy Institute co-founder) Stephen Wertheim and Yale Professor Samuel Moyn call the illegality of the Iraq War “flagrant and catalytic” since it was unauthorized by the United Nations. Meanwhile, a Quincy Institute special report labelled the morphing U.S. objectives in Afghanistan as “two decades of mission creep” which had moved away from the initial limited goal of targeting al–Qaeda’s operational capabilities. Instead, the report calls for respecting international laws and norms. In this light, Biden’s rightful decision to follow through with the Afghanistan withdrawal marks a return to adherence to international law much in line with the vision of this so-called “Quincy Coalition.”

Despite this, Ikenberry and Deudney claim that the coalition’s agenda points to a Trumpian rejection of internationalism: “Like them [the Quincy Coalition], he rejected international institutions, withdrawing from numerous arms-control accords and free-trade agreements and even pulling out of the World Health Organization in the middle of a global pandemic.” Members of the Quincy coalition that the authors call out by name have written at length against many of these policies. In an article titled “Biden Wins, Then What?” Quincy Institute president Andrew Bacevich pushed for Biden to rejoin the Paris Climate Accords as part of a $2 trillion Green New Deal. Wertheim’s book “Tomorrow the World” explains “how the project of liberal internationalism was originally, and could be again, detached from U.S. global military dominance.” Various columns have been written on these pages excoriating the Trump administration for letting bilateral treaties, including New START, die on the vine. The Quincy Coalition rejects the Trumpian vision precisely because of its repudiation of international cooperation rather than despite it.

In characterizing the restraint movement, that a leap is made from abhorring war and unauthorized intervention to rejecting all international engagement is endemic to the military-first approach that has dominated Washington in the post 9/11 era. Wertheim and Moyn argue that following the Gulf War, which was legal under international law, the U.S. became “enthralled by its exorbitant primacy in world affairs,” turning its back on the “restrictive” international prohibitions of war. The Congressional Research Service found that a staggering 80 percent of all of the country’s adventures abroad took place after 1989. Now is the time to shift back, realigning powers and interests while respecting international laws and norms.

David Hendrickson describes this much-needed return to problem-solving with other nations while still retrenching in military posture as “a new internationalism.” International cooperation is essential for tackling some of the biggest issues facing U.S. foreign policy. The Joint Comprehensive Plan of Action, which limited the levels of enriched uranium and sent live data and measurements of Iran’s nuclear program to the International Atomic Energy Agency, wouldn’t be possible without respect for international diplomacy and norms. Neither would New START, which New American Engagement Initiative Fellow Emma Ashford argues should act as a framework to broach more challenging arms-control issues with Russia. There is, of course, necessity in debating what shape it should take, but the relative success, cost, and efficiency of these examples prove the vitality of international engagement.

Any approach to how the U.S. engages internationally must include institutional changes at home. Quincy Institute Fellow Gordon Adams has proposed several ways in which the State Department should be modernized for diplomacy to become Washington’s tool of first resort, including the creation of a strategic planning office. “Lacking a strategic planning process,” he writes, “the State Department has ceded ground for planning and oversight of this important foreign policy area and many of these programs to DoD, whose role and authority has expanded, further adding to the militarization of U.S. global engagement.” There’s no better illustration of the current lack of strategic imagination than the State Department playing second fiddle to the Pentagon in strategy and policy, often resulting in militarizing U.S. foreign policy.

Few in the three-pronged trident of realists, libertarians, and the progressive left that make up the “Quincy Coalition” advocate for a complete withdrawal from the world, at least not in the sense that Ikenberry and Deudney believe. In contrast to the strawman “run-and-hide” depiction of the restraint movement, the Quincy Coalition largely embraces some form of new internationalism. International engagement is, and should be, a cornerstone of U.S. foreign policy.

Post Views: 76
Previous The US war against ISIS in Syria and Iraq is 7-years-old today
Next Fire breaks out in Iranian petrochemical factory – report