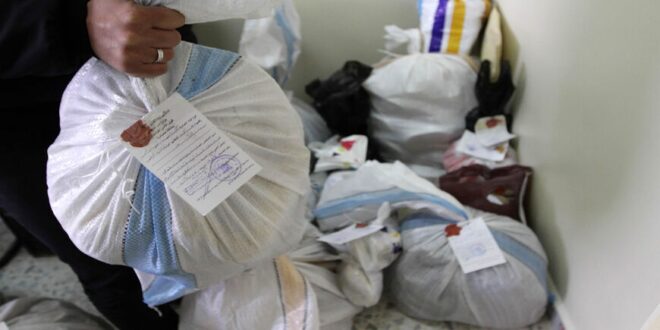 Drug use surges in opposition-controlled areas in northwest Syria

Security forces in the countryside of Aleppo are combating the spread of narcotic substances, amid growing demands for cooperation by the Turkish-backed Free Syrian Army factions.

The use of narcotics is surging across the areas controlled by the armed Turkish-backed Syrian opposition in northwestern Syria.

All efforts exerted by the Turkish-backed Free Syrian Army (FSA) factions in the countryside of Aleppo to stop drug trafficking and abuse so far have proved insufficient.

In addition, some FSA factions are facilitating the movement of narcotics to reap profits, and people affiliated with the opposition are involved in drug trafficking and distribution.

On Aug. 1, the military police of the FSA-affiliated Syrian National Army (SNA) seized 100,000 narcotic pills in the city of al-Bab in the northeastern countryside of Aleppo, in a security operation targeting a drug-trafficking gang. The military police arrested two gang members.

The commander of the military police in al-Bab, Abdul Latif al-Ahmad, told Al-Monitor, “The military police is making great efforts to curb the spread of drugs in the city of al-Bab, in cooperation with the Anti-Narcotics Division affiliated with the police forces and Public Security Forces. The main types of drugs that are distributed among youth are Captagon pills, amphetamine and hashish.”

He said, “The security operation in al-Bab took place after careful surveillance and monitoring and based on information we obtained during investigation with former detainees who were imprisoned on drug-trafficking charges. Drug-trafficking gangs operate as interconnected networks and they all know each other.”

Ahmad pointed out that the narcotic pills and hashish are brought to al-Bab from the Syrian government-held areas north of Aleppo. He noted that according to the information obtained from gang members arrested during security operations, narcotics are moved via smuggling channels spread on the confrontation lines with the government forces.

He added, “The smuggling channels are the biggest obstacle to combating the spread of narcotics. This seems to be a difficult task at the present time since drugs keep luring in a wide spectrum of youth amid dire poverty and lack of job opportunities. Drug trafficking generates huge profits and there is high demand for narcotic pills, especially among the youth.”

The head of the Anti-Narcotics Division in al-Bab, 1st Lt. Mohammad Enad, told Al-Monitor, “The most recent security operation carried out by the division’s operatives against drug-trafficking gangs in al-Bab took place Aug. 5; six people were arrested. The operatives confiscated thousands of Captagon pills and large quantities of amphetamine and hashish, individual weapons and motorbikes used by the gang members to distribute and sell narcotics.”

He noted that in the past two years the division has carried out more than 150 security operations against drug dealers and distributors in al-Bab and the surrounding farms. “The division arrested dozens of drug dealers and users. Large quantities of narcotics were confiscated and destroyed,” he added.

Enad pointed to a number of difficulties impeding the efforts to curb the spread of drug trafficking in al-Bab and the opposition areas in the countryside of Aleppo. “We face dangers and risks while pursuing these gangs because they have firearms. Any clash with them will cause human losses in the ranks of the police forces. It is also difficult to prosecute some of those involved in the narcotics trade as they are affiliated with some FSA factions. They use military cards while on the move, and we find it very difficult to arrest them.”

Praising the cooperation shown from some factions, Enad argued, however, that it is not enough. “We hope for more cooperation and facilitations to be able to chase and arrest the members of these factions who exploit their military position in promoting and distributing drugs,” he said. “There must be efficient coordination between the military and the police forces so that we can rid society of this devastating phenomenon.”

Enad added, “We are also prosecuting drug users. Suspects are forced to undergo a drug test and if it is positive they get referred to the courts to get a deterrent punishment. The sentence for drug use ranges between five to 10 years in prison.”

On July 27, the SNA arrested a gang promoting narcotics in the Afrin area in the northern countryside of Aleppo. The opposition-affiliated Zaman al-Wasl news website reported that security forces launched a series of raids and arrests in Sheikh Hadid district in the northern Afrin region of Aleppo. They arrested Samo Ammar, nicknamed Abu Rasha — who is believed to be a battalion commander in the Sultan Suleiman Shah Division — over his involvement in the sale and trade of narcotic pills in the region.

The news website said that the security campaign targeted a number of members of the group headed by Abu Rasha, some of whom are military members of his battalion, and others are his relatives. It affirmed that all narcotic substances in their possession were confiscated and destroyed. The leadership of the FSA-affiliated Sultan Suleiman Shah Division issued a decision to confiscate all the properties of Abu Rasha, his sons and relatives.

In March, the General Security Service of Hayat Tahrir al-Sham in the northwestern province of Idlib announced the seizure of narcotic pills on the way to Saudi Arabia. According to a statement published by the General Security, “More than 2 million narcotic pills were seized in Idlib coming from the northern countryside of Aleppo and packed in tens of tons of Pyrene. They were destined for Turkey and then Saudi Arabia.” Pyrene is a substance formed from olive pomace oil and commonly used for heating purposes.

Post Views: 195
Previous Water protests erupt in Kurdistan Region of Iraq
Next Beyond Business as Usual in Israel-Palestine