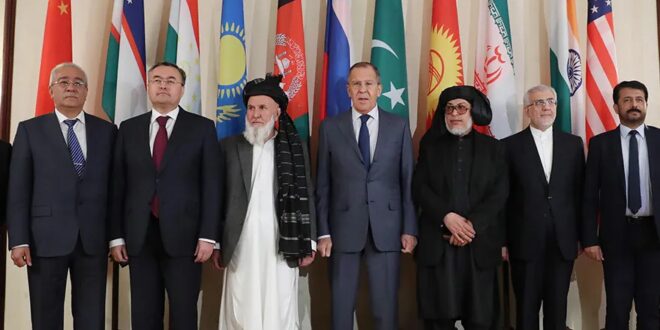 Concerned about the implications of a Taliban victory for regional security, Moscow is searching for a diplomatic solution to Afghanistan’s conflict.

As the security situation inside Afghanistan deteriorates by the day, Moscow fears that a Taliban victory could see Afghanistan exporting terrorism, strife, drugs and insecurity to Russia’s historical Central Asian backyard. Moscow’s new strategic worries contrast with its earlier position, which was to be suspicious of Washington’s attempts to build US clout in the heart of Asia and to use Afghanistan as a staging ground for operations against Russia, rather than focusing on the domestic politics of Afghanistan itself.

As US President Joe Biden called on regional powers to present a viable peace plan for Afghanistan, both Russia and China engaged in a flurry of diplomatic activity with Central Asian countries in early July and blamed the US’s hasty withdrawal for triggering instability in and around the country. Since early July, Russian Foreign Minister Sergey Lavrov has warned that terrorism in Afghanistan will increase. Russian authorities have also not hidden their fears that an unstable Afghanistan could attract militants from the Islamic State – banned in Russia as a terrorist organisation – to northern Afghan provinces bordering Moscow’s Central Asian allies.
Russia’s Complex Attitude to the Taliban

In 2001, Russia supported the US overthrow of the Taliban regime and designated the Taliban as a terrorist group, not only as an act of international solidarity, but also because the Taliban government provided Russia’s Chechen rebels with cash and arms. The Taliban regime even recognised Chechnya as an independent state in 2000.

However, aware that the Taliban will play a crucial role in determining Afghanistan’s political future, Russia has for more than a decade built up diplomatic and military contacts with the movement, treating it as a party to any peacemaking process. Moscow has stated that the Taliban are part of the intra-Afghan dialogue, and that Russia is implementing the UN Security Council resolution of March 2020 by ‘holding contacts’ with the Taliban. This resolution followed the signing of the Doha agreement between the US and the Taliban in February 2020, which ultimately came to nothing, but provided Russia with the opening for its own dealings with the Taliban.

Russia has also cultivated different political factions in Afghanistan. Officially, Moscow wants all political, ethnic and other groups to take part in talks for a political settlement and opposes a Taliban monopoly of power. For the moment, Russia, like its main strategic partner, China, stresses the intertwining of Afghan security and development within the framework of the Shanghai Cooperation Organisation (SCO), which the two countries co-founded in 2001. Afghanistan has observer status in the SCO, and the eight full members include all the Central Asian states, China, India and Pakistan. Russia is thus a major, but cautious, actor in Afghanistan’s peace process.
Russia Prioritises Central Asia’s Security

Since the Taliban forced Soviet troops to leave Afghanistan in 1989, Russia has lacked the wherewithal to intervene militarily. However, realising that instability in Afghanistan could adversely affect Central Asia, since the early 2010s Russia has sought to enhance its influence in Afghanistan through diplomacy. Hoping to end the war, Russia has initiated and organised regional meetings with the US, China, Pakistan, Iran and the five Central Asian countries, three of which – Tajikistan, Turkmenistan and Uzbekistan – share frontiers with Afghanistan.

As the Taliban fight to gain more ground, Lavrov has said bluntly that events in Afghanistan ‘concern us exclusively from the point of view of a possible spillover of troubles’ into the territory of Russia’s Central Asian allies.

In fact, Afghanistan’s turmoil has given Russia the opportunity to increase its leverage in Central Asia. The Taliban control most of Afghanistan’s border with Tajikistan, the region’s poorest country, which has already accepted many Afghan refugees and asked Moscow for help. Tajikistan hosts one of Russia’s few foreign bases with more than 6,000 Russian troops, and is a member of the Russia-led Collective Security Treaty Organisation (CSTO), a weaker, looser alliance than the Warsaw Pact during the Cold War. Russia has moved troops to the Afghan-Tajik frontier and declared that the CSTO is ‘ready to engage its entire military capability to provide assistance to Tajikistan’ if the situation worsens in Afghanistan. Over the next few months, Russia and the Central Asian countries will hold a series of drills on the Afghan border, with a view to keeping their armed forces on alert to repel any extremist incursions from Afghanistan.

Meanwhile, the Central Asian countries, perhaps at Moscow’s bidding, have rejected Washington’s requests to allow some US troops leaving Afghanistan to be stationed in their territories. In any case, given their need for military help, they probably concur with Russia that if 100,000 US-led NATO troops failed to stabilise Afghanistan, they would not be able to achieve much with a smaller presence outside the country.

At another level, political imperatives have changed Russia’s attitude to Pakistan, which has provided support to the Taliban. During the Cold War, Moscow saw Pakistan as a destabilising fomenter of extremism in South and Central Asia. But with the US’s retreat discernible on the political horizon since 2014, Russia has wooed Pakistan with everything from arms and COVID-19 vaccines to investment in a gas pipeline extending from Karachi to Lahore, in the hope that Islamabad will use its influence over the Taliban to facilitate a peace agreement in Afghanistan.
Outlook

Russia’s diplomacy and international standing are being tested in Afghanistan’s domestic political arena as it searches for a viable all-party peace accord, which would be the best bet against instability in Central Asia. A durable peace would also advance Afghanistan’s economic progress. The willingness and ability of any government in Afghanistan to fight global terrorism will determine Moscow’s ties with it, as Russia prioritises regional security.