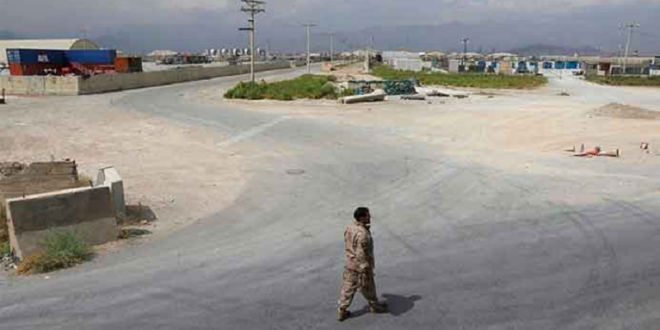 US troops return to Afghanistan as regime disintegrates

The first of some 3,000 US soldiers and Marines ordered by the Biden administration back into Afghanistan began arriving at Kabul’s international airport Friday as six more of Afghanistan’s provincial capitals were overrun by the Taliban, bringing the total to 18 that have fallen to the insurgency.

Another 4,000 US troops are being sent to Kuwait for a possible rapid deployment to Afghanistan. Meanwhile, Britain is dispatching 600 of its own soldiers.

The ostensible purpose of these operations is the evacuation of US and British personnel from Afghanistan, what the Pentagon classified as a “Noncombatant Evacuation Operation” or NOE. How long they will remain deployed in the war-torn country has not been disclosed. Their mission, however, is undoubtedly part of a desperate bid to forestall, at least temporarily, the Taliban’s taking of Kabul.

Certainly, the rescue of US personnel from supposed threats has been invoked before as the pretext for launching wars and regime-change operations, as was the case in Grenada and Panama in the 1980s. And the deployment comes on top of the US launching airstrikes against the Taliban’s advance using B-52 strategic bombers, drones, AC-130 gunships and aircraft carrier-based fighter jets, inflicting heavy casualties among fighters and civilians alike.

US officials, meanwhile, are repeatedly warning the Taliban that any “government imposed by force will be a pariah state.” What hypocrisy! As if the puppet regime in Kabul was not imposed by overwhelming US military force.

Whatever tactics are being advocated by the US military and intelligence apparatus, US imperialism’s reconquest of Afghanistan would require far more than a few thousand troops, and would entail a bloodbath that would eclipse the mass killing of the past 20 years.

Washington is face-to-face with a staggering historic debacle on a scale not seen since the fall of Saigon in 1975 sent the last Americans in Vietnam climbing into helicopters on the US embassy roof. Reports from the US Embassy in Kabul indicate that staff there are shredding documents and destroying computers.

The comparison to Vietnam is being made increasingly within the US ruling establishment. US Senate Republican leader Mitch McConnell declared Thursday, “Biden’s decisions have us hurtling toward an even worse sequel to the humiliating fall of Saigon in 1975.”

There has also been an increasing drumbeat in the media for a renewal of the US intervention. The Washington Post editorialized Friday that “Biden’s precipitous withdrawal, as well as his refusal to offer more meaningful assistance to Afghanistan’s government, risks disaster.”

This followed a column by the Post’s Max Boot, a fanatic for US imperialist war everywhere, insisting that “The only thing that can avert an even greater calamity is a willingness by Biden to rethink his bad decision and send U.S. aircraft and advisers back to Afghanistan to bolster the government forces before Kabul falls.”

Foreign Policy, meanwhile, carried an article stating that, “The U.S. withdrawal from Afghanistan should continue. But a new military engagement should begin.” This can be achieved, it argues, by Washington “simply shifting its narrative about the purpose of military action” from counterinsurgency to a “humanitarian” intervention to protect civilians.

Right-wing Republicans, pro-war Democrats and the corporate media have all joined together to cast the key question posed in Afghanistan as the rights of women, in a country where the vast majority of women are struggling to find enough food to sustain themselves and their children each day.

The prescriptions for yet another military “surge” and the cynical attempts in Washington to launch a “who lost Afghanistan” campaign cannot conceal the scale of the humiliating defeat suffered by US imperialism.

The past weeks have witnessed the unmitigated collapse of Afghan regime security forces that the Pentagon spent 20 years and nearly $90 billion organizing, training and arming, and which were supposed to pursue the decades-old counterinsurgency war after the US withdrawal, which is to formally conclude on August 31.

The security forces have surrendered one city after another without a fight, with Afghan troops either surrendering, stripping off their uniforms and melting into the civilian population or, in some cases, joining the insurgency.

US officials have cast the problem as a lack of “will” on the part of Afghan security forces and their leaders. “They’ve got to fight for themselves, fight for their nation,” Biden declared earlier this week.

What has become abundantly clear is that masses of Afghans, including soldiers and police who have gone unpaid, unfed and unsupplied as politicians and their commanders stole their salaries and supplies, have concluded that the Afghanistan bequeathed to them by the US occupation is not “their nation.”

Twenty years of occupation and the expenditure of well over a trillion dollars have left Afghanistan impoverished, undeveloped and riven by extreme levels of social inequality. At least 70 percent of the population is living on a dollar or less a day, while a few hundred families connected to the government have grown immensely wealthy off of embezzled aid money and lucrative military contracts. Three-quarters of the population is rural, barely surviving from subsistence agriculture. The hatred among these dispossessed masses for the crimes of the US occupation and for the millionaires and US puppets in Kabul provided the Taliban an unending source of young recruits, no matter how many of them were killed by the US military.

The Kabul regime is led by corrupt exile politicians with more than one passport in their pockets, some of them incapable of speaking either Pashto or Dari, the country’s main languages. President Ashraf Ghani and his cohorts owe their positions to rigged elections in which a fraction of the population participated, and the backing of Washington.

Afghanistan, like Vietnam before it, has proven US imperialism incapable of killing its way to victory in a war that claimed at least a quarter of a million victims. Launched under the pretense of a “war on terrorism” after the September 11, 2001, attacks on New York City and Washington, within months the US intervention shifted from a hunt for Al Qaeda, a Frankenstein’s monster created with the aid of the CIA in the 1980s, into a war against the population, in which anyone perceived as a threat to the US occupation was dealt with as a “terrorist,” imprisoned, tortured and summarily executed.

The debacle in Afghanistan signals the failure not just of Washington’s longest war, but of an entire global policy pursued by US imperialism for over three decades.

In the wake of the Moscow Stalinist bureaucracy’s dissolution of the Soviet Union in 1991, the US ruling elite concluded that there was nothing standing in the way of Washington’s use of overwhelming military superiority to assert its domination over strategic regions of the globe: in the first instance Afghanistan, at the center of the Eurasian continent and on the doorstep of the Caspian Basin and its massive energy reserves, and then Iraq, with the world’s fifth-largest oil reserves.

The underlying conception was that through a policy of preemptive war and unrestrained militarism, American capitalism could reverse the long-term decline of its global economic hegemony. Its initial military victories in Afghanistan and Iraq have proven pyrrhic at best. Through the expenditure of trillions of dollars, the sacrifice of the lives of more than 7,000 US troops and the slaughter of over a million Afghans and Iraqis, Washington succeeded in neither country in imposing a regime that could secure its interests.

In 1989, when Soviet forces left Afghanistan after a decade of war that claimed the lives of 15,000 Red Army soldiers, Washington counted it as a victory and later celebrated it as contributing to the collapse of the Soviet Union.

Zbigniew Brzezinski, the fanatically anti-communist national security adviser to President Jimmy Carter, had in 1978 initiated the policy of fomenting an Islamist insurgency against the Soviet-backed regime in Kabul in order to inflict upon Moscow what he described as its “own Vietnam.”

In 1998, after a civil war in Afghanistan that claimed the lives of up to 2 million people, Brzezinski told an interviewer he had no regrets: “What’s more important to the history of the world? The Taliban or the collapse of the Soviet empire? Some stirred-up Muslims or the liberation of Central Europe and the end of the Cold War?”

Washington celebrated the defeat suffered by the Red Army in Afghanistan—known as the “graveyard of empires”—as a contributor to the demise of the Soviet Union. There has been no attempt by the US media, however, to analyze the debacle suffered by US imperialism in the same country from a similar standpoint.

It has laid bare the bankruptcy of not merely the regime in Kabul, but the one in Washington as well. Two decades after the invasion of Afghanistan, US society is characterized by staggering levels of social inequality, the advanced decay of democratic forms of rule, which found violent expression in the attempted coup of January 6, and a homicidal policy of the US ruling elite in response to the COVID-19 pandemic that has killed more than 600,000 Americans. Decades of uninterrupted war and the anti-democratic measures imposed under the pretext of the “war on terrorism” have created the scaffolding for a police state dictatorship.

History has shown that the defeat of an imperialist power in war opens the gates to social revolution. While the response of US imperialism to the events in Afghanistan will be one of intensifying its preparations for far more dangerous wars, including against nuclear-armed China and Russia, the Afghan debacle and its discrediting of the policy of both Democrats and Republicans will only strengthen the growing movement of the American working class.

The decisive question is that of building a new revolutionary leadership that can mobilize the working class in the United States and internationally in a revolutionary struggle against war and the capitalist system that is its source.