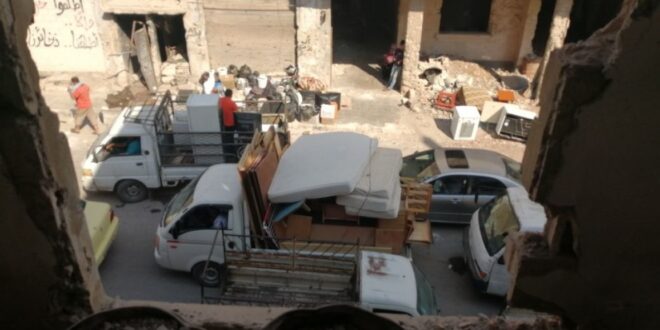 Syrian regime forces have continued to bomb areas of the city of Daraa despite a Russian-brokered temporary ceasefire deal, as negotiations over a permanent ceasefire continue.

Syrian regime forces continued to violate a newly signed ceasefire agreement in the southern city of Daraa in the early hours of Monday morning, shelling several areas of the city as well as the towns of Yadouda and Tafas in Daraa province.

The “Free People of Houran” media activist group reported that rebels in the Daraa Al-Balad area of Daraa clashed with troops from the regime’s Fourth Division, which is led by President Bashar Al-Assad’s brother, Maher.

On Saturday, a Russian-brokered temporary ceasefire agreement to halt the fighting in Daraa was reached but it was violated almost immediately by regime forces and allied pro-Iranian militias.

Adnan Al-Musalama, a negotiator representing residents of Daraa, told The New Arab’s Arabic-language service on Saturday that Iranian-backed militias had objected to the Russian-brokered agreement.

The fighting between regime forces and rebels in Daraa began in June after residents of the city refused to participate in the Syrian regime’s presidential elections, which were widely dismissed as a sham by the international community.

Regime forces have subjected the residents of Daraa Al-Balad to a siege, cutting off supplies of water, fuel, and flour.

The Russian-brokered ceasefire agreement would allow rebels to “regularise their status” and remain in Daraa under regime authority. Those who refuse will be evicted to rebel-held northwestern Syria.

Al-Musalama said that a point had been set up at a local school for rebels to hand over their weapons under the ceasefire agreement and that coaches were being prepared to evict anyone who wanted to leave the city.

The ceasefire agreement will be in place for 15 days until a permanent ceasefire deal between rebels and regime forces is reached.

The New Arab’s affiliate Syria TV reported that leaked images of the permanent agreement had been circulated on social media and that these had been greeted with outrage by activists from Daraa.

According to the images, the agreement stipulates that the rebels must hand over heavy and medium-range weaponry and people who haven’t “regularised their status” with the regime, as well as reveal the location of arms depots.

It also allows the regime to conscript young men who have so far avoided military service in the regime army.

However, Al-Musalama said that the permanent agreement was still “under discussion” and that his negotiating committee had not agreed to the deal.

The pro-regime Syrian newspaper Al-Watan reported that negotiations would continue on Monday between regime representatives and representatives of residents of Daraa, led by Al-Musalama.

Post Views: 89
Previous In the Shadows of the American Century – The Rise and Decline of US Global Power
Next Pentagon rushes more reinforcements to Kabul airport as panic disrupts evacuations