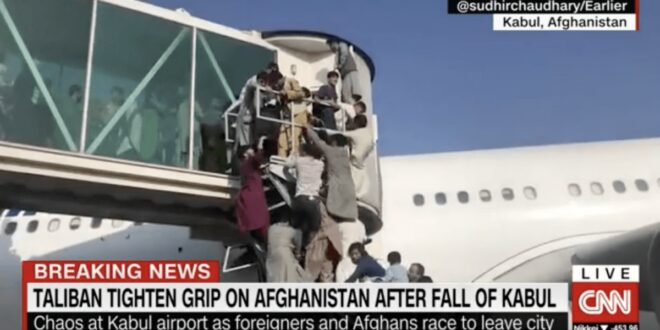 The United States, Afghanistan, and the Doctrinal Boundaries of Permissible Reflection

One of the doctrinal principles behind U.S. corporate-imperial news coverage and commentary and mainstream US politics is that the United States is a fundamentally benevolent force for good facing difficulties created by evil others and challenging situations not of Washington’s own making. Debate is permissible on immediate strategy and tactics but is not allowed on these core American Exceptionalist positions.

Hence, while there is contestation in U.S. media and political culture over how to respond to the flood of migrants seeking entrance to the United States on the nation’s southern border, there is little if any serious mainstream media discussion and critique of the long and many-sided role that U.S. capitalist imperialism has played in imposing abject misery on millions of people across Central America and Mexico.

The US invasion of Vietnam (and Cambodia) and Iraq could be criticized in dominant US media as bad strategy, as mistakes, but never as monumentally mass-murderous, racist, and imperialist war crimes and crimes against humanity.

John Kennedy (who initiated the US assault on Vietnam and Southeast Asia) could face mainstream criticism for failing to “properly” back the failed Bay of Pigs invasion of Cuba and then be praised for his handling of the Cuban Missile Crisis. There was no serious mainstream discussion of how the American Empire’s long neocolonial treatment of Cuba and its response to the brilliant Cuban Revolution bred a popular socialist revolution that naturally gravitated to the protective umbrella of the Soviet Union (or of another matter: how the imperialist Kennedy’s response to evidence of Soviet missiles in Cuba brought the world to the brink of nuclear annihilation and how it was the action of a Soviet sub commander that averted that fate).

The defeat of American invasions and occupations can be reported and discussed in the mainstream media and political culture as the consequence of strategic miscalculations by US policy makers but never as the result of legitimate popular resistance to American imperialism.

As a state senator, US Senator, and presidential candidate, the post-George W. Bush Empire re-brander Barack Obama made it clear that he viewed the invasion of Iraq as a “bad war” only in the sense of being strategically “dumb,” not because it was an immoral, racist, and petro-imperialist adventure meant to put the American boot on the giant Iraqi oil spigot. Candidate Obama even ended up blaming the Iraq “mistake” on Bush’s excessively idealistic desire to export democracy to Iraq – an absurd formulation in line with the American exceptionalist doctrine that Obama would articulate while personally drone-killing children and wedding parties, helping decimate Libya and Honduras, and deepening the US devastation of Afghanistan.

The assumption that the United States has the right to invade, attack, and occupy other nations is taken for granted in mainstream US media and politics. “The American people,” candidate Obama sanctimoniously told the Chicago Council on Foreign Relations in 2006, “have seen their sons and daughters killed in the streets of Fallujah.” The most remarkable thing about this comment wasn’t just that Obama left out the American Empire’s savage decimation of that key Iraqi city, replete with the use of radioactive munitions that sparked an epidemic of child leukemias, but that Obama just normatively assumed that American troops had any right to be patrolling the streets of a major Iraq metropolis!

“We lead the world,” presidential candidate Obama explained, “in battling immediate evils and promoting the ultimate good. … America is the last, best hope of earth.” Obama elaborated in his first inaugural address. “Our security,” the president said, “emanates from the justness of our cause; the force of our example; the tempering qualities of humility and restraint”—a fascinating commentary on Fallujah, Hiroshima, the U.S. crucifixion of Southeast Asia, the “Highway of Death” and more.

America is always good and well-intentioned. This is so doctrinally embedded in US ruling class ideology that evidence to the utter contrary must be reflexively dismissed out of hand. Within less than half a year of his inauguration, Obama’s rapidly accumulating record of atrocities in the Muslim world would include the bombing of the Afghan village of Bola Boluk. Ninety-three of the dead villagers torn apart by U.S. explosives in Bola Boluk were children. “In a phone call played on a loudspeaker on Wednesday to outraged members of the Afghan Parliament,” the New York Times reported, “the governor of Farah Province … said that as many as 130 civilians had been killed.” According to one Afghan legislator and eyewitness, “the villagers bought two tractor trailers full of pieces of human bodies to his office to prove the casualties that had occurred. Everyone at the governor’s cried, watching that shocking scene.” The administration refused to issue an apology or to acknowledge the “global policeman’s” responsibility.

By telling and sickening contrast, Obama had just offered a full apology and fired a White House official because that official had scared New Yorkers with an ill-advised Air Force One photo-shoot flyover of Manhattan that reminded people of 9/11. The disparity was extraordinary: Frightening New Yorkers led to a full presidential apology and the discharge of a White House staffer. Killing more than one hundred Afghan civilians did not require any apology.

This brings us to the current spectacle in Afghanistan, where Obama’s vice president and current US imperial warlord-in-chief Joe Biden is being made to look like a doddering buffoon by the chaotic and desperate scenes from the former US embassy and the Kabul airport. The total collapse of the formerly U.S.-sponsored Afghan regime cruelly mocks his claim just one month ago that everything was fine for an orderly US evacuation and the persistence of a non-Taliban government in the nation’s capital. Does this underestimation of the insurgent, anti-imperial forces’ political and fighting power sound at all consistent with earlier official American over-estimations of they and their illegitimate client regimes’ ability to militarily suppress resistance movement? It’s much the same story all over again, as in Iraq and Vietnam, replete with images of evacuation helicopters atop a besieged US embassy that are hauntingly like those from Saigon in 1975. (In Saigon, the helicopters could fly US personnel straight to offshore imperial aircraft carriers. In Kabul, they move the imperial evictees to a nearby airport where the scene is even more chaotic).

The Biden administration is being predictably and properly mocked for his strategic blundering and the bad intelligence that produced the memorably humiliating optics (“complete and utter mayhem and chaos”) in Kabul. At the same time, the occasion of Washington’s final departure is leading to a fair amount of officially permissible soul-searching about whether “America’s longest war” was “worth it” in the first place — whether it was a strategic mistake to have gone into Afghanistan, the well-known “graveyard of empires,” in the first place.

Notice two things outside the parameters of permissible discussion: the criminal nature of the U.S. invasion from day one, and the longstanding role of the US in training and equipping right-wing Islamo terrorism in Afghanistan and the broader Muslim and Arab world.

Afghanistan did not attack the United States on September 11, 2001, al Qaeda did, and al Qaeda was sheltered and funded mainly by Saudi Arabia and Pakistan, both major U.S. regional allies. France does not have the right to invade and bomb Vermont and the United States more broadly if a neofascist purportedly sheltered in the Green Mountains is said to have coordinated deadly terror attacks on the Eifel Tower and the French National Assembly. After 9/11, the various players in Afghanistan, including the Taliban government, were more than ready to talk and negotiate, possibly even hand over Osama bin-Laden for international prosecution. They did not want the world’s greatest superpower to pulverize the country. The US rejected these overtures and undertook instead to use “immense force used to demolish Afghanistan’s physical infrastructure and to break open its social bonds” (Noam Chomsky and Vijay Prashad). Like something out of the texts of the brilliant American anti-imperial New Left historian Gabriel Kolko, the American Empire went instead with the doomed and enormously destructive path of military punishment. More than 71,000 Afghan citizens died in the ensuing violence while American “defense” (empire) firms including Boeing, Raytheon, and Lockheed Martin cashed in on the cost-plus contracts that purchased the weapons of imperial mass destruction.

At the same time, as seems unmentionable in US media, the hated Taliban is to no small extent a U.S. product. As Noam Chomsky and Vijay Prashad explained last May from beyond the margins of acceptable US debate and memory:

‘Afghanistan has been in a civil war for half a century, at least since the creation of the mujahideen—including Abdul Haq—to battle the People’s Democratic Party of Afghanistan government (1978-1992). This civil war was intensified by the U.S. support of Afghanistan’s most conservative and extreme right-wing elements, groups that would become part of Al Qaeda, the Taliban, and other Islamist factions. Never once has the United States offered a path to peace during this period; instead, it has always shown an eagerness at each turn to use the immensity of the U.S. force to control the outcome in Kabul.’

It is of course unthinkable that any talking head at CNN or MSNBC, not to mention FOX News, would point out that the best time for women’s rights and advancement in modern Afghanistan came under communist power, in alliance with the Soviet Union between 1979 and the late 1980s. Driven by concerns of imperial geopolitics and not human rights (Orwellian US rhetoric notwithstanding), the United States sponsored arch-reactionary and hyper-sexist Islamist resistance to the socialist Democratic Republic of Afghanistan, backing elements it knew would crush women’s rights after defeating the socialist state.

Geopolitical considerations remain paramount for the US in Afghanistan, beneath all the media horror over Taliban atrocities and sexism. As Chomsky and Prishad wrote last May, “The United States, it appears, is willing to allow the Taliban to return to power with two caveats: first, that the U.S. presence remains, and second, that the main rivals of the United States—namely China and Russia—have no role in Kabul.”

Whether those goals are attainable remains to be seen but one thing is clear: Washington’s foreign policy remains today, as across its long and bloody history, about bottom-line imperial calculation first and foremost. Human rights talk is window-dressing meant to cloak wolfish global power considerations in the deceptive sheep’s cover of humanitarian concern.

Post Views: 99
Previous It is Government Weakness, Not Taliban Strength, That Condemns Afghanistan
Next After Afghanistan: Western militaries and the rise of new strategic threats