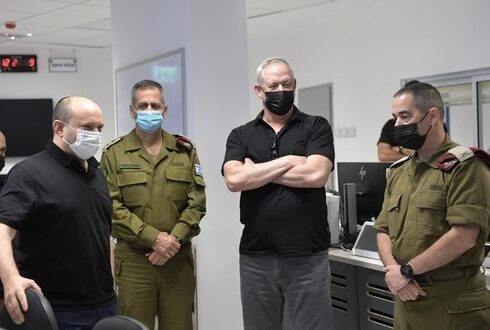 A day after rocket fire from the Gaza Strip resumed, Prime Minister Naftali Bennett warned on Tuesday that Israel will respond at a time of its choosing.
Follow Ynetnews on Facebook and Twitter

“We will operate at a time, place and conditions that suit us — and nobody else,” he said while visiting IDF Gaza Divison soldiers alongside Defense Minister Benny Gantz and IDF Chief of Staff Lt.-Gen. Aviv Kochavi.

On Monday, rockets were launched from the Palestinian enclave into southern Israel, setting off air raid sirens in the city of Sderot as well as the border communities of Avivim, Nir Am and Erez. The attack ended three months of relative calm along the Gaza border following an 11-day conflict between Hamas and Israel in May.

The military confirmed that one rocket that was launched from Gaza was intercepted by the Iron Dome aerial defense system. Israel did not retaliate for the attack.

The rocket attack came less than a day after Gaza’s terrorist groups issued an ultimatum demanding Israel open border crossings into the Hamas-controlled territory and allow the transfer of financial aid from Qatar by Monday night as was allegedly promised to them by Jerusalem at the end of the recent round of fighting, codenamed Operation Guardian of the Walls.

The factions said that Israel was preventing the reconstruction of the Gaza Strip and withholding financial Qatari funds to exert pressure on them.

Regarding the possibility that the rocket fire was retaliation by Islamic Jihad for four Palestinians who were killed Monday in clashes with Israeli troops in the West Bank, the premier said that Hamas is ultimately responsible for any attack, and “not rebels and not anyone else — only Hamas.”

Ahead of Monday’s attack, Islamic Jihad said in a statement that the blood of the four Palestinians “was not shed in vain.”

Gantz said that Israel is interested in aiding the people of Gaza and that it is “not their enemy.”

“The real enemy of the people of Gaza is Hamas, who is holding them hostage,” he said. “We would be happy to lift restrictions as much as we could through the Qatari aid and other programs, but only if we know the money is reaching the right places,” Gantz said, adding that Israel is determined to keep defending itself and will know when and how to do it.