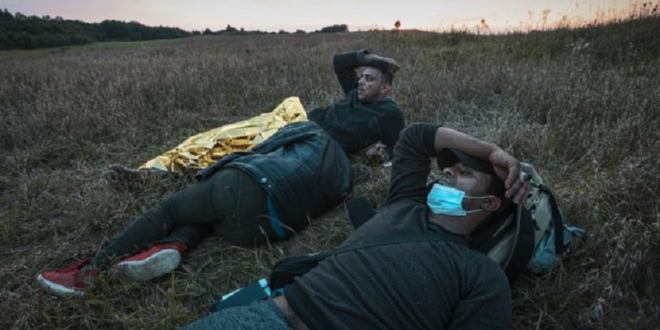 The decision by Poland and the Baltic nations to legalise the pushback of migrants at the Belarusian border is leading to a dangerous game of ping pong with vulnerable people, as BIRN has witnessed.

When BIRN came across Safaa Alnaseri near the village of Minkowce in northeast Poland, on the border with Belarus, he was badly shaken. In broken English, Safaa explained the Belarusian authorities had beaten him up: he had a bandage on his arm, his leg hurt, he was shaking uncontrollably and eventually broke down crying as he told his story.

The 35-year-old Iraqi and his two compatriots, Faysal and Mohammed, said they had arrived in Belarus by plane from Iraq almost a week ago.

Now, here on the Polish side of the border, they had no water and their phones had been broken – by the Belarusians, they claimed. And they were adamant that they do not want to go back to Belarus: all three had fresh bandages and Mohammed’s head was bleeding.

Safaa and his friends are caught up in a growing crisis at the EU’s borders with the intractable eastern European state. Over the summer, Belarus’s autocratic leader, Aleksandr Lukashenko, has been sending migrants – mostly from the Middle East and Afghanistan – over its western borders.

The three Iraqi men interviewed by BIRN did not share details about what persuaded them to come to Europe via Belarus in the first place, but media and think tanks, as well as comments from Belarusian officials themselves, indicate Lukashenko is using the migrants as a way to retaliate against the EU for its imposition of sanctions on his regime for its violent crackdown after a rigged presidential election in 2020.

The decision by Belarus to use the migrants as a weapon in its “hybrid war” with the EU has put in motion networks of intermediaries active between Belarus and the countries of origin of the migrants. People desperate to get into Europe have been presented with a new opportunity to reach the West.

Initially, Belarus concentrated the migrant flow on the Lithuanian border, with the country receiving over 4,000 migrants this year, 50 times more than in the whole of 2020. But efforts to block the migrants from entering, including using pushbacks, have reportedly led to a significant reduction in the numbers of people trying to cross into Lithuania.

At the same time, over the past few weeks Poland and Latvia have begun reporting significant increases in migrant crossings on their eastern borders.

Both Lithuania and Latvia are now officially pushing back migrants trying to cross the border outside of official border control points, and Poland is preparing to do the same, which could mean migrants end up caught in a dangerous back-and-forth across borders, with no one monitoring how their rights are being respected throughout this limbo.

Daily dropoffs
Minutes before the three men emerged on the hill in Minkowce on Saturday evening, near the barbed-wire fence that Polish border guards had recently put up on the border with Belarus, the BIRN team had seen a military truck drive by on the Belarusian side.

On hearing the truck, a Polish villager, whose house is situated right next to the border, told BIRN that the sound signalled the Belarusians were bringing more migrants to the border – an event the man claimed was now happening almost on a daily basis.

Over the past week, the Polish villager said that several large groups of up to 80 migrants had crossed over, some of whom had camped for up to a day on his field before being rounded up by Polish border guards.

Locals in several villages and towns along the border that BIRN visited, including Krynki and Zubrzyca Wielka, had all witnessed migrants over the past week, including many families with children. The locals told stories of migrants asking for water and food or help in getting a taxi out of the area, or sleeping in their fields.

Locals have now been instructed to call the border police as soon as they spot migrants. In Minkowce, it took less than 30 minutes for the border police to show up and apprehend the three Iraqi men after they were seen by a local youth biking by the fields where the migrants were resting. BIRN also witnessed border guards checking at random cars driving in the border area.

Since the beginning of August, border guards in the Podlaskie region, which includes this border area, have been reporting the crossing of migrants outside official border control points. The guards apprehended over 500 migrants between August 2 and August 9 alone.

One of the officers patrolling the border area that BIRN spoke to did say, however, there were so many migrants coming over the past two weeks that the “refugee centres were now full”.

Legalising pushbacks
Back in Minkowce, on the Polish-Belarusian border, Safaa, Faysal and Mohammed claimed this was not the first time they had entered Poland. The men said they had crossed into Poland before over the past few days, but had been sent back into Belarus by Polish border guards, only to attempt another crossing later.

One of the officers BIRN met while visiting the border area said Poland was not conducting pushbacks at the moment and that every person they apprehended was processed inside Poland.

But the Polish government is preparing to legalise pushbacks, following the example of its Baltic neighbours. A draft law, whose basic principles were published in mid-August, would allow Polish authorities to avoid processing asylum requests by people crossing the border outside of official crossing points.

Rights groups such as the Association for Legal Intervention, one of the main organisations offering legal assistance to migrants in Poland, claim the draft law is contrary to both national legislation and the 1951 Geneva Convention on the rights of refugees, which enshrined the principle of non-refoulement in international law: a refugee should not be returned to a country where they face serious threats to their life and freedom.

With governments in the region already conducting or at least preparing to conduct pushbacks into Belarus, the question arises of how these migrants’ basic human rights will be guaranteed as they are shunted back and forth across the border. So far, no relevant actor in the EU appears prepared to take responsibility for the safety of the migrants.

When legalising pushbacks, governments in the region work on the underlying assumption that Belarus is a safe country for the migrants. But critics say that is questionable given the violent crackdown by the Lukashenko regime on its opponents since the disputed election, as well as the injuries displayed by Safaa, Faysal and Mohammed that they blamed on the Belarusian police.

Speaking to Reuters, a European Commission spokesperson said redirecting people to official crossing points was “understandable” if migrants were attempting to cross the border at unauthorised places.

“Such measures are acceptable, as long as… the fundamental right of the persons concerned to be protected against refoulement (pushback) and access to the asylum procedure are respected at all times,” Reuters quoted the spokesperson in the article published on August 11.

However, the three Iraqi men BIRN spoke with in Poland carried visible and fresh injuries. They claimed the Belarusian police had beaten them.

BIRN asked the European Commission whether, confronted with such a case, they still thought pushbacks into Belarus were acceptable, The spokesperson said the EU executive is monitoring the situation in Poland. Under the Schengen Borders Code, the spokesperson explained that external borders may only be crossed at official border-crossing points, and the Code requires border guards to carry out border surveillance with the aim of preventing and discouraging persons from circumventing the checks at border-crossing points.

The Polish border guards BIRN spoke to said, however, that the vast majority of migrants are crossing in areas outside the official border control points. In practice, then, Frontex’s very narrowly defined mission means it cannot play a meaningful role in monitoring the rights of the Middle Eastern and Afghan migrants crossing back and forth over the Belarusian-Polish border.

Based on what BIRN observed at the border and locals’ accounts, the Belarusian authorities appear to drop the migrants off at various locations along the border, leaving them no idea of where they are or where an official border crossing point into Poland might be (they can be tens of kilometres away).

In these circumstances, accepting asylum applications only from those crossing via official border control points, as the new Polish legislation envisages, could result in a de facto blanket ban for this particular group of people.

The three Iraqi men, for example, had no functional phones to potentially search for where official border-crossing points are, even assuming they were aware of official procedures. But they did show BIRN traces of old wounds they claimed were suffered in Iraq, which is information that should be assessed by EU officials as a potential basis for receiving protection.

In response to a BIRN enquiry about the manner in which the agency could, given its deployment terms, help ensure that the human rights of migrants are respected at this border, a Frontex spokesperson said that: “The primal responsibility for border control lies with the EU Member States”, adding that Frontex only offers operational assistance.

Jonas Grimheden, head of the Fundamental Rights Office at Frontex, wrote to BIRN via Twitter, pointing out that “some [fundamental rights] monitors have already been sent to the Lithuania-Belarus border and we are preparing for deployment of monitors elsewhere in the region.”

“It does not have a broader mandate to monitor nor investigate human rights violations at the border.”