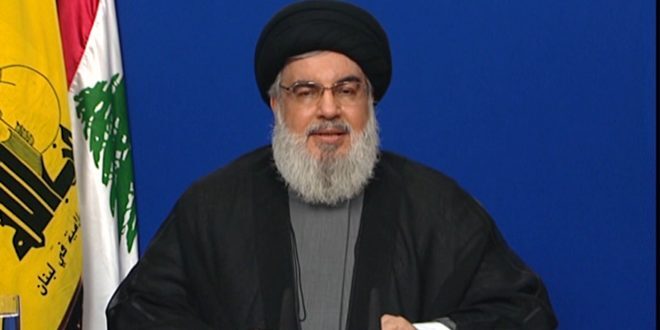 Hassan Nasrallah called the U.S. claims of fighting ISIS in Syria a lie, accusing the ‘occupation forces’ of looting the country, the Syria Times writes.

The Secretary-General of the Lebanese Hezbollah Resistance Movement Hassan Nasrallah has affirmed that the U.S claims about fighting ISIS in Syria are false and flimsy, as they are nothing but a pretext to stay in the region and strengthen this terror organization to use it in different areas for Washington’s own political agenda.

“The U.S. pretext to stay in Syria’s northeastern region is to help fight ISIS, which is a flimsy and false claim,” said Nasrallah, clarifying that those who defeated ISIS in this region are the Syrian Arab Army and its allies.

In a speech on Thursday marking the Tenth day of Muharram broadcasted in the southern suburb of Beirut, Nasrallah noted the existence of clear cut evidence that the U.S. is working to reproduce ISIS in Syria, pointing out that its occupation troops are transferring ISIS terrorists from an area to another to use them in the service of the U.S. agenda.

The Secretary-General of Hezbollah made it clear that the U.S. occupation forces are stealing the Syrians’ resources and they should leave the country.

“The U.S. forces should leave Syria because it has been proved that the real goal behind their presence in Syria is to loot the country’s resources, including its oil and gas, and to support certain separatist agendas which are completely rejected by the Syrian people.

Nasrallah reiterated that all the Syrian territories should be restored to the State’s sovereignty, hoping that the occupation troops will withdraw so the Syrian oil and gas can return to the Syrians who are suffering from the occupation’s practices and the U.S. and western coercive measures.

Regarding the Palestinian cause, Nasrallah stressed that confronting the Zionist entity, which is still occupying Palestine and parts of other Arab countries, is the top priority of resistance.

“Our stance is firm, which is to support the oppressed Palestinian people until they liberate their usurped land and rights,” he reiterated.

The U.S. embassy is running a war against the country

As for Lebanon, Nasrallah said that the country is being exposed to an economic war with aim of subjugating the Lebanese to the will of the Israeli entity. He pointed out that some parties are trying to impose certain options on the Lebanese people to serve Israel’s interest, emphasizing that the U.S. Embassy in Lebanon is the party that is running this economic war.

According to the al-Manar TV website, Nasrallah announced that the first of several ships loaded with fuel oil would sail from Iran to Lebanon within hours, warning the U.S. and Zionist entity against targeting it.

“This ship will be followed by other ships, but we gave priority to diesel oil on the first ship because it is a top priority and is linked to people’s lives,” he stressed.

He lashed out at Washington and the U.S. embassy in Lebanon, saying they were behind all this incitement for the Lebanese against each other.

“The U.S. embassy in Awkar is not a diplomatic mission; it is rather an embassy that’s conspiring against the Lebanese people. It’s running an economic and media war against Lebanon,” he indicated.

Post Views: 135
Previous Opposition Discusses Situation in Daraa with Central Committee
Next Who is Salem al-Meslet: Head of the Syrian Opposition Coalition