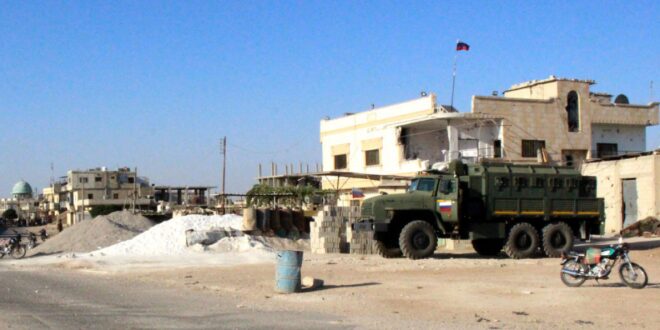 Syrian regime forces shelled Daraa on Thursday as disagreements between the local negotiation committee and residents caused the truce to collapse.

Syrian regime forces launched a flurry of rockets and artillery at the southern city of Daraa Al-Balad and surrounding towns on Thursday, as a deal to end a two-month siege on the opposition region collapsed.

The Iranian-aligned 4th Armoured Division fired around 30 rockets at the town of Tafas in the western countryside of Daraa, killing two and injuring six, according to local media outlet Horan Free. At the same time, regime forces shelled Daraa Al-Balad with tanks and artillery, as regime reinforcements arrived outside the city.

Daraa Al-Balad has been besieged by regime forces for over two months, following the city’s rejection of Syria’s sham presidential elections. For 63 days, regime soldiers have blocked all routes in and out of the city, preventing the entry of key goods – such as food and medicine to the city’s 50,000 residents.

Fighting erupted between the regime and opposition about a month ago, after regime forces attempted to storm the city but were rebuffed by rebel fighters. Since then, there have been daily clashes and shelling of the city by regime forces.

On Tuesday, a deal was reached between the regime and a negotiation committee representing Daraa Al-Balad, but only lasted a few hours before fighting resumed.

The agreement was meant to give amnesty to certain opposition figures wanted by the regime and safe passage to opposition-held northwest Syria for other wanted people. Certain regime forces – including the 4th Division – and local militias would also have to withdraw from the city.

In return, the regime’s Russian-linked 5th Corps would be allowed to enter Daraa Al-Balad and establish security checkpoints throughout.

The deal was scrapped after two men meant to be transferred to northwest Syria refused to board buses to northwest Syria, citing a “lack of guarantee” for their personal safety. There were also suspicions whether the regime would honour its promise to withdraw certain troops from the city.

The negotiating committee blamed these two men for the failure of the deal, claiming the actions of two “rogue” individuals who refused to accept displacement to northwest Syria scuppered it. Despite the deal falling through, about 51 people had been transferred to northwest Syria by Thursday night.

One of the men who refused to leave the city, Abu Abdo Musalemo, pointed to a deeper discontent with the decisions of the negotiation committee as the reason for the failure of the deal.

“There is no trust in the committee. They’re hiding many conditions of the deal and are misleading the people as to what is really happening. They are aligned with the regime,” Musalemo told The New Arab.

Several sources from Daraa Al-Balad echoed similar sentiments, telling The New Arab that the collapse of the deal on Wednesday was a rejection of what they saw as the acquiescence of the negotiation committee to the demands of the regime.

“We reject the turning over our weapons. Our weapons are for personal use and aren’t for political reasons. We have the right to defend our homes,” he added.

The initial demands of the negotiation committee – the complete withdrawal of regime forces and affiliated militias from the city and the settling of the status of wanted people within the city – have steadily dwindled under the force of regime shelling. Now, the negotiation committee is merely trying to secure the end of the siege and the fighting.

As a result of the shelling and fighting, about 38,000 have been displaced to adjacent cities and towns, according to the UN.