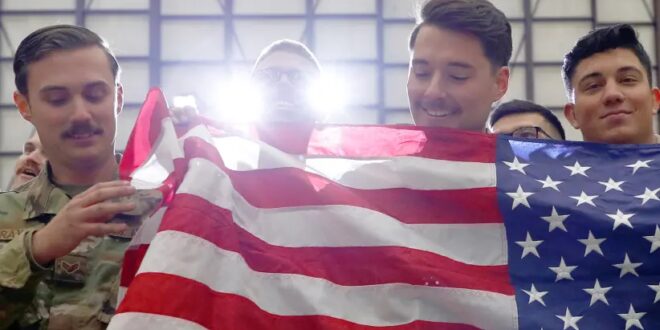 The American empire is ready to end

World management should never have been America’s task, and the Afghan misadventure should be its last imperial war.

Empire, American history’s most ambitious, contradictory, and costly era, is ready to end.

At a time when American society is torn on myriad other issues – from gun control and healthcare to welfare and abortions – imperial retreat has been one aim that Donald Trump as well as Barack Obama and Joe Biden all shared and practiced, albeit with varying degrees of clumsiness.

EMPIRE HAS been an element of history since the Akkadians conquered much of what sprawls between today’s Iraq, Iran and Oman. Still, no empire has been anything quite like the American.

The American imperium planted 800 bases worldwide, more than 20 times what the other four superpowers have combined. The number of US troops stationed abroad, 200,000, is equal to the size of the entire standing army of France. Some 150 of the world’s 195 countries host American troops.

America’s annual military spending, more than $770 billion, is larger than the next five military spenders combined. The 11 aircraft carriers with which Uncle Sam navigates the high seas equal the combined total of all other countries’ carriers.

What is this imperial investment’s purpose and yield, and how does America’s imperial motivation compare with those of previous empires?

“The guns of our warships in the tropic seas of the West and the remote East have wakened up to the knowledge of new duties,” said Teddy Roosevelt, referring to America’s first military victories overseas (Nathan Miller, Theodor Roosevelt: A Life, p. 319). “Duties” in this case meant not the needs, but the sway of a superpower. That’s what made him preach the usage of America’s unique location between the world’s two largest oceans in order to create the naval superpower it indeed became.

The same sense of imperial “duty” is what made Roosevelt mediate between Russia and Japan, an international role the US had never assumed. This “imperialism of duty” matured when the American military’s arrival in Europe swiftly decided the First World War.

By the end of the next world war, America’s imperial position was transformed: it was no longer a young nation asserting its newfound power, but was now driven by concern for the world’s very survival.

After having defeated bellicose dictatorships that attacked dozens of countries in a quest to seize resources and subdue nations, the American Empire now led the rest of the world’s resistance to the new totalitarian menace, Soviet communism.

That imperial goal was achieved. The Soviet Empire crumbled as swiftly as the fascist empires did before it. Now, with the Cold War won, the American Empire marched to its third phase, the one it would not win: proselytizing.

UNLIKE ROOSEVELT’S imperialism, which was about American glory, and unlike Harry Truman’s legacy, which was about Western self-defense, American imperialism was now about gospel. Suddenly reinforced by the fallen Warsaw Pact’s former members, the American empire was now reprogrammed as a democratizing empire’s sword and spear.

For the American empire, it was one horizon too many.

Imperial imposition of ideas has failed before America’s Afghan visitation, and will fail after it. Uncle Sam’s chances of making the world adopt his convictions were no better than those of Paul, Mohammed or Lenin’s chances of spreading their own faiths to all of mankind. The Afghan misadventure should therefore be America’s last imperial war.

It is one thing to wield power in order to protect an idea, the way America did during the Cold War. It is an entirely different thing to do in order to spread an idea. It doesn’t work.

That is the second reason the American Empire is now irrelevant. The first is that today’s rival superpowers, unlike the Soviet Union in its time, are not in the business of spreading faith. Russia and China are anti-democratic, but they don’t challenge the way the West is run, not in their diplomacy and not in their propaganda.

Why, then, surround the globe with American troops, bases and aircraft carriers? And why spend on defense an annual $770 billion, when every American metropolis festers with sprawling ghettos where millions of undereducated Americans languish in poverty, indignity and despair?

The American imperium has become an absurdity that neglects America’s guts and empties its coffers while fighting for an impossible cause against enemies that no longer exist.

America’s imperial period has been intense and in many ways rewarding, but it wasn’t part of the American way. Unlike the British and French, the Americans did not build colonies. Americans remained insular, as if nodding to George Washington’s assertion in his farewell address:

“The great rule of conduct for us in regard to foreign nations is … to have with them as little political connection as possible.”

Yes, there is now a whole free world that didn’t exist in Washington’s time. America is, and should remain, its leader. The rest of the world, however, will remain under despots until their citizens rebel, because empires, even America’s, can’t change the world the way only rebels can.

Post Views: 87
Previous Benny Gantz is confused on Iran – opinion
Next Withdrawal can’t sweep away terrorists or their ambitions