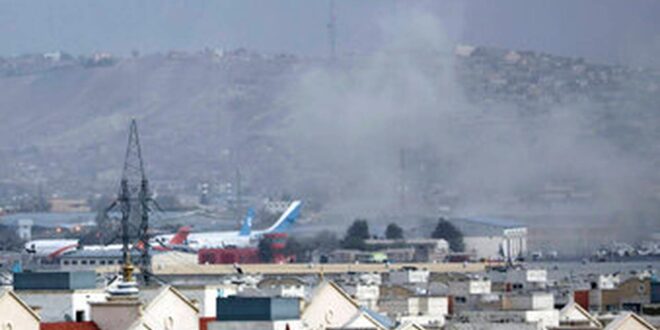 US troop death toll now at 13, with 18 wounded, in HKIA attack: CENTCOM

The number of U.S. service members killed in a series of attacks outside of Hamid Karzai International Airport in Kabul on Thursday is now 13, with another 18 wounded, according to a spokesman for U.S. Central Command.

The casualty toll increased after the head of CENTCOM held a Pentagon briefing Thursday afternoon, said Navy Capt. Bill Urban. During that event, CENTCOM commander Marine Gen. Frank McKenzie reported that there were 12 troops killed and 15 troops wounded. Urban did not specify the service branch of the latest fatality in his statement.

The latest victim of the attacks was a soldier, a defense official told Military Times.

There were also 10 Marines killed, Maj. Jim Stenger, a Marine Corps spokesperson, said in a statement. Several more were wounded and are being cared for at this time, he said.

Earlier in the day, the Associated Press reported that a Navy corpsman was among those killed.

The injured service members are “in the process of being medevaced from Afghanistan on specially equipped C-17s with embarked surgical units,” Urban stated. “We continue to provide the best possible medical care to those injured. Our thoughts and prayers continue to be with the injured and to the friends and family of those who were killed.”

In a statement, Marine Commandant Gen. David Berger said these “fallen heroes answered the call to go into harm’s way to do the honorable work of helping others. We are proud of their service and deeply saddened by their loss. As we mourn, we also keep those who are still over there protecting Americans and our Afghan partners at the forefront of our thoughts. Our Marines will continue the mission, carrying on our Corps’ legacy of always standing ready to meet the challenges of every extraordinary task our Nation requires of her Marines.

“I am continually humbled by the courage and warrior spirit exhibited every day by Marines across the globe,” he said. “The sacrifices Marines make on behalf of freedom must never go unnoticed or unappreciated. I ask that you keep these Marines and service members, and especially their families, in your thoughts and prayers.”

The attack began when an ISIS suicide bomber approached a group of Marines outside the Abbey Gate, McKenzie said during the briefing. A second confirmed blast occurred outside the Baron Hotel, a few hundred yards from the Abbey Gate, where British forces have been gathering groups for escort to the airport. The blasts were followed by gunfire into the nearby crowds.

“We’re still working to calculate the total losses. We just don’t know what that is right now,” McKenzie said during a Pentagon briefing. “Their loss weighs heavily on us all.”

The attack was one of the single deadliest incidents for the U.S. military in the 20-year conflict in Afghanistan, surpassed only by 2005′s Operation Red Wings, which killed 17, and the 2011 downing of Extortion 17, a CH-47 Chinook carrying 30 U.S. troops.

The troops were the first killed in action in Afghanistan since Feb. 2020. Part of the U.S. agreement to pull troops out of the country included a promise from the Taliban that they would stop attacking U.S. troops.

One of the bombers struck people standing knee-deep in a wastewater canal under the sweltering sun, throwing bodies into the fetid water, AP reported. Those who moments earlier had hoped to get on flights out could be seen carrying the wounded to ambulances in a daze, their own clothes darkened with blood.

The attacks are expected to continue.

“We believe it is their desire to continue those attacks and we expect those attacks to continue, and we’re doing everything we can to be prepared for those attacks,” McKenzie said. “And that includes reaching out to the Taliban, who are actually providing the outer security cordon around the airfield, to make sure they know what we expect them to do to protect us, and we will continue to coordinate with them as, as they go forward.”

While McKenzie did not say he trusted the Taliban, he gave them a hat tip for their efforts to screen for threats at checkpoints leading up to the airport. The U.S. and the Taliban have worked together for years to counter ISIS, a common enemy.

“Now, the other thing we do is, we share versions of this information with the Taliban, so that they can actually do some searching out there for us and we believe that some attacks have been thwarted by them,’ he said. “Again, we’ve been doing this …we’ve been doing this since the 14th.”

Multiple sources, including on the ground in Kabul, confirmed to Military Times that troops were welding shut the airport gates in response.

Evacuations are continuing, however. McKenzie said several buses full of civilians have been driven onto the airfield since the attack, while processing of roughly 5,000 evacuees continues.

“We continue to focus on the protection of our forces in the evacuees, as the evacuation continues,” McKenzie said. “Let me be clear: while we’re saddened by the loss of life, both U.S. and Afghan, we’re continuing to execute the mission. Our mission is evacuating U.S. citizens or third-country nationals, especially immigrant visa holders, U.S. embassy staff and Afghans at risk.”

McKenzie said it’s his understanding that there are still more than 1,000 Americans still left to evacuate, though the biggest determining factor for evacuation has been the ability to get to the airport safely.

“The plan is designed to operate while under stress, and under attack. And we will continue to do that, we will coordinate very carefully to make sure that it’s safe for American citizens to come to the airfield,” McKenzie said. “If it’s not, we’ll tell them to hold, and then we’ll work other ways to try to get them to the airport.”

The Pentagon confirmed Wednesday that three helicopter flights had gone into Kabul to pick up people not able to get to the airport.

Roughly 104,000 people have been evacuated since late July, he said.

For now, he added, the several thousand soldiers and Marines on the ground are equipped to protect themselves and continue evacuations, he said.

Assessed threats include rocket or mortar attacks from outside the airport’s perimeter, which can be countered with gun systems positioned to shoot them down.

“We also know that aim to get a suicide, vehicle-borne suicide attack in if they can, from a small vehicle to a large vehicle,” McKenzie said. “They’re working all those options.”

Commands on the ground had been expecting such an attack from ISIS, he said. On Wednesday, the State Department sent out warnings for Americans to stay away from the airport.

Prior to Thursday’s attack, three security incidents had resulted in the injury of one Marine and the death of an Afghan troop.

Secretary of State Antony Blinken on Wednesday also warned that U.S. forces and refugees faced “the very real possibility of an ISIS-K attack” at the airport in coming days.

“We’re taking every precaution, but this is very high-risk,” he told reporters.

State Department officials had warned all U.S. citizens at the airport gates to leave “immediately” on Wednesday and await further evacuation instructions.

Despite that, large crowds remained gathered at various points around the airport, hoping to escape the city.

The attack occurred around the same time that President Joe Biden was holding his daily meeting with national security officials on updates on the situation in Afghanistan. White House officials had no immediate comment on the explosion.

“We thought this would happen sooner or later it’s tragic that it happened today is tragic, there was this much loss of life,” McKenzie. “We are prepared to continue the mission.”