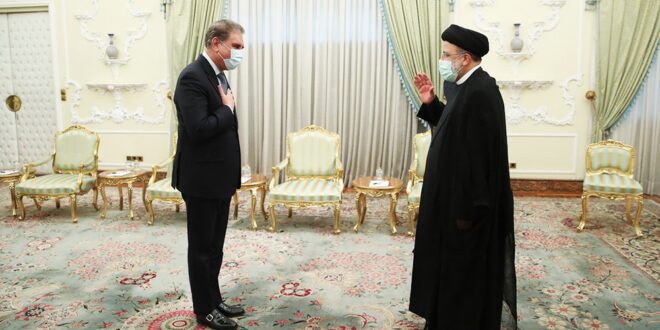 Pakistan hopes to work with Iran in all areas to further strengthen bilateral ties, Foreign Minister Makhdoom Shah Mahmood Qureshi said while speaking to the president of Iran, Seyed Ibrahim Raisi, in Tehran on Friday.

According to a statement issued by Pakistan foreign ministry, Qureshi briefed Raisi on the ongoing situation in Afghanistan and discussed Pakistan’s perspective on the situation.

He said “it was important for the neighbors of Afghanistan for continued consultations on the way forward as the peace in Afghanistan would lead to economic and political benefits for the region,” the statement read.

Raisi in turn acknowledged Qureshi’s efforts to strengthen “regional approach in the wake of situation in Afghanistan and expressed hope that Afghanistan would achieve peace and stability”.

Iran’s IRNA News meanwhile reported that Qureshi said he plans to visit four regional countries, Iran, Tajikistan, Turkmenistan and Uzbekistan, in a bid to consult with heads of state on recent developments in Afghanistan.

IRNA also reported that Raisi expressed dissatisfaction with the current economic exchange between the two neighboring states, and called for an expansion of trade ties.

Post Views: 105
Previous Kheder Khaddour: Currently, Decentralization is Not Realistic in Syria
Next Lessons from Afghanistan to Syria