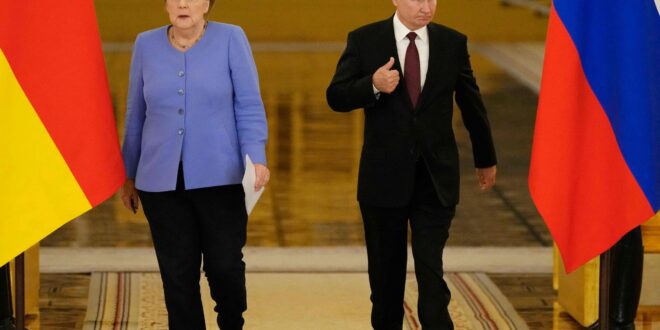 President Vladimir V. Putin of Russia said the Taliban takeover of Afghanistan showed that it was time for the West to end its “policy of imposing someone’s outside values from abroad.”

President Vladimir V. Putin of Russia said on Friday that the Taliban takeover of Afghanistan showed that it was time for the West to end its “irresponsible policy of imposing someone’s outside values from abroad.”

Still, Mr. Putin pledged to work with the West to “normalize the situation” in Afghanistan and to “build good neighborly relations” with the country.

“We know Afghanistan, we know it well,” Mr. Putin said, a reference to the Soviet Union’s disastrous war there in the 1980s. “We saw how this country is built and how counterproductive it is to try to force unnatural forms of governance and public life upon it.”

His comments came at his final news conference with Chancellor Angela Merkel of Germany, who will leave office after national elections in September. Ms. Merkel, who speaks Russian and has been Mr. Putin’s closest confidant among Western leaders, observed that Russia’s and Germany’s political systems had “drifted further apart” in her 16 years in office.

She made a farewell visit to the Kremlin on Friday, insisting after a three-hour meeting with Mr. Putin that “communication channels must remain open” despite political differences.

But Mr. Putin — speaking exactly a year after the near-fatal poisoning of his most prominent domestic critic, Aleksei A. Navalny — made it clear that he had little interest in Ms. Merkel’s views on Russia’s domestic affairs.

“Russia already hit its limit for revolutions in the 20th century,” Mr. Putin said, rejecting Ms. Merkel’s call for Mr. Navalny to be freed. “We don’t want any more revolutions.”

In Moscow, events on Friday demonstrated Mr. Putin’s determination to crack down on what has remained of Russians’ political freedoms while maintaining his conflict with the West.

The Kremlin has fought back against rising discontent at home by claiming that opposition figures like Mr. Navalny are in fact Western agents working to undermine Russia.

Russia’s Foreign Ministry issued a 1,700-word statement this week blaming Germany for helping to orchestrate “the hype around Navalny” in order to “carry out more attacks against us in the forums of various international organizations as part of a strategy of all-out containment of our country.”

Independent media in Russia are also under fire, and another blow came on Friday when the Justice Ministry added TV Rain, Russia’s best-known independent television news channel, and iStories, an investigative news outlet, to its list of “foreign agents.”

The designation — a label claiming that the organization is acting on behalf of a foreign government — means that the outlets’ journalists will now have to attach lengthy disclaimers even to social media messages, or they will face prosecution. The outlets are likely to see an exodus of advertisers as a result.

“It was clear that this would happen sooner or later,” the chief executive of TV Rain, Natalia Sindeyeva, told another news outlet declared a foreign agent this year, Meduza. “But that’s OK — we won’t give up that easily.”

The crackdown on the opposition and the news media is taking place ahead of Russia’s parliamentary elections in September. While Mr. Navalny’s movement has been outlawed as extremist, his allies are working to organize a coordinated protest vote to elect as many candidates as possible who are not from the ruling party.

Russia’s telecommunications regulator said on Friday that it had demanded that Apple and Google remove Mr. Navalny’s app from their app stores. Mr. Navalny, in one of his regular Instagram posts relayed by lawyers who visit him in prison, this week urged Russians to download the app in order to coordinate their votes.

“Thanks again to everyone,” Mr. Navalny wrote in another post published Friday, marking the anniversary of his poisoning. “I’ve received a second chance to live and to make those decisions that I consider to be correct and honest.”

Ms. Merkel helped rescue Mr. Navalny by pressuring the Kremlin to release him for treatment in Germany after he fell into a coma in Siberia on last Aug. 20. She has also pushed back against Mr. Putin in public and in private over human-rights violations in Russia and the Kremlin’s actions in Ukraine.

But she has also been criticized for ceding undue influence to German business interests, such as with the nearly completed NordStream 2 gas pipeline that will allow Russia to bypass Ukraine in its gas exports to Germany.

“I am very happy that despite great differences we have always been able to keep these communications channels open,” Ms. Merkel said. “Sometimes, I believe, we’ve even been able to make a little bit of a difference, but there is still a lot to do.”