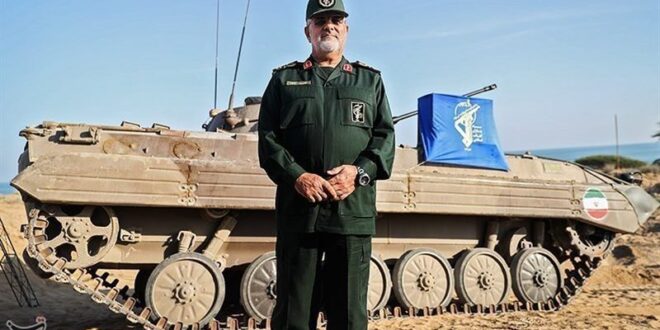 A senior IRGC commander cautioned the local residents of the Kurdistan Region in north of Iraq to stay away from the strongholds of terrorists, because Iran is planning crushing military attacks against terrorist groups which create insecurity at the border areas.

During a visit to the IRGC military bases in Iran’s northwestern border areas on Monday, Commander of the Islamic Revolution Guards Corps Ground Force Brigadier General Mohammad Pakpour gave a warning to the armed terrorist groups which take advantage of the northern parts of Iraq in the Kurdistan Region to upset the security of Iran’s border areas.

“We cannot tolerate the continuation of such conditions and will give the necessary response to the terrorists,” the general warned.

Pointing to the circumstances in that region and the possibility of a “decisive and crushing” response to the terrorist groups that are affiliated with the enemies of the Islamic Republic and have taken shelter in the northern areas of Iraq, the commander asked the local residents in those regions to stay away from the strongholds of the terrorists to be safe from any damage.

General Pakpour also bemoaned the fact that Iran’s warnings have gone unheeded although the Kurdistan Regional Government’s officials have been informed about the hostile activities of the armed terrorist groups on their soil and about the attempts to infiltrate into Iran with the aim of threatening security.

“The terrorist and anti-Revolution groups affiliated with the global arrogance and the foreign espionage services have been using the lands in northern Iraq for years to upset security and calm in the Islamic Republic of Iran’s border areas and harass the residents of those regions,” the general added, noting that the Baghdad government and the KRG officials have been given the necessary warnings about such hostile activities.

The Iraqi government and the Kurdistan Regional Government should not allow the terrorists to act freely and set up strongholds on those territories for threatening and upsetting Iran’s security, the commander stressed, warning that the failure to address the issue would run counter to the principles of good neighborliness and amicable relations between the two countries.