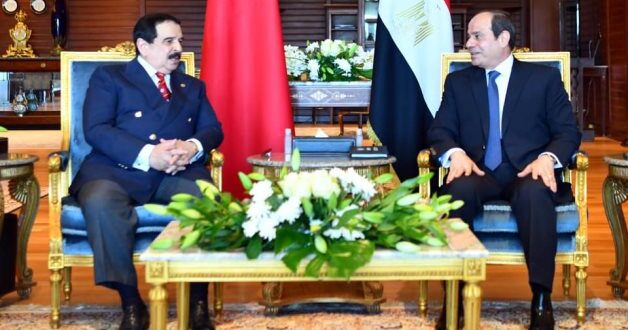 Sisi and King Hamad discussed the latest developments regarding the Renaissance Dam (GERD) in light of the recent presidential statement issued by the United Nations Security Council on the dam, the Presidency said in a statement.

Expanded discussions were held in the presence of the two countries’ delegations, the statement said.

King Hamad affirmed supporting all efforts to preserve Egyptian and Sudanese legitimate rights and water security regarding the River Nile.

The Bahraini king also affirmed supporting efforts aiming to reach a fair, binding and comprehensive agreement on the filling and operation of the dam in a way that prevents harm and benefits all parties in line with the international law.

This includes intensifying the pace of bilateral meetings held on the level of senior officials of the two countries periodically amid consecutive developments the Middle East region currently witnesses.

King Hamad, for his part, affirmed that his current visit to Egypt comes in continuation of the historic and special relations path tying the two countries’ governments and peoples.

The Bahraini king praised Egypt’s pivotal and firm role as a pillar for security and stability in the region as well as its efforts to promote joint Arab action at all levels.

The king praised the great and qualitative progress witnessed by the Egyptian-Bahraini relations in various political, economic, developmental and other fields.

He stressed the common concern to move forward towards further development of these relations.

The meeting discussed regional issues, especially the developments of the Libyan crisis and the situations in Afghanistan. They also discussed the joint efforts to face the implications of the coronavirus pandemic.

According to the Presidency, the discussions reflected mutual understanding between the two sides in dealing with these issues.

The meeting agreed on the need to maximize Egyptian-Bahraini cooperation and coordination to develop the joint Arab action system, in order to help protect Arab national security and enhance Arab capabilities to address the challenges facing the region and the growing threats to regional security.

This comes especially in light of the foreign interference in the sovereign affairs of countries in the region.

In this regard, Sisi stressed Egypt’s commitment to its firm stance towards the security of the Gulf and its rejection of any practices that seek to destabilize it.

The meeting discussed developments of the peace process in the Middle East.

The Bahraini king praised the recent Egyptian moves in this file as well as the tireless Egyptian efforts to consolidate the ceasefire between the Israelis and the Palestinians.

He also hailed Egypt’s initiative for the reconstruction of the Gaza Strip.

The two sides affirmed the importance of working in this regard to intensify international efforts with a view to establishing the peace process and resuming negotiations, in an effort to settle the Palestinian crisis based on international legitimacy resolutions.

Post Views: 156
Previous Overkill: Reforming the Legal Basis for the U.S. War on Terror
Next Yemen: At least 50 Houthi rebels and pro-government troops killed in clashes