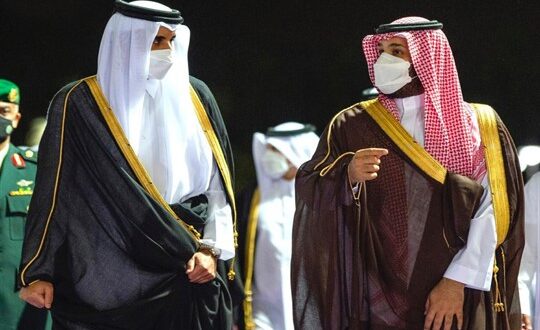 Don’t Get Your Hopes Up About Middle East Rapprochement

Talking is good, but how much should expectations and hopes be raised now that Middle East rivals are talking without necessarily putting a pause on their disputes?

Friday saw the unveiling of a new “public display of diplomacy” in the broader region when an aide to Saudi Crown Prince Mohammed bin Salman tweeted a picture of three political heavyweights hanging out at the Red Sea in what appeared to be swimming trunks.

The recent proliferation of diplomatic engagement would seem to bear out the argument of officials in the region as well as many outside observers, particularly in the United States, that if Washington and other foreign powers simply took a back seat, Middle Eastern governments would step up and take a more proactive role in resolving their differences.

According to Trita Parsi of the Quincy Institute, for instance, without the guardrails that come from open-ended American security guarantees, American allies and partners in the region are choosing to negotiate with their adversaries rather than pursue maximalist agendas and destabilizing armed conflicts.

Unfortunately, history doesn’t seem to bear out the case for optimism. Diplomacy is always preferable to war, of course, and it’s a positive development to see Middle Eastern governments talking rather than—or in addition to—fighting. But it’s ahistorical and a little narcissistic to conclude that regional governments are talking only because of something the United States has done or not done. And it’s unrealistic to expect that dialogue will by itself bridge the major gaps separating the regional players that have been the most significant drivers of conflict and instability in the broader Middle East.

A true rapprochement will only come if and when the most powerful governments in the region—Saudi Arabia, the UAE, Iran, Turkey and Israel—reassess some of their currently incompatible interests.

On some fronts, serious change has already begun, although not necessarily in ways that will calm regional tensions. The intra-Gulf Cooperation Council feud officially came to an end in January, when relations between Qatar and its leading critics, Saudi Arabia and the UAE, were formally restored. The photo that surfaced Friday was testament to this thaw.

And it’s been more than a year since the Abraham Accords, the historic cooperation agreements between the governments of Israel and several of its Arab neighbors. Those agreements represented an official sea change in the policy of key U.S. Arab client states, which chose to set aside the question of Palestinian rights and instead normalize relations with Israel and deepen previously furtive security partnerships absent any final settlement of—or even progress in resolving—the Israel-Palestine conflict.

Other new channels of regional diplomacy have also opened up, including talks between Iran and some GCC countries, and Turkish outreach to Arab governments—including Egypt and the UAE—that it had held at arm’s length because of differing views on the Arab revolts.

All this dialogue is welcome, but will it actually yield productive outcomes worthy of celebration? Parsi argues that “Biden’s pending withdrawal from the region predictably unlocked an untapped potential for the Middle East actors to resolve their problems on their own and to try to build structures necessary to ensure a more peaceful and stable region.”

In fact, much of the diplomacy underway represents jockeying and realignment for further conflict. The GCC states are awash in weapons purchased mostly from the United States, and they are looking for ways to counter Iran—a major factor in the resolution of the intra-GCC feud and the open partnership with Israel. Iran, meanwhile, continues to strong-arm the region with its heavy-handed political and military interventions in Iraq, Syria, Lebanon and Yemen.

Other deep-seated strategic differences remain just as unresolved, and potentially destabilizing, as ever. More Middle Eastern states than ever before have built and are using their military capabilities to intervene in regional conflicts. The map of players and interventions is vast and messy, and the region’s governments don’t fall into clear camps, even if there are some strategic alignments, largely along the lines of pro- and anti-Islamist, pro- and anti-Iran, and pro- and anti-authoritarianism.

Today the entire region arguably boasts only four states—Israel, Turkey, Iraq and Lebanon—that contain elements of democratic governance, and the latter just barely. The region’s authoritarian leaders have a consistent record of poor judgment, making bad policy choices and using force to pursue maximalist agendas, knowing that, if they fail, their subjects might suffer but they will remain in power.

The United States has certainly played a role in fomenting instability and supporting dictatorships in the Middle East; American intervention sowed chaos in Iraq and has worsened the situation in many other conflict zones. But at least since 2010, it is the region’s authoritarians that have been primarily responsible for the Middle East’s instability. The authoritarian lack of accountability, and not the U.S. security umbrella, is the ultimate moral hazard trapping the region in a cycle of violence and poor governance. Regional diplomacy won’t make things worse, and it might resolve some disagreements. But as long as the region is dominated by authoritarians, no amount of dialogue will end the endemic instability and conflict.

The U.S. freezes some aid to Egypt. Last week, the Biden administration announced that it would withhold $130 million of its annual aid to Egypt over human rights concerns, although it did not make public any specific changes that Egypt would have to make in order to restore the funding. The move failed to satisfy rights advocates, who had been pressing Biden to make good on his promise to restore values and human rights as central planks in U.S. foreign policy. Egypt receives approximately $1.3 billion annually in aid from the United States. A statement signed by 19 leading U.S.-based rights groups argued that Biden was taking an even weaker position against Egypt’s human rights abuses than former President Donald Trump did in 2017. Historically, the Egyptian government has not changed policies in response to aid conditions. In one of the few unofficial reactions to the U.S. announcement, a popular broadcaster and supporter of the Egyptian government called it “blackmail.”

The Houthis carry out controversial executions. Yemen’s Houthis publicly executed nine people Saturday in Sanaa. The nine were convicted for their alleged role in an airstrike that killed a senior Houthi official three years ago. Rights groups had called for the Houthis to grant a new trial in the case.