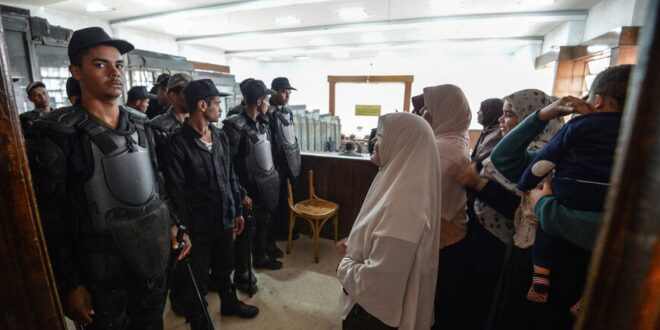 Is Brotherhood’s appeal for reconciliation with Cairo genuine?

It seems the Egyptian state will not respond to the recent Muslim Brotherhood calls for reconciliation, despite pressure by the US administration to fix its human rights record.

The Muslim Brotherhood is calling for dialogue with the Egyptian presidency without preconditions.

In a letter dated Sept. 14, prominent Brotherhood leader and the group’s former commissioner for international relations Youssef Nada said the “door is open for dialogue” with the Egyptian presidency. “We learned in politics that setting preconditions foils dialogue,” he added.

Nada’s letter came in response to President Abdel Fattah al-Sisi’s live speech on Sept. 11 during the launching of the National Strategy for Human Rights, the first of its kind, which aims to develop Egypt’s human rights record. “Over the past 90 to 100 years, Egyptian society has been imbued with a specific thought,” Sisi said, in reference to the ideology of the Brotherhood that was founded in 1928.

“I am not in disagreement with them (the Brotherhood), but on the condition that they respect my path and do not intersect with me or target me … I will accept [the Brotherhood’s] thought, but it will not impose it on me, and it will not [use it to] pressure me — not only on me as a person, but also on Egypt and society,” he added.

Over the past years, the Muslim Brotherhood has occasionally expressed its will to reconcile with the Egyptian state, but so far initiatives for reconciliation have been conditional. On Aug. 14, 2018, on the fifth anniversary of the violent dispersals of the sit-ins held by supporters of former President Mohammed Morsi in Rabaa and al-Nahda squares, the group announced a 10-item initiative, calling for early presidential elections.

The initiative back then further stressed that the group is a national faction and a peaceful organization. It also underscored the importance of the rights of the victims of the dispersal of the sit-ins and the need to achieve justice.

This year, on March 23, Ibrahim Munir, the Brotherhood’s deputy general guide, reiterated the group’s readiness to reconcile with the state on several conditions. “If the Egyptian opposition, of which we are part, is offered a dialogue with the regime that covers the conditions of the detainees and improves the conditions of the people, we will not refuse. We would be surely wrong to refuse,” he said during an interview with Al-Jazeera.

In a tweet on Sept. 11, Egyptian opposition journalist Gamal Sultan said Sisi opened the door to reconciliation with the Brotherhood in his speech and said he was ready to accept their presence. Sultan argued, however, that Sisi linked dialogue to three conditions: The Brotherhood must recognize his authority and legitimacy, they must not stand in his way or challenge his ruling power, and they must not criticize him.

Hassan Nafaa, professor of political science at Cairo University, told Al-Monitor Sisi’s recent speech was interpreted as a call for reconciliation with the Muslim Brotherhood. “Sisi tried to throw the ball in the group’s court and blame it for exploiting the Egyptian people’s ignorance and religious slogans to achieve its goals and gain power,” he said.

Nafaa said the Brotherhood’s recent call for reconciliation aims to test the waters and explore the state’s intentions, especially as it comes in the wake of major international and US pressure on Egypt to fix its human rights record.

He said the call for dialogue follows the Egyptian state’s attempts to appease international pressure by proposing a strategy to develop human rights in a bid to convey an image to the world that Egypt has a democratic climate and seeks to promote human rights conditions.

On Sept. 15, a US State Department spokesperson revealed the Joe Biden administration will withhold $130 million worth of military aid to Egypt unless Cairo meets specific requirements related to human rights.

Earlier this year, on March 12, 31 countries, including European countries, the United States, Canada, Australia and New Zealand, issued a joint statement addressed to the United Nations Human Rights Council expressing their concern about the violation of freedoms in Egypt. The statement called on Egypt to refrain from resorting to anti-terrorism laws to muzzle opponents, human rights defenders and journalists, and to end pre-trial detentions.

“These reconciliation steps [by the Brotherhood], however, remain a mere attempt to embarrass the state and to show that it does not tolerate the opposition and refuses to hold dialogue with it. I do not expect the state to respond positively despite international criticism. The Egyptian state sees this group as a threat to its existence and identity,” Nafaa said.

Samir Ghattas, a former parliament member and head of the Middle East Forum for Political and Strategic Studies, told Al-Monitor, “It is possible for the state to reach some political understandings with the reformist movement within the Muslim Brotherhood, but not with the Qutbi movement, which is prone to violence and confrontation with state institutions.”

He noted the state succeeded in exhausting and pressuring the group so that it could impose its conditions on it. “This is all the more true in light of the Egyptian-Turkish reconciliation. Egypt had required Turkey to stop funding, supporting and embracing the Brotherhood. This also coincides with the waning influence of the group in Morocco and Tunisia. All these factors have weakened the group’s negotiating position with the state,” Ghattas added.

On June 24, Turkish authorities had asked journalists affiliated with the Muslim Brotherhood to stop their media activities from its lands, whether on satellite platforms, social networking sites or YouTube. The measure seems to fall within the scope of Ankara’s efforts to achieve rapprochement with Egypt.

Most recently, in Morocco, the governing Justice and Development Party — the Brotherhood’s branch in the North African country — lost most of its seats in parliament during the Sept. 8 legislative elections, gaining only 12 seats compared to 125.

Commenting on the US pressure on Egypt, Ghattas said the amount of aid withheld by the Biden administration is rather small and will not pose a real threat to the state. He ruled out an escalation or a suspension of more aid to Egypt by the US administration in the upcoming period. “For Washington, Cairo is a regional pillar of stability in many fields, especially in the Palestinian file and relations with Israel,” he said.

The United States has been allocating $1.3 billion in annual military aid to Egypt since the signing of the Camp David peace agreement between Egypt and Israel in 1978.

On May 21, US President Joe Biden thanked Sisi for the Egyptian efforts that were made to reach a cease-fire agreement between the Israelis and the Palestinians in the Gaza Strip. He praised the crucial role played by Egyptian officials in this diplomatic process.