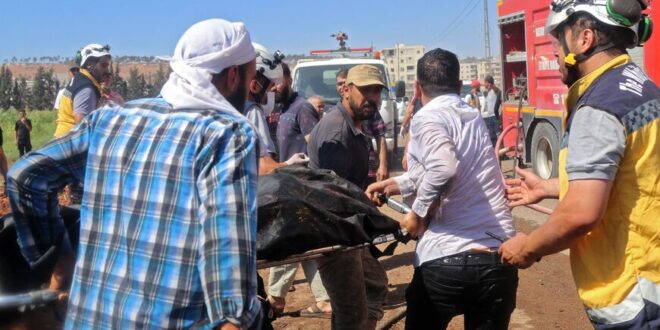 The United Nations’ human rights office on Friday updated the death toll from Syria’s civil war for the first time since August 2014.

The United Nations has counted more than 350,000 deaths from Syria’s ruinous civil war, a figure the UN human rights chief acknowledged on Friday is a major undercount.

The body hasn’t released an official death toll from the conflict since August 2014’s count of 191,369 civilian and combatant deaths. Shortly after, the UN suspended its monitoring work as the situation on the ground grew more dangerous.

In March 2021, Syria marked 10 years since the peaceful protests erupted against President Bashar al-Assad and sparked a decade-long civil war between the Russian-backed government and opposition forces seeking to oust it. As Syria passed the grim milestone in March, the UN Human Rights Council requested that the UN resume its work counting civilian casualties.

In what UN High Commissioner for Human Rights Michelle Bachelet described as a “minimum verifiable number,” her office said Friday that it has now compiled a list of 350,209 identified individuals killed in the conflict from March 2011 to March 2021. One in every 13 deaths is a woman and nearly one in every 13 is a child, her office said.

“We assess this figure of 350,209 as statistically sound, based as it is on rigorous work,” Bachelet said. “But it is not — and should not be seen as — a complete number of conflict-related killings in Syria during this period.”

Bachelet said the new death toll is “certainly an under-count of the actual number of killings.” For comparison, the Syrian Observatory of Human Rights, a UK-based war monitor, puts the estimated death toll since 2011 at more than 606,000.

The UN rights office documented the most killings in Aleppo province, which witnessed one of the war’s bloodiest battles in 2016. Heavy death tolls were also recorded in rural Damascus as well as Homs, Idlib, Hama and Tartus provinces.

“Behind each recorded death was a human being, born free and equal, in dignity and rights,” Bachelet told the UN Human Rights Council on Friday.

“We must always make victims’ stories visible, both individually and collectively, because the injustice and horror of each of these deaths should compel us to action,” Bachelet said.

Since the 2011 rebellion, the government has managed to take back all but a pocket of opposition-controlled northwest Syria and an enclave in northeast Syria run by US-backed Kurdish forces.

In March, the UN Commission of Inquiry on Syria said tens of thousands of civilians who were arbitrarily detained in Syria remain forcibly disappeared. Thousands more have experienced torture, sexual violence or death in detention by the government or other armed groups, the panel said in a report.