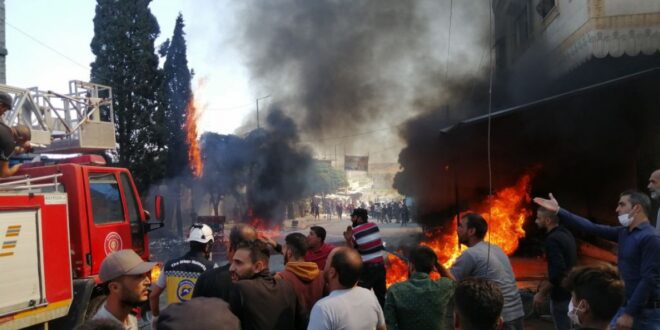 At least two people were killed and 18 others injured on Tuesday when two bombs exploded in the city of Jarabulus in northern Syria, which is under the control of Turkish-backed Syrian opposition fighters.

The blast was also near the headquarters of the local council of Jarabulus, according to the sources.

At the same time, a motorcycle bomb exploded on a road adjoining the Euphrates River, killing two people and injuring 13 others.

The sources said that six children and three women were among those injured in the two blasts. Four of the injuries were critical, they said.

Firefighters rushed to put out the fire caused by the first blast, while rescue workers evacuated survivors.

Local police arrived at the scene late and were unable to prevent crowds from gathering and endangering lives, the report added.

Frequent bomb blasts have happened in Jarabulus ever since Turkish-backed Syrian groups captured the city from the Islamic State group in 2016.

The Turkish-backed groups blame the bombings on the Kurdish People’s Protection Units (YPG), who have been targeted in Ankara’s interventions in northern Syria over the course of the war.

Post Views: 67
Previous Afghanistan Can Be an Opening for U.S. Diplomacy With Russia
Next Qatari ambassador meets Saudi diplomat in Riyadh