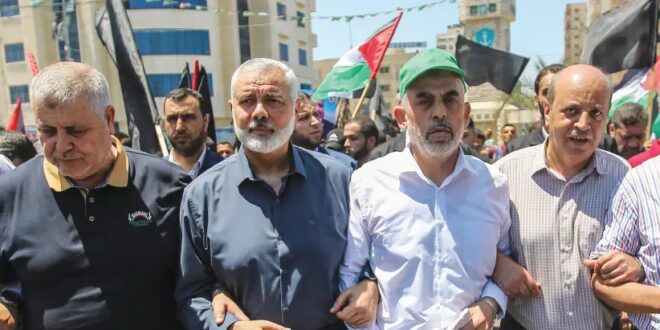 A Hamas delegation will reportedly discuss a possible prisoner exchange deal, among other issues, during a visit in Egypt this week.

A Hamas delegation headed by the movement’s leader, Ismail Haniyeh, visited Egypt on Sunday to discuss a number of issues, with the movement announcing the visit the night before.

Hamas’s leader in Gaza, Yahya Sinwar, is reportedly part of the delegation as well. According to reports, the delegation will discuss ongoing efforts to reach a prisoner exchange with Israel, and continuing attempts concerning an agreement for calm between Gaza and Israel.

Zaher Jabarin, a member of the Hamas political bureau, said last month that the movement had provided mediators with a “clear road map” for a prisoner exchange agreement with Israel, and that Hamas was also insisting on the release of all ex-prisoners who were rearrested after being freed in the Gilad Schalit prisoner exchange deal in 2011.

The Commission for Prisoners and Ex-Prisoners Affairs warned on Sunday that the prisoner movement in Israeli prisons has decided to start “escalating steps” in light of what it called “unprecedented Israeli attacks” on Palestinian prisoners, calling the alleged attacks “war crimes.” The commission did not specify what steps would be taken.

Hamas official (de facto premier) Issam al-Da’alis also joined the delegation to Egypt on Sunday to discuss the reconstruction of the Gaza Strip and the work of Egyptian teams in Gaza, according to the Palestinian Safa news agency.

Da’alis also plans to discuss the Rafah border crossing and trade, as well as other issues relevant to the relationship between the Palestinians and Egypt, according to the report.

A delegation of businessmen also headed to Egypt on Sunday to discuss a number of issues concerning the reconstruction process and transportation between Egypt and Gaza, according to Safa. The businessmen intend to stay in Egypt for a week.

The PIJ delegation will discuss several important files, according to the report, which did not specify which issues would be discussed.

The Hamas visit and planned PIJ visit to Cairo come after a week in which eight Palestinians were killed by Israeli gunfire, including three Hamas operatives and three PIJ operatives.

Three Palestinians were killed by IDF fire on Thursday morning, one in the West Bank, one in Jerusalem, and one next to the perimeter fence in the northern Gaza Strip.

An IDF officer and soldier were severely wounded and five Palestinians were killed by IDF troops last Sunday after armed clashes broke out between Palestinians and Israeli security forces during a wave of arrest operations across the West Bank.