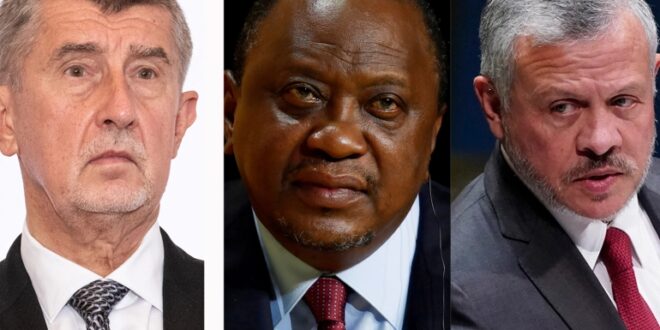 Who has been named in the Pandora Papers?

Some of those named after secret files were leaked to a consortium of journalists that revealed offshore deals.

A massive global investigation has exposed the ties between world leaders to the hidden world of offshore wealth collectively worth trillions of dollars.

Dubbed the Pandora Papers, the landmark probe, published on Sunday, was conducted by the International Consortium of Investigative Journalists (ICIJ) – an ensemble of 600 journalists from 150 media outlets in 117 countries.

Digging into more than 11.9 million documents leaked from 14 offshore financial services firms, the ICIJ found that 35 heads of state and government and more than 300 politicians have set up offshore structures and trusts in tax havens from the British Virgin Islands, Seychelles, to Hong Kong and Belize.

In addition to the politicians and heads of states, singer Shakira and former Indian cricket captain Sachin Tendulkar are among celebrities and sport stars named in the investigation.

Here is a look at some of those names:

Jordan’s King Abdullah II amassed about $100m worth of property in the United States and United Kingdom through secret companies. They were purchased between 2003 and 2017 via firms registered in tax havens and include properties in Malibu, southern California, and Washington and London.

DLA Piper, a London law office representing Abdullah, told the ICIJ that he had “not at any point misused public monies or made any use whatsoever of the proceeds of aid or assistance intended for public use”.

The royal palace said in a statement on Monday that the king’s ownership of private properties in the UK and the US was not a secret, adding that privacy and security reasons were behind not disclosing it.

These include Prime Minister Najib Mikati, his predecessor Hassan Diab, Riad Salameh, the governor of Lebanon’s central bank – currently under investigation in France for alleged money laundering – and former minister of state and the chairman of Al-Mawarid Bank Marwan Kheireddine.

The consortium said Kheireddine and Diab did not respond to requests for comment while Salameh said he declares his assets.

He told Al Jazeera that: “Using offshore entities could be considered as forms of tax evasion for US and EU nationals but this is not the case for Lebanese nationals.”

The Pandora Papers show that prominent members of Pakistani Prime Minister Imran Khan’s government, donors to his party and family members of the country’s powerful military generals moved millions of dollars of wealth through offshore companies.

Two members of Khan’s cabinet – Water Resources Minister Moonis Elahi and Finance Minister Shaukat Tarin – were prominent in the leaks, alongside more than 700 other Pakistani citizens.

The consortium said the documents contained no suggestion that Khan himself – who rose to power in 2018 on the back of promises to arrest Pakistan’s “corrupt” political elites – owns offshore companies.

The report said Czech PM Andrej Babis moved $22m through offshore companies to buy an estate on the French Riviera in 2009 while keeping his ownership secret.

Babis, speaking on Sunday in a TV debate ahead of October 8-9 elections, denied wrongdoing and said “the money left a Czech bank, was taxed, it was my money, and returned to a Czech bank”.

The investigation found Azerbaijani President Ilham Aliyev and his family have secretly been involved in British property deals worth more than 400 million pounds ($542m), according to the BBC.

The files show how the family bought 17 properties, including a 33-million pound ($44.8m) office block in London for the president’s 11-year-old son.

The Guardian newspaper said the files provided evidence that the US state of South Dakota rivalled opaque jurisdictions in Europe and the Caribbean for financial secrecy.

The documents reveal almost $360bn in customer assets are sitting in trusts in South Dakota, some of it tied to foreign individuals and companies accused of human rights abuses and other wrongdoing, it said.

Kenya’s President Uhuru Kenyatta and six members of his family have been linked to 13 offshore companies, according to the documents.

The Kenyattas’ offshore investments included a company with stocks and bonds worth $30m, the BBC reported.

Tony Blair, the UK prime minister from 1997 to 2007, became the owner of an $8.8m Victorian building in 2017 by buying a British Virgin Islands company that held the property, and the building now hosts the law firm of his wife, Cherie Blair, according to the investigation.

The two bought the company from the family of Bahrain’s industry and tourism minister, Zayed bin Rashid al-Zayani.

Buying the company shares instead of the London building saved the Blairs more than $400,000 in property taxes, the investigation found.

The Washington Post said Russian woman Svetlana Krivonogikh became the owner of a Monaco apartment via an offshore company incorporated on the Caribbean island of Tortola in April 2003, just weeks after she gave birth to a girl.

At the time, she was in a secret, years-long relationship with Russian President Vladimir Putin, the Post said, citing Russian investigative outlet Proekt.

The report also revealed Putin’s image-maker and chief executive of Russia’s leading TV station, Konstantin Ernst, got a discount to buy and develop Soviet-era cinemas and surrounding property in Moscow after he directed the 2014 Winter Olympics in Sochi.

Ernst told the organisation the deal was not secret and denied suggestions he was given special treatment.

Ukraine’s President Volodymyr Zelensky, who has been vocal on anti-corruption issues, used a network of offshore companies to buy three upmarket properties in London.

His office said it had been a way of protecting himself against the “aggressive actions” of the regime of his predecessor, the pro-Russia president Viktor Yanukovich.

The leaked documents revealed Chilean President Sebastian Pinera, one of the country’s wealthiest men, used offshore companies in the British Virgin Islands for dealings involving the Dominga mining project, which his family co-owned in part with a friend.

The final payment on the mine’s sale in 2011 hinged on the government declining to declare its location in north-central Chile a protected natural reserve, according to the report. The government – at that time headed by Pinera – did not do so, despite appeals from environmentalists, nor did subsequent governments.

When investigators looked into the case a few years later, Pinera said he had not been involved in managing the companies and had not even realised the connection with Dominga.

A statement issued on Sunday from the president’s office noted that prosecutors and courts decided in 2017 that no crime had been committed and Pinera had not been involved.

Montenegro’s President Milo Djukanovic and his son in 2012 allegedly established a trust and hid their wealth in a complicated network of companies, according to the investigation.

Djukanovic’s office said that he did establish a business trust with his son in 2012, while not in office. After he became the prime minister later the same year, Djukanovic transferred all the rights to his son, the office said. While Djukanovic was one of the owners there had been no business transactions, they said.

In a statement sent through his press office, Paulo Guedes said he provided all the necessary information to the Public Ethics Commission when he took office in the government in 2019.
Mexico

Three prominent Mexican business tycoons with a combined fortune of about $30bn are among those named in the leaked documents, media involved in the investigation reported.

According to the allegations, 25 of the Mexicans named together moved about $1.27bn to offshore jurisdictions for the purchase of luxury goods.

China’s only politician to be named in the Pandora Papers is a female entrepreneur who the report says set up an offshore firm to trade US stocks, according to Bloomberg.

Feng Qiya, a delegate to China’s annual parliamentary pageant, the National People’s Congress, in 2016 set up an offshore company in the British Virgin Islands called Linkhigh Trading Ltd. to make the transactions, according to the International Consortium of Investigative Journalists.

The company had $2m in assets and was registered with the US Securities and Exchange Commission, but is currently inactive, ICIJ said.

Two former leaders of Hong Kong have been named in the Pandora Papers leak.

Leung Chun-ying, or CY Leung, reportedly did not declare his income from the sale of shares of a Japanese company while still serving as the Chinese territory’s chief executive. Tung Chee-hwa, a billionaire, allegedly set up offshore companies after he retired from office.

CY Leung was Hong Kong’s leader between 2012 and 2017, while Tung was the city’s first chief executive after Hong Kong’s handover to China in 1997. He remained in charge until 2005.

Both men are now serving as senior members of an advisory committee for the Chinese government and there are reports that CY Leung could seek a political comeback as the term of the current Hong Kong chief executive, Carrie Lam, comes to an end.

The Indian Express, part of the ICIJ consortium, said the Pandora Papers showed that businessman Anil Ambani and his representatives owned at least 18 offshore companies in Jersey, the British Virgin Islands and Cyprus.

Set up between 2007 and 2010, seven of these companies had borrowed and invested at least $1.3bn, the report said.

In 2020, following a dispute with three Chinese state-controlled banks, Ambani, chairman of Reliance Group, had told a London court his net worth was zero.