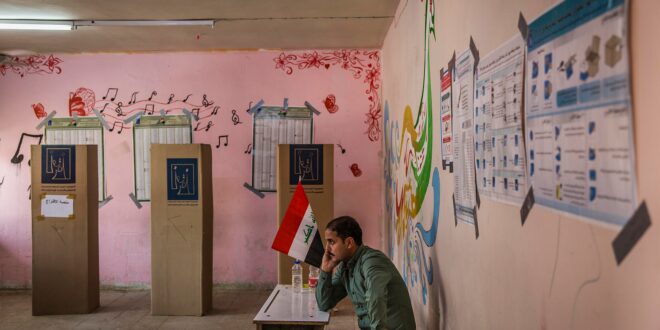 Despite new electoral system and process, elections may deliver far more modest outcomes than the people demand and need.

On October 10, Iraq will hold national parliamentary elections, the fifth national elections since Iraq adopted its 2005 constitution. And despite waning expectations about what these elections might accomplish, they remain an important avenue for pursuing change through peaceful means. Once the new parliament is elected, it will have the task of choosing a new speaker of parliament, president, prime minister and cabinet in what is usually a protracted, months-long process.

Early Elections and Deficit of Trust

The aim of these elections, which are held earlier than their original 2022 schedule, is to respond to demands of the Iraqi public for reforms, better services, jobs and an end to external influence. The hope is to also break the political gridlock among the bigger political actors that the 2018 national elections produced.

However, the elections are taking place in an environment of huge public distrust in the country’s political parties, leaders, government and electoral process in general. The most recent elections, which occurred in May 2018, offer a very bad baseline. Governed by an election law and electoral commission that favored the bigger parties instead of the public, the 2018 elections were characterized by a fraudulent process — especially among the diaspora and displaced populations — and undermined further by low voter turnout. Many believe the actual turnout did not exceed twenty percent.

Meanwhile, starting in October 2019, the extreme response by armed actors and security forces against peaceful protesters killed hundreds, injured thousands and resulted in the kidnapping or assassination of civic leaders. All this and more deepened the public’s distrust in the political class, government and the viability of change.

The government of Iraq and the international community have taken steps to improve the integrity and credibility of the electoral process and reassure voters, but it’s uncertain if this will significantly increase turnout. The public encouragement to vote by Grand Ayatollah Ali al-Sistani, the most senior and revered Shia leader in Iraq, may help to some extent.

Iraq adopted several changes in the building blocks of their electoral process. A new election law changed the number of electoral districts from 18 to 83 in an effort to bring candidates closer to their constituency and moved the country away from lists to a single non-transferable vote system. The Independent High Electoral Commission’s (IHEC) new commissioners are also now judges. Both changes attempt to break — or at least decrease — the domination of bigger political parties, enabling citizens to vote for the candidate directly and possibly freeing up party members somewhat.

The supreme federal court, which endorses election results and adjudicates electoral disputes, has been reactivated with new members and a full quorum. IHEC issued more biometric cards for enhancing registration and verification of eligible voters. The federal government closed camps for internally displaced persons (IDP), which pushed many IDPs back to their home provinces, and IHEC decided that Iraqis outside the country, living as refugees in neighboring countries or as a part of the diaspora would not be able to vote. This may reduce vulnerabilities to fraud, but also the number of people who might have voted for independent candidates.

At the request of the government of Iraq, the U.N. Security Council decided to boost the U.N. role in the elections through technical assistance and monitoring. The U.N. has 130 monitors and experts in addition to the hundreds more coming from the European Union, other countries and international organizations. But monitoring officials won’t be able to cover all of the nearly 8,000 polling centers throughout the country.

President Barham Saleh and Prime Minister Mustafa al-Kadhimi are not running in the elections, which allowed them to focus on improving the electoral process rather than on their own party or campaign. However, both leaders are interested in retaining their positions, which would require the vote of the new parliament and key political parties.

Despite all these efforts, vulnerabilities remain. The two most cited problems are political money and uncontrolled armed actors, but other concerns are prominent as well — such as staff at IHEC who may have loyalty to their parties, candidates buying votes, millions not updating their voter registration or having biometric cards, intimidation outside the security zone of the polling centers, prevention of people from voting altogether and areas of single tribal concentration that give them an advantage.

Political Competition and Prospects of Violence

The new electoral law localizes competition in Iraq to the smaller electoral districts within each province. While the competition is fierce among the different parties, mostly within the same ethno-sectarian groups except in the mixed population areas, the electoral platforms maintain the decreasing sectarian narrative; a continuation from 2018.

Ethnic and religious minorities are concerned that like previous elections, the bigger political parties will control their seats. Meanwhile, women candidates face an even more uphill battle: the constitutional quota may become a ceiling rather than a floor in the way seats will be assigned to them; cultural norms limit their campaigning; and they are subject to fabricated character attacks.

A key concern in this election, as in the previous one, and beyond is the wide spread of arms among non-state actors and tribes and how this might be used to settle differences. The government has taken steps to provide security and communicated through the commander-in-chief and other leaders the preparedness of security force to ensure public safety.

Possibilities for the New Government

It is expected that the elections will yield a larger number of smaller blocs in parliament, which would make government formation and decision-making more difficult and time consuming.

A new government will have a heavy burden to tackle, including undertaking major reforms, fighting corruption, improving services, providing jobs, preventing an ISIS resurgence, keeping COVID under control, countering regional influences and proxy groups that destabilize Iraq, and dealing with the status of U.S. troops in the country, which looms large, especially after the U.S. withdrawal from Afghanistan.

A protracted government formation process would further delay addressing key challenges that affect citizens’ lives and may create space for more instability. A strong and reform-minded government could build on the progress started by current Prime Minister al-Kadhimi both domestically and regionally. But real reforms that would make meaningful difference are less likely because the same political actors would dominate the next parliament and government. The capacity of government bureaucracy just in terms of modern knowhow is woefully lacking.

Iraq’s neighbors are watching these elections with high interest. This will be the first Iraqi elections where Iran will not have the benefit of Qassem Soleimani, the former commander of the Quds Force, who used to have a strong role in the government formation process. Iran is the most influential neighbor, and they will likely remain so after these elections. Turkey expanded its military operations in Iraq but has seen its political allies shrink in popularity and power. Turkish President Recep Tayyip Erdogan personally met with the head of two Sunni-Arab coalitions days before the election. Arab states of the region back different groups in Iraq and seek to remain engaged as Iraq also seeks to connect and integrate more with regional Arab states.

The election process and its outcomes will more than likely not meet the expectations of the Iraqi people, especially those who have been protesting in recent years. Since we already know the key political actors will remain in control of the parliament and government, the focus needs to go to trying to change their actions, build on the results of these elections and expand change beyond the current elections. The Iraqi people certainly deserve better than the miserable reality they currently face: systemic corruption, widespread poverty, poor services, lack of jobs, violent responses to protests and more.

But when you look at the developments in the broader region and the difficulty of change, what the protesters in Iraq have achieved is not so little. Since October 2019, they have pushed a prime minister and cabinet to resign, secured changes to the building blocks of the electoral process, forced new elections and garnered the attention of the international community, including the U.N. Security Council. They showcased that Iraqi youth are the renewable energy and hope of the country. Addressing their needs in development, good governance and economic opportunity is the antidote to an ISIS resurgence, armed groups, backsliding of democratic institutions and external malign interference.

Iraq will also need to restore the layer of provincial councils and hold elections for new members soon to complement the national government with effective governance at the critical provincial level, where the rubber meets the road more so than the federal level.

Additionally, change must be seen and pursued beyond the elections and subsequent government formation. Ensuring that bodies like the Human Rights Commission and the Communications and Media Commission renew membership in line with the spirit of change is also key. Civil society organizations and community leaders can continue to play their part. For example, on October 2, over 70 confederate tribal leaders [Shyukh al-Umoom] signed an agreement in Baghdad that supports the rule of law, reforms tribal customary laws and makes them more compliant with human rights. The agreement was the outcome of a dialogue process supported by USIP and led by our partners Sanad for Peacebuilding and the Network of Iraqi Facilitators.

Iraq remains important for regional stability, the national security interests of regional and global powers and beyond. The country has many of the elements necessary for positive change — increasingly active youth and civil society, governance-minded tribal leaders, a plethora of media outlets, younger and more moderate members of traditional parties, and the clout of al-Sistani. But the country still lacks a catalyst to harness these positives together. Iraqis and the international community need contingency planning for alternative outcomes if the elections and a new government do not deliver peaceful change while they push to make the most of the current elections and the government that would result from them.