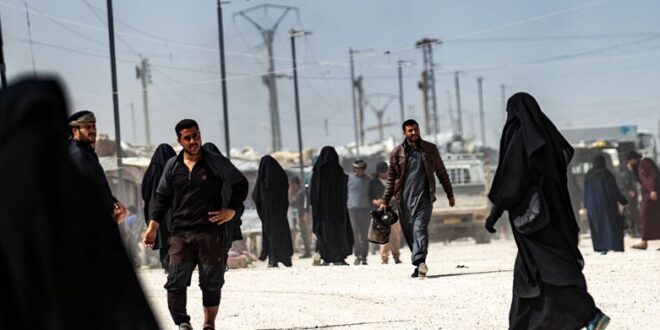 “Recently, 2 terrorists were arrested including a Daesh (ISIS) financier.”

The US-led coalition confirmed on Thursday that the Syrian Democratic Forces (SDF) carried out a successful anti-ISIS operation that resulted in the arrest of an ISIS financier in the notorious al-Hol camp.

The official Twitter account of the US-led coalition against ISIS said that the SDF, with the assistance of the coalition, continue daily operations against ISIS that “are crucial to paving the way for stability and prosperity in NE (Northeast) Syria.”

“Recently, 2 terrorists were arrested including a Daesh (ISIS) financier,” the account added.

The SDF’s Coordination and Military Operations Center said on Wednesday that SDF special forces with help from the coalition captured an ISIS financier in al-Hol, which is located in Syria’s eastern Hasakah province near the Iraqi border.

“Documents and military equipment were confiscated – another step to #DefeatDaesh (ISIS),” the SDF said.

Although the SDF and the coalition announced the territorial defeat of ISIS in Syria in March 2019, sleeper cell attacks continue in northeastern Syria.

The majority of al-Hol’s residents are Iraqis and Syrians. However, there is also a large number of foreign residents and their children who are thought to have links to ISIS living in the notorious camp.

Al-Hol has over 60,000 residents altogether.

Local authorities decided in October 2020 to expedite the departure of displaced Syrian families as part of a new reform program.

The camp has suffered from ISIS assassinations and smuggling attempts.