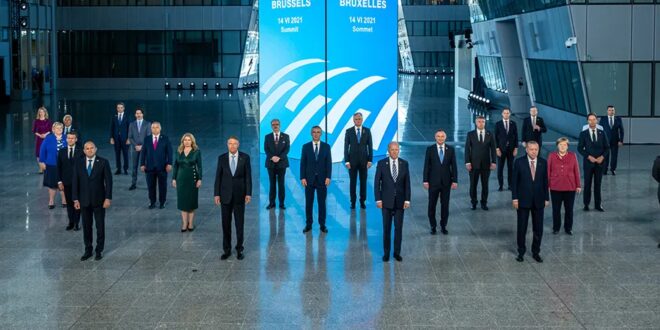 NATO has its problems, and the emergence of a European defence identity is an imperative. But the severing of transatlantic links is never the answer.

No one has forgotten that French President Emmanuel Macron referred to NATO in 2019 as ‘brain dead’. In Brussels, there were comments on this decidedly French positioning which found the expression a little too vivid, while also recognising that Donald Trump was at that time putting the Atlantic alliance to the test. But equally, some did everything they could to sweep the problem under the carpet. A reflection group duly reported on the future of NATO, and the Alliance embarked on the preparation of a new Strategic Concept. However, nothing has fundamentally changed at NATO headquarters, where a sigh of relief was breathed when – soon after his election – US President Joe Biden proclaimed that ‘America is back’.

And yet… The early, weak warning signals that should have alerted the Alliance to its impending problems have now grown into signals of weakness, and that is not good news.
The Warning Signs

What do we see? First, there is Turkey, with NATO’s second-largest military, which takes liberties with the Alliance without really paying the price. It purchased a Russian missile defence system; it has contributed to tensions in the eastern Mediterranean; it has refused to subject itself to NATO inspection a href=”https://www.lemonde.fr/international/article/2020/01/04/le-chef-de-l-onu-met-en-garde-la-turquie-contre-l-envoi-de-troupes-en-libye_6024761_3210.html”>on compliance with the Libyan embargo; it has blocked Polish and Baltic defence plans; and it attacks Kurdish militias who support the Coalition against ISIS. In recent months, Ankara has been less vocal, but it is fair to say that it took time before legitimate European concerns were heard.

And then there is Afghanistan: the first and most important NATO operation outside its traditional theatre of operations, and the first and only time that Article 5 of its Charter has been invoked, to come to the aid of the US after the 9/11 terrorist attacks. The Taliban takeover is the Alliance’s biggest failure, even if it struggles to accept this verdict. With the Taliban’s victory, the terrorist risk has become real again: in short, a sad record for an alliance.

At the very moment when the EU publishes its first ‘Indo-Pacific strategy’, it is superbly side-lined by a new Washington–London–Canberra axis

Within NATO itself, the US withdrawal took place without consultation with or consideration of its allies. When the UK, France and Germany pleaded with the US for an extension of the deadline for their military withdrawal, were they heard? No. Did this conversation take place at NATO? Not at all. It took an extraordinary G7 meeting for it to take place. Has NATO debated its exit strategy? Did Alliance defence ministers even meet to coordinate the withdrawal? Not once. It all happened during the summer break, we are told. Did someone say ‘brain dead’?

And then there is AUKUS. At the very moment when the EU publishes its first ‘Indo-Pacific strategy’, it is superbly side-lined by a Washington–London–Canberra axis, which presents itself as a new military alliance and which torpedoes, in the process, the Franco-Australian partnership with its contract for the delivery of 12 submarines.

The blow is severe for France, and puzzling for the EU, which has spoken its mind on the matter. But what does it say about NATO? Nothing other than what the US has been repeating since Barack Obama’s presidency: that the US has pivoted and its priorities lie elsewhere.
How to Respond?

The first and most obvious response is to speed up the march towards European defence. I am all for it, I believe in it and along with many others, I will try to make it happen.

If US and European priorities do not always coincide, if Europe’s environment is unstable and its main ally busy elsewhere, then Europeans should close ranks and listen to German Chancellor Angela Merkel, who said back in 2017 that ‘We Europeans truly have to take our fate into our own hands’. Four years later, progress has been made, but there has not yet been a major qualitative leap. If the money is not there – and this particularly applies to Germany – it is difficult to move from words to deeds.

We need a strong transatlantic link, in which Europe asserts itself more and weighs in; but we also need the US to remain engaged

The second response is not a realistic one, and yet it continues to be heard from some French politicians, who are never more Gaullist than during the run-up to an election. ‘Let’s get out of the integrated NATO command!’, argue both Xavier Bertrand – who wishes to be the presidential standard-bearer of the centre-right Republicans – and Eric Zemmour, the far-right journalist who appears to have presidential ambitions. They complain that France’s voice is not sufficiently heard, and yet they favour placing the country on the sidelines. For it is a strange way to seek to exercise and enhance European influence by proposing to reduce it. ‘Leave NATO!’ urges Jean-Luc Mélenchon, the leftist presidential candidate. Though we may salute his persistence, we should not give in to the inconsistency of his argument.

In reality, Macron’s diagnosis – NATO’s weakness – is not good news. We need a strong transatlantic link, in which Europe asserts itself more and weighs in; but we also need the US to remain engaged.

Take the terrorist threat, against which Europe is fighting in the Sahel and the Levant and which is resurfacing in Afghanistan. The US is needed there and its support is invaluable, as every military commander will acknowledge.

But since we are talking about NATO, let us also talk about the Russian threat. There is nothing hypothetical about it, from the occupation of the Crimea to cyber attacks and ‘made in Russia’ disinformation campaigns. On this score, China is also a fast learner. The reality is that the free world is beset by authoritarian regimes which seek to weaken Western democracy. This is not a fantasy. The fact that neither Mélenchon nor Marine Le Pen – the leader of the National Rally (previously the National Front) – seem bothered by this also raises questions.

Those who plead for an equidistance between the US and Russia or between the US and China are guilty of intellectual defeatism. I lived in Washington and I know what makes Europe different. I do not want the US’s internet jungle laws, nor the Chinese ‘social control’ of the internet. But I also know what kind of world I want my children to grow up in, and how important it is to stand up for democracy when it comes under attack.

Europe is going through a Gramscian moment. NATO is weakened; the concept of European defence is progressing but remains to be built; and it is in this chiaroscuro that the monsters tend to appear.

Post Views: 88
Previous Pro-Iran militias warn of forceful response after Israeli strike on Syria’s Palmyra
Next Will China Replace the US in Afghanistan?