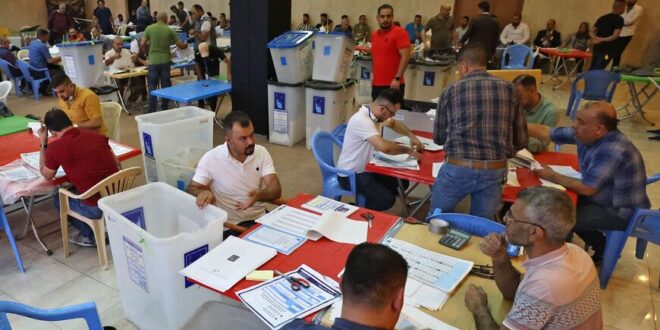 The large backing by the Sunni community for the current parliamentary speaker’s party despite a tradition of voting along tribal lines may mark a break with the past.

Supporters of firebrand Shiite cleric Muqtada Sadr were already celebrating in the streets the night after the Oct. 10 elections while parties more closely linked to Iran made vague threats about what might happen if they were “cheated” out of votes. A week later, relatively minor protests had begun against alleged voter fraud and some threats of violence had begun to circulate.

Meanwhile, the Sunni community seems to have voted mostly en masse for a party led by Iraq’s youngest parliamentary speaker ever, Anbar native Mohammed al-Halbusi. He was named parliament speaker in September 2018, a few months after the previous elections in May of that year.

The Oct. 10 vote was Iraq’s fifth parliamentary elections since the 2003 invasion and was widely seen as its safest yet, with no major attacks or threats reported. Turnout for the vote was poor, however: Less than half the population eligible to do so voted.

Massive protests in late 2019 led the 2018 government to resign and only months later was Prime Minister and Iraqi National Intelligence Service chief Mustafa al-Kadhimi sworn in, pledging among other things to hold early elections after enacting changes to the electoral law. Both pledges were kept.

As expected, Sadr’s Sairoon Party got the bulk of votes with 73 seats going to candidates on that list, according to an initial tally. Though Sadr’s party had received the largest backing in the 2018 elections as well, it gained more seats this time around.

The day after the elections, large billboards of Halbusi and those running with him had been taken down, as had others nearby of his one-time self-declared mentor Mohammed al-Karbouli, who ran with the Azm Alliance under Khamis al-Khanjar and who has long been seen as a very powerful person in the Sunni community in general and especially in western Anbar near the Syrian border, where much of his tribe lives.

Karbouli and his brother Jamal were briefly arrested in April this year as part of a corruption probe. The timing of the arrest, coming as it did shortly after both withdrew from an alliance with Halbousi, raised eyebrows. Both were released and charges were dropped.

Halbusi’s party Taqaddom received around 40 seats out of the parliament’s 329, according to the preliminary results. The Azm Alliance, its closest rival for the Sunni constituency, seems to have got only 15.

Iraq is believed to be about 60% Shiite Arab with significant Sunni Arab and Kurdish minorities. About 95% of the overall population are believed to be Muslim.

Over a week after the vote, complaints continued from the Iran-linked camp. However, it was clear that candidates most closely linked to Shiite parties involved in the fight against the Islamic State as part of the Popular Mobilization Units (PMU) — some of which had existed for many years — did relatively poorly.

Halbusi told this journalist in a 2018 interview in Baghdad when he was still governor of the Anbar region, “We need to cut the transfer [of armed fighters and weapons] from Iraq to Syria,” in reference to Iran-linked Iraqi Shiite militias, some of which also have brigades within the government-salaried PMU. He also posited that Kataib Hezbollah knew what had happened to hundreds of men from his province who disappeared during the fight against IS.

The Fateh Alliance linked to the PMU did poorly in the elections — getting fewer votes than Halbusi’s party — and alleges voter fraud. Some linked to Iran-backed groups threatened the UAE, claiming it had played a part.

Halbusi is originally from the town of Garma (al-Karma) near Fallujah in the eastern part of Anbar, the western part of which shares a long, porous border with Syria.

Sheikh Awwad from the Jughayfa tribe in the western part of the Anbar province told Al-Monitor on Oct. 17 that the support for Halbousi from Iraq’s Sunni community was due to his “political skills” and ability “to read the political map,” saying, “Those running with him had the support of their constituency.”

He added that Halbusi, compared with other Sunni political leaders, is “charismatic and has leadership qualities. He is not restricted to any tribe or clan and was open to a wider range of people.”

Seeming appreciation of Halbousi’s ability to bring in investment for his region and his diplomatic skills may mark a gradual change from the more tribal-dominated politics often seen as inherent in voting in Iraq’s Sunni communities.

Sheikh Awwad said that Halbusi had helped get roads, bridges and hospitals built in Anbar and “return life to normal after the destruction” wrought by the years under the Islamic State and the battles against the international terror group in the province where the last urban centers held by IS in Iraq were retaken only in late 2017.

Sheikh Sabah from the Albu Mahal tribe in the Qaim district along the border with Syria instead told Al-Monitor Oct. 16 via Whatsapp that the election had “gone very badly,” claiming that he had proof of votes having been bought.

Meanwhile, Sheikh Marwan al-Jbara, spokesperson for the Salahhuddin Tribal Council, told Al-Monitor in Baghdad that voter turnout had been painfully low in his province and that the community there “does not believe in the seriousness of the elections or that it will change the reality on the ground in any way.”

He said that in any case, those elected should focus on returning the internally displaced from Salahhuddin, removing militias and reconstructing the cities that were destroyed during the years under IS and the battle to retake the area.