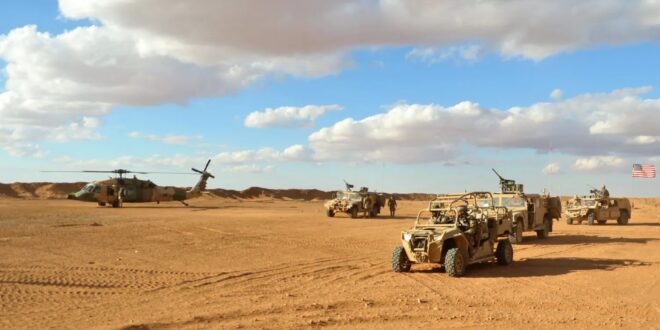 The United States military base at Al-Tanf in Syria was targeted with a “deliberate and coordinated” on Wednesday at approximately 7 p.m., according to the U.S. Central Command (CENTCOM). The base was hit by drones and indirect mortar and rocket fire. There were no casualties among the U.S. troops stationed at the base.

The identity of the attackers is not yet known. However, Iranian proxy militias, run by the Islamic Revolutionary Guard Corps and the Quds Force, are located in the area. They have frequently attacked the U.S. troops both in Iraq and Syria.

A battle damage assessment is ongoing at the base.

“All U.S. personnel have been accounted for… We maintain the inherent right of self-defense and will respond at a time and place of our choosing,” Captain Bill Urban, the spokesman for CENTCOM, said in a statement.

In the past, the U.S. had frequently retaliated against the Iranian-led militias. Nevertheless, it has only done so twice since the Biden administration took office in late January. Iranian militiamen, warehouses, and arms depots have been the subject of hundreds of airstrikes that have been attributed to Israel.

Last week, several Israeli airstrikes targeted Iranian proxy militias in Syria. One of the strikes near Palmyra killed a Syrian pro-regime soldier and injured three others believed to be members of the Iranian-led militias, Syria’s defense ministry claimed.

In February, the U.S. had conducted an airstrike in Syria against two Iranian-backed militias in response to rocket attacks on American forces in the region. Those airstrikes drew the ire of Congressional lawmakers, who said that the president had not asked for the necessary congressional authorization. The White House responded that the airstrikes were backed by Article II of the Constitution as well as the United Nations charter.

The U.S. conducted an airstrike in late June against two of the proxy militias’ operational and weapons storage facilities in Syria and Iraq after a rise in the number of rocket attacks on U.S. troops and bases in the country. The U.S. government had accused the Iranian-led militias of the attacks on U.S. bases.

The American base at Al-Tanf sits on an important land route for Iran that runs from Tehran to Iranian-led militias in Lebanon, Syria, and Iraq. Through this route, Tehran sends arms, ammunition, and rockets to its proxy forces.

The Syrian Observatory for Human Rights (SOHR), a U.K.-based watchdog of the Syrian Civil War, reported that the attack struck near a cafeteria, a mosque, and a food warehouse.

Al-Tanf is located within a 34-square-mile deconfliction zone near the Syrian border with Jordan.

The U.S. has about 900 troops in Syria. These are largely split between the Al-Tanf base and the country’s eastern oil fields. They are working with the Maghawir al-Thawra and the mostly Kurdish Syrian Democratic Forces that are seeking autonomy from the Syrian regime of Bashar al-Assad.

Maghawir al-Thawra posted pictures of a mortar training exercise conducted with coalition forces at Al-Tanf on Tuesday according to SOHR.

Late last month, the U.S. conducted an airstrike targeting a senior al-Qaeda leader in the northwestern city of Idlib in Syria.

Post Views: 102
Previous Ex-German soldiers arrested over alleged terror plot in Yemen’s war
Next Mali has not asked any group to negotiate with Islamist militants