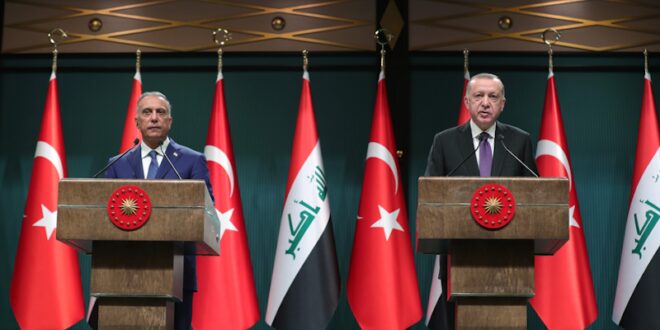 Iraqis went to the polls on Oct. 10 to elect the 329 members of a new parliament, in what is considered one of the most crucial elections since the US-led invasion that ousted Saddam Hussein’s regime in 2003. Iraq historically has been the focal point of Turkey’s regional politics due to its proximity and a failure to ensure security on Turkey’s doorstep.

The outcome of the elections and the new structure of the parliament is of great importance to Ankara, which seeks to maintain close relations with different factions in Iraqi politics in order to preserve its national and strategic interests. Thus, all eyes are on the new coalition government, which is likely to influence the future course of bilateral relations between Ankara and Baghdad.

However, the outcome of the elections, in which about 43 percent of eligible voters cast their ballots, seems to be positive for Ankara, but not for Iran, another actor that competes for influence in Iraq. The Sunnis emerged as the second largest force in parliament and Turkmens entered as a united force. Kurdish parties made considerable gains.

On the other side, the Conquest Alliance, linked to Iran-backed Shiite militia, suffered a major setback. Considering the visits of Parliamentary Speaker Mohammed Al-Halbousi and Kurdish officials to Ankara ahead of the elections, Iraqi observers expect that the new government will enjoy warm relations with Ankara, which considers cooperation with the new Iraqi government critical to its security and political concerns.

The fundamental reason for Ankara’s close interest in Iraq is the presence of the Kurdistan Workers’ Party within the Iraqi territories. The second driving force is the impact of the Syrian war and Iran’s rising influence. Turkey has strengthened joint efforts with Iraqi Prime Minister Mustafa Al-Kadhimi, and previously with the Adil Abdul-Mahdi government, in its fight with the PKK and other terrorist groups, and hopes that it can maintain a similar cooperation with the newly formed government.

A few days after the elections, the Turkish presidency — on Oct. 20 — submitted a motion to parliament to extend the state’s authority to launch cross-border military operations in northern Iraq for another year. The motion, submitted by Erdogan’s government, had previously allowed the Turkish military to carry out cross-border operations from Oct. 30, 2020, until Oct. 30, 2021. Turkey attaches great importance to the territorial integrity, national unity and stability of Iraq, the motion said.

In the past, Turkey’s relations with Iraq have suffered due to the former’s cross-border offensive against the PKK. Baghdad has protested against Turkey’s military operations on its territory and complained about the presence of Turkish troops at the military base in Bashiqa, which Ankara established in 2015 to train local forces to fight Daesh.

However, the Al-Kadhimi government played a significant role in defusing the situation. The existence of the PKK is a fundamental threat for both Turkey and Iraq. Close cooperation between them, and with the Kurdistan Regional Government in Iraq, is required to fight against the PKK. Besides the threats emanating from the PKK, there is also the issue of Iranian influence in Iraq. Turkey’s strained relations with Iraq were playing into the hands of Iran, which has influence on Iraqi politics. However, the outcome of the elections and Turkey’s outreach to Iraq has become important in the sense of not leaving Iraq to Iran.

Besides the security domain, economic and political issues are also motivating factors in Turkey-Iraq relations, as growing trade and energy links in the region are powerful variables informing the two countries’ relations. Iraq represents the third-largest market for Turkish exports, while Turkey’s activities in Iraq include development support, with Ankara announcing in 2019 that it will provide $5 billion in loans for the reconstruction of Iraq — a sign of its commitment to consolidating its influence in the country. Iraq and Turkey also have a joint committee to resolve issues and enhance economic relations. Turkey also backed Iraq’s recent peacemaking efforts in the region.

Thus, geography is the first principle that cannot be changed in international relations, and it is obvious that Iraq and Turkey are central to each other’s strategic calculations. At the end of the day, Turkey and Iraq are interdependent neighbors that need to cooperate on issues such as energy and security regardless of the divisions within the governments of both countries.

Post Views: 94
Previous Hezbollah: We will not be dragged into a new Lebanon civil war
Next US Says Drone Airstrike Kills Senior Al-Qaeda Leader In Syria