Iran’s Defeat In The Second Nagorno-Karabakh War – Part I: Geopolitical And Economic Ramifications

The second Nagorno-Karabakh war (September-November 2020) in the southern Caucasus ended with Azerbaijan’s victory over Armenia, which had held the Nagorno-Karabakh area since the first war between the two countries (1991-94). Azerbaijan’s victory in the war has important geopolitical and economic ramifications for the southern Caucasus region and for the major players in it – Russia, Turkey, and Iran. This series of reports will discuss the ramifications of the war for Iran and its policy in the region.

The War’s Ramifications For Iran

Until the second Nagorno-Karabakh war in 2020, Iran had been able to exert control over its ally Armenia and had direct land access to it, and through it to Europe, with the so-called North-South Corridor. Via this route, Iran was able to transfer goods from its industries, including those under Western sanctions. This land route was also used for the uninterrupted smuggling of goods of various kinds.

Following the November 2020 ceasefire, and Azerbaijan’s insistence,[1] with Turkey’s support, on creating an east-west corridor on Armenian soil – the Zangezur Corridor – linking the Azeri enclave on the Turkish border, the Nakhchivan Autonomous Republic – with Azerbaijan to the east, Iran no longer enjoyed free access to Armenia. The north-south corridor once controlled by Iran was effectively closed by Azerbaijan, with tax roadblocks for inspecting all cargo and charging customs for all trucks from Iran travelling northwards.[2]

This development, and particularly Azerbaijan’s inspection and taxation of northbound truck traffic from Iran, prompted rage in Iran, and in late September 2021 it conducted two surprise military exercises, dubbed “Conquerors of Khaybar,” to intimidate Azerbaijan. Iran’s ideological camp and regime circles issued a series of direct threats to Azerbaijan, inter alia underlining its ability to launch thousands of missiles against the Azerbaijan capital Baku and to direct ethnic populations against Azerbaijan and its patron Turkey.

For example, Hassan Hanizadeh, an Iranian political analyst who is close to Iran’s Islamic Revolutionary Guard Corps (IRGC), hinted that Iran could use the Azeri, Shi’ite, and Kurdish ethnic groups against Azerbaijan.[3] Also, the IRGC unveiled, via its media outlets, the previously unknown “Hussainiyoun” Azeri Shi’ite militia established in the Caucasus by the late IRGC Qods Force commander Qassem Soleimani.[4] These media outlets also recently boasted of a Qods Force operation to kidnap Azeris on Azerbaijan soil in collaboration with this militia, and challenged Azerbaijan President Ilham Aliyev, asking whether “Aliyev has the courage now to threaten Iran.”[5]

In October 2021, operating in the diplomatic arena, Iran sent Foreign Minister Hossein Amir-Abdollahian to high-level meetings in Russia in order to gain Russian political backing for Iran’s opposition to what it called border changes in the southern Caucasus. So far Russia has not complied with the Iranian demands, inter alia because it itself is party to the Armenia-Azerbaijan ceasefire agreement that it mediated – Russia is guarantor of the security of the transport arrangements set out in in the agreement.[6] Russia also does not want a stronger Iran or a stronger Armenia, Iran’s ally, whose prime minister Nikol Pashiniyan is known to be close to the U.S.

Further strengthening its claims against Azerbaijan, Iran accused it of allowing Israel to establish a military presence on its soil, in the form of military bases at the Azerbaijan-Iran border. This presence, it said, was aimed against Iran. Iranian regime officials and the Iranian media leveraged this claim to warn and threaten Azerbaijan, lest it allow what they called enemy forces from outside the region to impact the balance of power and impose geopolitical change at the borders.

Iran sees itself as an influential regional force with troops that is spreading its vision of a ruling order with the values and ideology of its Islamic Revolution, and prides itself on its glorious imperial heritage. As such, it takes a negative view of Azerbaijan’s geopolitical and economic gains on its border at Iran’s expense. It also finds infuriating the fact that Azerbaijan – its younger, smaller neighbor established on land torn away from the Persian Empire whose largely Shi’ite population, albeit secular, has a great deal in common culturally and historically with Iran, and which Iran thinks should by rights be closer to it – is shifting the balance of power in its own favor and in favor of Turkey, Iran’s greatest rival for areas of influence in the Caucasus.

Iran’s apprehensions about losing political influence and trade supremacy in the region following its loss of the north-south corridor to the Azerbaijan-Turkey axis are growing even more in light of the potential ethnic threat that Azerbaijan poses as the Azeri nation-state. Two-thirds of the Azeris in the world live in Iran’s north and constitute 24% of that country’s population; the other third lives in Azerbaijan itself. Iran fears stronger Azeri nationalism and separatism, as well as possible demands by the Azeri regions of northern Iran to secede and join Azerbaijan – as was hinted at during and after the 2020 Nagorno-Karabakh war.[7]

These fears, together with what Iran considers the Israeli-Turkish scheming against it, along with many Iranians’ sentimental links to Persian Empire territories lost to Czarist Russia due to Persian weakness, were described accurately by Ahmad Dastmalchian, a former senior official in Iran’s Interior and Foreign Ministries and former ambassador to Lebanon and Jordan, and former head of the Iranian consulate in Saudi Arabia. On October 17, 2021, he warned Azerbaijan President Aliyev not to challenge Iranian sovereignty, and even threatened his survival and the survival of his regime:

“What Azerbaijan is doing together with Turkey and Israel is an Israeli project… The Zionist regime wants a presence at Iran’s borders. Israel seeks to create a domino effect by inciting ethnic minorities in the region, if it can manage to foment unrest – thus harming the authority of the governments of the states in the region and establishing autonomous minority governments… The Zionist regime seeks a war between the border cities of Iran and Azerbaijan, [countries] that were [once] actually one single [state – i.e. the Persian Empire], and for Turkey too to help with this plan…

“Obviously, Iran has taken strategic deterrent [measures – i.e. the Conquerors of Khaybar military exercise] and in my view this is the best response that resulted – [a response] with strength. Iran has sent a good message to the neighboring countries, i.e. that it does not accept any geopolitical change of borders, and this is a firm stand.

“[President] Aliyev in Baku must know that [if] he takes a step, [even] the smallest step, against Iran’s security, he will receive a powerful slap. Iran has proven that it does not compromise on its security. Aliyev must know that [the ground] is shaking under his feet. Therefore, he must emerge from this delusion [of carrying out activity against Iran]. If he wants to play with Iran’s sovereignty, he is playing with his own life and existence. Iran’s political and military leaders have done a good job of clarifying this.”[8]

In effect, Iran is trying today to change the outcome of the war, or at least to influence the shaping of the new power relations in the southern Caucasus that are emerging following the war. Along with its military threats in the form of exercises at its border with Azerbaijan, and the escalating declarations, it appears that the Iranian regime is seeking to obtain its goal primarily via direct pressure through diplomatic channels with Azerbaijan and also with its rivals in the region, Turkey and Russia.

The Caucasus region, where Azerbaijan, Armenia, and Georgia are now located, were part of the 19th century’s Qajar Persian Empire. Following the empire’s defeats at the hands of Czarist Russia, the subsequent humiliations of the Treaty of Gulistan (1813) and the Treaty of Turkmenchay (1828), the areas north of the Aras River were handed over to Czarist Russia’s control, and later became the independent states of Azerbaijan and Armenia. The territories south of the Aras remained under Iranian control. However, the territories lost by the Persian Empire due to its weakness are perceived by many Iranians to remain connected to Iran.

The Gulistan Peace Treaty was signed between Czarist Russia and the Persian Empire of the Qajar dynasty in October 1813, in the village of Gulistan in Nagorno-Karabakh, following the Persian defeat in the Russian-Persian war (1804-1813). As part of the treaty, Persia was required to hand over most of the territories that make up today’s Georgia and Azerbaijan: the khanates of the south Caucasus – Karabakh, Ganja, Sheki, Shirvan, Derbent, and Baku – and to relinquish any claim to the regions of Dagestan, Georgia, Mingrelia, and Abkhazia. In addition, Persia lost all maritime rights to the Caspian Sea, and was forced to grant Russia free trade access across all Persian territories. The treaty enraged the people of Persia, and was one of the factors leading to the fall of Fath-Ali Shah Qajar.

The Treaty of Turkmenchay, 1828

The treaty of Turkmenchay, which ended the Russian-Persian war of 1826-1828 with a Persian defeat, cemented the borders between the two until the early 20th century, and set the borders of the independent states of Azerbaijan and Armenia. In the Persian village of Turkmenchay, in February 1928, it was decided that the territory of the Nakhichevan khanate would be absorbed into the Yerevan khanate (which comprises most of Armenia’s territory today), and handed over to Russia. Due to some clauses of the Turkmenchay Treaty, the authorities of Czarist Russia encouraged Armenians to migrate from Persia and Turkey to Nakhichevan, causing tension between the Christian Armenians and local Muslims. In addition to losing the territories of the south Caucasus to Russia, Persia lost maritime rights to the Caspian Sea, and was forced to allow a Russian trade delegation access to all Persian territory, and to allow Russian merchants access to conduct trade in all areas of Persia. It was also required to issue an apology for its violation of the Treaty of Gulistan. 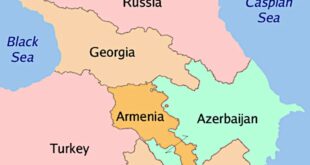